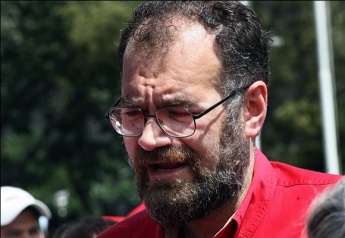 Different motives are being considered for the incident. Police authorities have suggested that the attack was an attempted robbery of the state official’s vehicle.

However several public figures and Saman himself are convinced the attack was an assassination attempt against the official in order to weaken the government of Nicolas Maduro and its regulatory policies toward the private sector.

Eduardo Saman is the president of the Institute for the Defence of People in Access to Goods and Services (Indepabis), a state agency which enforces price controls and other regulatory economic measures.

Regarded as a radical figure in Chavismo, since appointed to the job in June he has promised to improve the effectiveness of Indepabis and warned speculators in the private economy that “the fun is over”.

The attack occurred around midnight on Wednesday as Saman was driving out of Indepabis’ central office in Caracas. According to police reports and Saman’s personal account, three individuals armed with handguns and grenades appeared from a vehicle and began firing at Saman’s armoured SUV.

Saman managed to drive away from the attackers and escape while his escort guard confronted the attackers, killing one outright. Both of the other individuals later died; one who apparently detonated a grenade on him/herself while fleeing capture, and the other from wounds in hospital.

The incident provoked solidarity and concern from government officials and supporters. Ernesto Villegas, the former information minister and current candidate for metropolitan Caracas, wrote on twitter, “Solidarity with Eduardo Saman, the target of a strange “assault” with grenades”.

Meanwhile socialist lawmaker Adel El Zabayar, who recently returned from a visit to his ancestral Syria, argued that, “The characteristics of the attempt against Saman demonstrate that we are now in the presence of mercenaries and terrorist groups in Venezuela”.

Some figures speculated as to whether the incident was an attempt to repeat the tragic fate of Daniel Anderson, a state prosecutor who was in charge of investigating the cases of those accused of participating in the April 2002 coup against the government of Hugo Chavez.

Anderson was assassinated on 18 November 2004 when two car bombs were detonated while he was driving his vehicle.

Jesus Silva, a constitutional lawyer and university professor, called on authorities to act to avoid the same happening to Eduardo Saman.

“I know Eduardo Saman personally…I respect him a lot and I know he has enemies in the capitalist and speculative sectors who could try to eliminate him,” he wrote on website Aporrea.

“It would be unpardonable for such a valuable comrade who works for the food security of Venezuela to become a victim of assassination due to the lack of action of those who are called upon to strengthen his system of protection,” continued Silva.

Venezuela’s scientific criminal investigation police (CICPC) are investigating the incident, and have stated that while it is too early to confirm a definite motive, they are working on the assumption that the attack was an attempted robbery.

“We are undertaking the investigation, we have elements which suggest to us that this is about common criminals who tried to commit theft,” said CICPC national director Jose Gregorio Sierralta yesterday.

The CICPC official added that one of those involved in the attack had been identified as Kenny Johan Nieto Viloria, 28, who had a previous history of drug-related crime. Further, the vehicle used in the attack was a stolen car.

Today Eduardo Saman gave his personal account of the incident. The official disputed the motive of robbery for the attack, and asked authorities to investigate more deeply.

“My impression of the incident is that those people were trying to kill me. They weren’t trying to take the van,” he said in an interview with ALBA Ciudad radio.

“When I was leaving [the Indepabis office] in an armoured van, a vehicle cut across the entrance of the institution and three people got out and began to fire. They didn’t say it was an assault or anything. One of them fired at me twice, at the driver’s window, right at my face. Luckily the bullet proofing resisted…each one [also] carried a grenade.”

Saman emphasised his impression that, “The attitude of the aggressors was not that of someone who wanted a van. They didn’t ask us to get out. They went straight to the window and fired”.

The Indepabis president explained that he used his SUV to push aside the aggressors’ car and was able to escape while his bodyguard escort confronted the armed individuals.

According to Saman, the individual who died by self-detonating the grenade did so on purpose to avoid capture, after police intercepted the attacker’s escape effort.

“This isn’t a vulgar car thief, a car thief doesn’t head off running with a grenade,” he argued.

The official also stated his conviction that the attack was related to his work for the government and the “economic war” over food shortages and currency speculation, which the government blames on a deliberate sabotage attempt by the conservative opposition.

“We’ve assumed this as an economic war with different components, the aggressors [the opposition] will go from subtle sabotage to one that is sharper and more drastic, and they’re going to begin aggressions against those who participate [in the defence of government policy and the Bolivarian revolution],” said Saman.

As a response to the attack, the security of all regional Indepabis officials will be strengthened. Saman confirmed that he would continue in his post, declaring, “Actions like these won’t stop us”.