Continuing the 'Revolution of the Revolution' 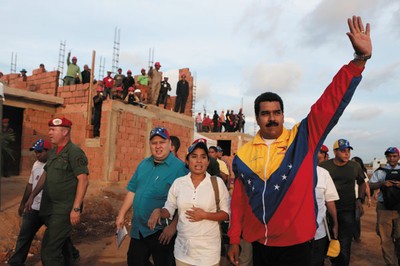 Proving he is prepared to put action to his words Maduro has continued his 'Revolution of the Revolution' in the recent week. Cracking down on corruption Maduro has stepped up his governmental campaign and requested an enabling law in the National Assembly last week. Speaking on 8 October he demanded that 'The era of institutional corruption should come to an end in Venezuela' with 'zero tolerance.....no matter their political colour'.

Whilst the process may take many weeks the crack down on corruption continues with the high profile  arrest of Valencia mayor and United Socialist Party of Venezuela (PSUV) member Edgardo Parra on 11 October for a range of corruption crimes.  Parra has been charged with extortion, criminal association and corruption

.Rooting out corruption is absolutely essential to driving forward the struggle for socialism in Venezuela, a failure to do so will cost the Bolivarian Revolution its moral authority. This requires fundamentally addressing Venezuela's heritage as an under-developed country dependent on exporting oil, a phenomenon Chavez referred to as the 'oil-rentier state'. Unravelling this culture of pervasive corruption and materialism will take huge advances in the construction of socialist consciousness and significant inroads into undermining the law of value in Venezuela. As 70 % of the economy is still in the hands of private companies and oilaccounts for around 90% of export earnings,building a society driven to meet the needs of people not profit, will initially mean diversifying the oil dependent economy, and removing ruling class control over key economic sectors, principally finance, food production, and food distribution.

As Venezuelanalysis reports, the mobilisation of the Venezuelan people will be key 'Earlier this month 326 people finished their training to become “socialist inspectors” as part of the government’s anti-corruption plan. They form part of a total of 800 such inspectors who have been trained to inspect food, health, communal, land, infrastructure, and education projects for corruption and assess their advancement. The government is aiming for a total of 4,000 such inspectors.'

A further offensive against corruption will come from the system of 'street governments' Maduro has been pioneering since his election in April. As detailed in Ewan Robertson's article 'Venezuelan President Maduro Launches Second Phase of Street Government' the street government system aims to forge close links with regional community organisations, agreeing development projects and increasing the role of communas is the implementation of public projects. Maduro emphasised that the second stage will be based on 'Three Is: inspection, initiation and inauguration', monitoring and revising projects already agreed being vigilant in the battle against corruption and mismanagement of funds.

As Maduro declared 'In this stage of the Street Government there’s a central objective: consolidate the construction of communes, accompany the people…giving them tools, power and knowledge, and the economic power to undertake their public works'

The connection between building participatory democracy and rooting out corruption is key to the progress of the fight for socialism in Venezuela.