Published on 22 July 2014 by www.venezuelanalysis.com 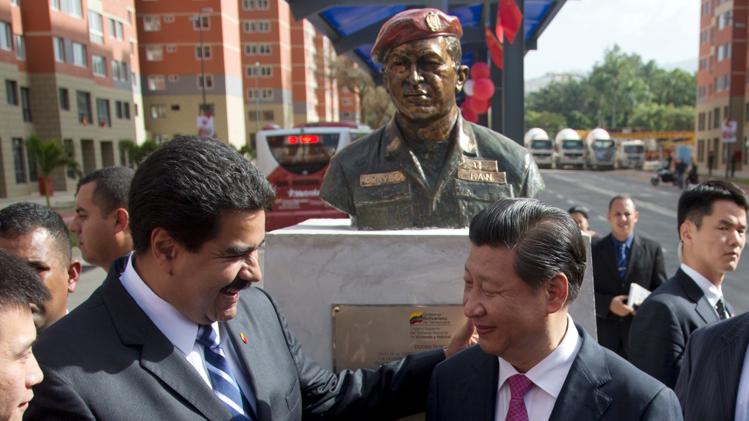 Venezuela has signed 38 agreements worth US$18 billion with China, signaling a deepening of the two countries’ relations.

The accords include a US$4 billion direct loan for Venezuela and US$14 billion in Chinese financing for development projects in energy, mining, industry, technology, communications, transport, housing and culture.

During the high level bilateral meeting’s closing ceremony President Maduro said that the two governments had agreed to elevate their relations to a “comprehensive strategic association”.

“We find ourselves in a new political moment, forging, in this act, a new historic stage for the strengthening of relations for the wellbeing and prosperity of our countries,” he said.

Meanwhile Chinese premier Xi Jinping stated, “We want to promote the social and economic development of our respective countries and achieve constant improvement in our significant cooperation”.

Sino-Venezuelan relations have increased greatly since 2001, when former president Hugo Chavez sought to build a strategic alliance with the country as part of a policy to create a “multi-polar world” and counteract US global hegemony.

As a cornerstone of the relationship, China aids Venezuelan development with loans, technology transfer and joint projects. These loans are paid for in kind through oil shipments, while many Chinese firms gain access to the Venezuelan market for the export of their goods.

Since 2001 Venezuela and China have signed 480 cooperation agreements and participated in 143 joint projects. According to Blouin News, from 2005 – 2012 China lent Venezuela US$47 billion, accounting for 55% of Chinese credit issued to South American nations in that period.

Venezuela’s Vice President for the Economy, Rafael Ramirez, told investors last month that much of this debt had been paid back, and that outstanding debt with China was $17 billion, and not the $40 billion that markets had been estimating.

Opposition leader Henrique Capriles has publically criticised the agreements with China, arguing that the financing only benefits “those with connections”.

“If we’re the country with the greatest oil reserves in the world, why do we have to indebt ourselves to China? Our debt with China is equivalent to twice our reserves,” he claimed on Twitter.

Capriles, who is also a state governor, argued that the money from the loan deals was siphoned off by allegedly corrupt officials and not invested as promised, citing examples of what he said were unfinished projects financed under previous agreements.

Government officials defended Venezuela’s relationship with China as the deals were signed. President Maduro argued that the loans did not represent a heavy debt burden for the South American OPEC nation.

“The financing doesn’t put heavy debt on our country because it’s backed up by a formula of production and supply of oil that now amounts to 524,000 barrels to China daily,” he stated.

Ramirez also argued that the agreements were beneficial for Venezuela’s development, stating, “Through this cooperation scheme our energy potential acts as a base so that China can give us the financial support that is going to allow us to diversify our economy and support development projects in the [2013 - 2019] National Plan”.

Chinese president Xi Jinping visited Venezuela as part of a South American tour to deepen economic ties with the region. Other destinations include Brazil, Argentina and Cuba.