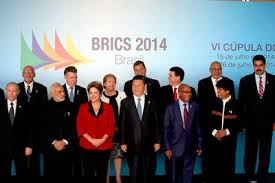 Venezuelan President Nicolás Maduro said on Wednesday that the meeting between heads of states of BRICS nations (Brazil, Russia, India, China and South Africa) and of UNASUR nations (Union of South American Nations) will foster an alliance that will ensure peace and prosperity for the region.

“Without a doubt, the meeting between BRICS and UNASUR is historic.  A South American bloc that is on its own path in terms of the economy, culture, politics, jurisdictions, of South American identity … [and] five of the most important emerging nations at the time” is a great alliance, the President said upon arriving in Brasilia.

He also noted that such an alliance would “correct the injustices of neoliberalism that privileged speculative capitalism in the world, that privileged looting through financial speculation, as in the case of our Argentinean sibling and the vulture funds.”

Maduro said that the establishment of new financial mechanisms, such as the Development Bank and Reserve Fund proposed by BRICS, will contribute the necessary resources to invest infrastructure projects and will compensate for the lack of credit being given by the main international financial institutions, such as the International Monetary Fund and the World Bank. “These are the issues raised by our giant [Hugo Chávez],” he continued.

“These are the great global alliances of the 21st century for peace and prosperity.  A new world is emerging,” the President declared.

He then added that the processes of change have already begun through the bilateral relations between BRICS countries and Latin America and the Caribbean, “which has created a new dynamic of confidence, because our countries only used to look north.  Now we look towards the entire world and win-win alliances have been set up to the technological, economic, cultural and financial benefit of our countries.”

President Maduro stressed that “another key element has been Brazil, which, without a doubt, has played a role of positive leadership with President Lula [Luiz Inácio Lula da Silva] and President Dilma [Rousseff].  It has been virtuous leadership to unify Latin America with the emerging world.”

Maduro was received at the Brasilia airport by the Venezuelan Ambassador in Brazil, Diego Molero.  The President was accompanied by his wife Cilia Flores; Foreign Minister Elias Jaua; the Minister of the Office of the President, Carlos Osorio; and the Minister of Communication and Information, Delcy Rodríguez.

The meeting, which is the first between these two blocs, will take place in Itamaraty Palace, which is home to the Brazilian Foreign Ministry.