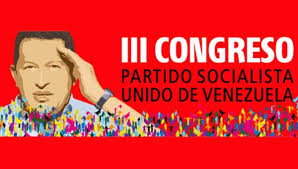 President Nicolas Maduro was elected this Saturday the leader of the United Socialist Party of Venezuela's (PSUV) during the first day of the Third National Congress of the ruling political institution in the country's capital Caracas.Maduro delivered a speech to the Congress at the Teresa Carreño Threatre in which he expressed solidarity with Cuba and the rest of Latin America.
"The Third Congress will permit us to unify the party in order to continue with the revolution," he said. “Venezuela is admired from the four corners of the planet because of this historic and heroic feat to construct a socialist model for the 21st century.”Maduro asked the 985 delegates at the theater to take advantage of this “congress because it will be historic for the future of our country.” He said thatChavistas “are in love with the right of the people to be free and create socialism.”
The president said the main objective of the event “is a live congress that seeks debate. It does not avoid criticism and opinion, because this revolution that was born thanks to Chavez lives on criticism from the people and from internal review,” he added. The delegates of the PSUV also named Former President Hugo Chavez the eternal leader and founder of the party.
This is the first national congress since the death of Chavez in March 8, 2013, and the third since the formation of the party in 2008.During this edition, the socialist leaders of the country expect to consolidate the Bolivarian Revolution and define the actions for the coming years with the outstanding participation of its activists.The leadership has also urged delegates to consider proposals to consolidate the social reforms and programs initiated by Chavez in 1999. The conference, which ends on Thursday, is being attended by 985 delegates, of which 537 were recently elected by PSUV members.
The delegates represent 7.6 million members of the largest political movement in the country. Among the new delegates is Nicolas Ernesto Maduro, son of President Maduro.The PSUV leadership has urged its members to review the whole structure of the organization, defining the pragmatic and ideological lines, as well as international politics and its relationship with other leftist parties in the world, especially in Latin America and the Caribbean.The conclusions and decisions of the III Congress will be collected in at least ten books with documents and proposals made from the PSUV's grassroots.