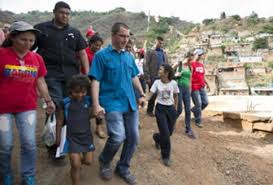 The Venezuelan government has initiated its policy of expanding social programs in the country’s most deprived areas in a bid to eradicate extreme poverty.

The initiative, called “Red Sundays”, sees multidisciplinary teams of social program workers visiting poorer communities every Sunday to diagnose which households are deprived of certain basic needs and which social programs are required to attend to these needs. The workers also take the opportunity to directly attend to the health or other needs of the people they encounter.

The information gathered during the visits is then used to strategically plan the construction of special attention points called Social Mission Bases in poorer communities. The attention points are community centres housing different social programs such as free health clinics, educational and cultural programs, and subsidised food stores.

The government plans to construct around 1,500 Social Mission Bases. Authorities calculate that extreme poverty still exists in areas within 255 of the country’s 1136 local districts.

For example, yesterday social program workers visited a barrio (community of informal urban housing) in the Southwest city of Barinas, where a site was chosen for the construction of a Social Mission Base. Community doctors attended to patients in their houses, and a commitment was made to ensure that all children in the community have access to schooling.

Meanwhile in the barrio of Antimano in Caracas, Vice President Jorge Arreaza participated in a community visit where unstable housing was evaluated.

Commenting on the visit and the expansion of social programs in impoverished communities, Arreaza said, “The most important thing is to construct solutions with the people. [In this community] a good part of the housing needs to be evaluated and relocated: we need to have policies for every area and family”.

“What we can’t do is remain with arms folded in the presence of poverty. We’ll do whatever we have to do,” the vice president told national media.

Structural poverty, which is a non-monetary indicator based on the satisfaction of needs such as access to education, adequate housing and public services, decreased from 29.9% in 1999 to 19.6% in 2013.

Meanwhile extreme structural poverty decreased from 9.9% to 5.5% in the same period, reaching a record low last year. Venezuelan president Nicolas Maduro has pledged to eradicate extreme poverty by 2018, and the Social Mission Bases are held as a strategy to help accomplish this.

However, income-based poverty actually rose last year, which was likely caused by high inflation and other economic problems currently being experienced in the South American country. Nevertheless the overall effect of recent fluctuations in income poverty has been to maintain the poverty rate at the historically low level reached in the post 2007 period.