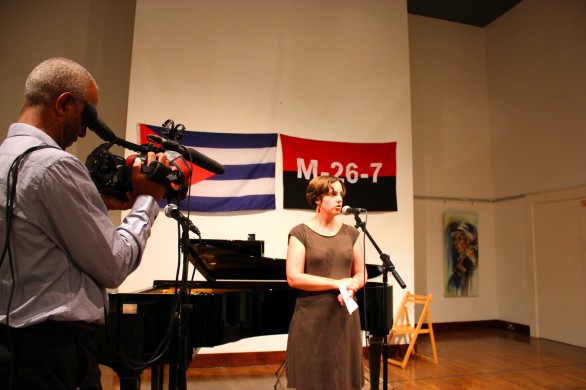 On Saturday 20 July, Cubans resident in Britain were joined by other supporters of the Cuban Revolution in a vibrant celebration to mark the 60th anniversary of the attack on Monaca Barracks which sparked the Cuban revolution in 1953. A diverse audience, from babes to pensioners, packed into Bolivar Hall, the cultural venue of the Venezuelan embassy for an afternoon of cultural entertainment.

The event was organised by Rock around the Blockade and Cubanos en UK and supported by the Cuban embassy, along with other Cuban artists in Britain.

There were free mojitos for the early-comers, kids’ games, face-painting and Cuban-style beef sandwiches. Before the performances, the event was officially opened by Counsellor Alvaro Sanchez, speaking on behalf of the Venezuelan embassy. Next Ricardo Lamas from the Cuban embassy emphasised the importance of the event. A speaker on behalf of Rock around the Blockade emphasised the importance of Cuba’s socialist alternative at a time of class war against the poor here in Britain. Two speakers for Cubanos en UK, said that contrary to the media portrayal, there are many Cubans who emigrate from Cuba to Britain for various reasons and remain as supporters of the revolution and all it has achieved. Their contributions made the event possible.

The performances were opened by a young poet, Leo and a young singer, Max - both aged ten. We were then treated to performances from a range of talented musicians, starting with famous Cuban violinist Omar Puente who, accompanied by Al MacSween on the piano, stunned his audience with his power and skill. The delight continued with the beautiful voice of Cuban singer Jose Alejandro followed by a combined performance of Latin American singers and musicians Betty Rhaza, John Cuevas and Fernando Vergara.

DJ Armando Lao Álvarez did a great job keeping the rhythm going throughout the day. The room itself was decorated by enchanting exhibitions by Cuban painter Sarahy Martinez and photographer by Alejandro Gortazar. All of these artists and musicians donated their talents for free and we are extremely grateful for their support.

The turnout of the event was excellent - a great mix of art, music, politics and socialising. Thanks to the Venezuelan embassy for providing the venue and a massive thanks to everyone who showed up and enjoyed the afternoon with us.