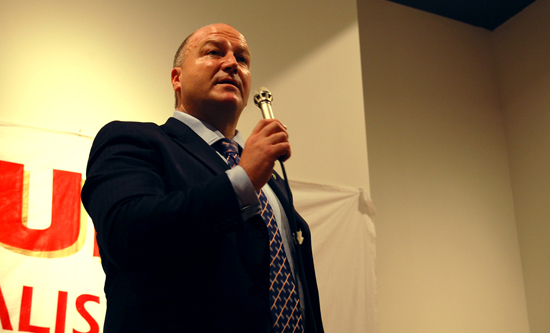 The Revolutionary Communist Group and its campaign in solidarity with socialist Cuba, Rock Around the Blockade (RATB), send their condolences to the family, friends and comrades of Bob Crow, who died this morning. Bob Crow was the militant and vociferous General Secretary of the Rail Maritime and Transport (RMT) union, one of only two major British trade unions to have disaffiliated from the Labour Party.

Bob Crow took a principled stand in solidarity with socialist Cuba and RATB was pleased to host him at the launch event of our 2008 speaking tour with Che Guevara’s deputy Orlando Borrego and two other Cuban representatives. The RMT sponsored the speaking tour and Bob Crow publicly condemned the sectarianism of those who opposed the RMT’s support, as the video of his speech shows. He defended Cuba’s right to self-determination and supported its struggle for socialism.