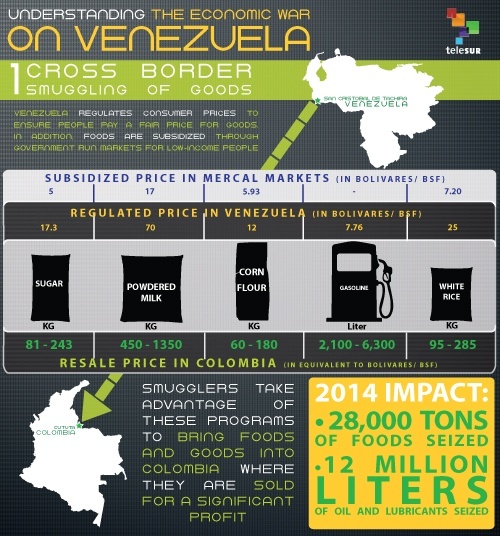 Venezuelan and Colombian foreign ministers will meet today to discuss the issues surrounding Venezuela’s border closure and the crackdown on smuggling and undocumented Colombian immigrants in Tachira state, amid rising controversy.

Maduro closed the border between Tachira and Santander after three Venezuelan soldiers were attacked by alleged paramilitaries last week. The closure was soon extended to a 60-day state of exception- similar to a state of emergency but without the suspension of human rights- after Venezuelan authorities assessed an alarming level of smuggling and paramilitary-related violence in the region.

Santos also warned of politicians using the situation as a political platform, as Uribe visited the border area and fanned the flames of resentment in communities that were economically dependent on contraband gasoline and Venezuelan goods.

“Its not the time to sound the trumpets of war,” Santos rebuked, “It’s time for firemen to step in, not pyromaniacs.”

Right wing forces, incapable of recognizing the electoral victories of popular governments, consistently resort to violent action, as is currently happening in Ecuador. After the failure of a general strike called for August 13, the opposition here launched another adventure, blocking roads - including the Pan American Highway – burning vehicles and tires, in an attempt to lay the groundwork for a coup d’etat against President Rafael Correa and the Citizens’ Revolution.

Police have quickly re-opened roadways and detained rioters attempting to pressure Rafael Correa with these maneuvers, which began this past June as supposed protests against proposed tax laws regarding inheritances and earnings. It soon became clear that the issue was a pretext for disrupting the government, in hopes of precipitating a coup, but the opposition has reaped few political dividends.

On the contrary, despite the opposition’s counterrevolutionary flag-waving, the population supported Correa’s policies with demonstrations August 13, without going on strike, while messages of solidarity arrived in Quito from political and social organizations across the country.

Normality reigned in Ecuador’s principal cities on the day of the attempted general strike, much to the chagrin of the opposition, led by well-known members of Ecuador’s elite who depend on a few leaders of Pachakutik, a faction within the Confederation of Indigenous Nationalities of Ecuador (Conaie) and the Workers United Front.

Unity for a Socialist and Revolutionary Colombia: Interview With Carlos Lozano

Published on 5 August 2015 by CounterPunch

In a recent interview Carlos Lozano, a leader of the Colombian Communist Party (PCC) and director of the Party’s weekly Voznewspaper, offered a sobering appraisal of the likelihood that talks underway now in Cuba between the Revolutionary Armed Forces of Colombia (FARC) and the Colombian government will lead to peace with social justice.

He alluded to historical affinities between the FARC and his own Party, thereby raising the possibility that these two Marxist – oriented groups, together in the past and then apart, are finding common ground once more. He speaks of nationwide struggle toward socialist, anti-imperialist revolution. That’s an uncommon narrative these days. 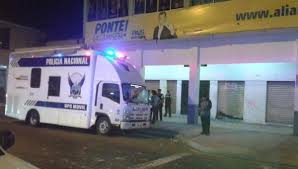 A bomb damaged the headquarters of the ruling PAIS Alliance party in the coastal city of Guayaquil, Ecuador's largest city, late Monday night, which a PAIS legislator has labeled a “message of terror.” The bombing took place around 10:40 p.m. Monday. No details were released regarding possible motives or suspects.

While no one was injured, the bomb was strong enough to damage the concrete wall and sent debris into the adjacent street. PAIS legislator Bairon Valle said the explosion was felt in a three-block radius. "This was not a household item,” Valle said, according to national newspaper El Telegrafo, “but a high-caliber bomb, strategically placed to destroy the entire first floor of the building."

Published on 13 July 2015 by www.venezuelanalysis.com. The interview was first broadcast on TeleSUR 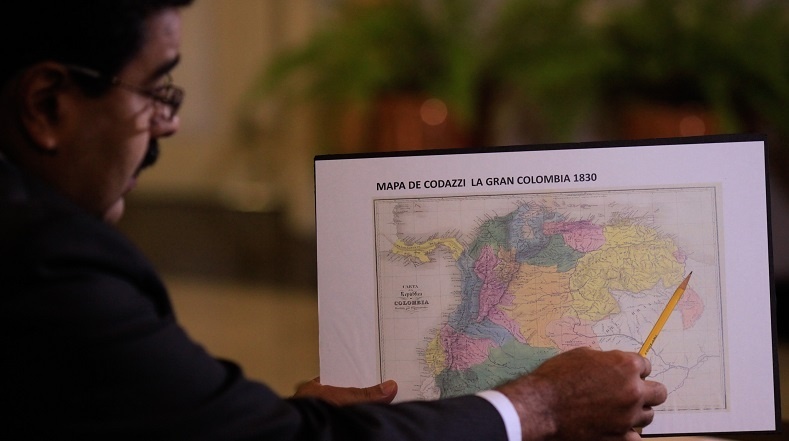 From the Peruvian Sun Hall at the Miraflores Palace, teleSUR’s Tatiana Perez and Rey Gomez spoke to President Nicolas Maduro about the government’s plans to recover the disputed territory, which Venezuela believes was taken from it illegally by the British Empire.

Mr. President, welcome, thank you for taking the time to talk to teleSUR.

Welcome to you too, to the house of the Venezuelan people, Miraflores Palace, with the liberators Simon Bolivar and Antonio Jose de Sucre, who perfectly set the spirit for this conversation.

I want to begin this interview with a current issue in Venezuela: the political dispute that exists over the Essequibo region. Why has this issue emerged? Why this change in Guyana's position?

It is a topic that has spanned Venezuela’s history over three centuries: the 19th, 20th and now 21st. I gave a comprehensive explanation in the National Assembly of the key elements of this theme, which can be split into four stages.

Ecuadoreans rally in Quito in response to opposition protests

Published on 26 June 2015 by TeleSUR English

Supporters of the Ecuadorean President Rafael Correa rallied in the capital Quito Friday as a response to opposition protests the day before, when opposition supporters chanted “Out, Correa, Out.”

“The debate that Correa is proposing is what type of society we want, how do we change it?” one person at the rally told teleSUR. "We want the opposition to reflect and not to seek the removal of the president … We mobilized to support the president peacefully, so we are ... happy," Andrea Benavides, who left work to join the rally, told the national El Telegrafo newspaper.

Nathaly Molina says she is convinced that Correa had done important work for the country and thus she did not agree with the opposition mayors of Quito and Guayaquil in their effort to "confront the government that cares about the disadvantaged sectors of the country." "I come to defend the democratic process, because I do not agree with few people who want to get rid of the president for their own convenience," said Esteban Cordova, who at the pro-Correa rally.

Demonstrators said they were planning to stay outside the palace until late Friday night, after the opposition march yesterday tried to break through police cordons to reach government supporters and the palace.

Statement from the Revolutionary Government of Cuba on situation in Ecuador 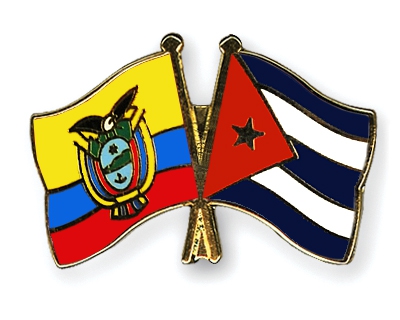 Since this past June 8, the government of Ecuador, led by President Rafael Correa Delgado, has faced, in several cities, acts of violence and calls for the overthrowal of the Citizens’ Revolution government.

Oligarchic groups, supported by the media, Internet social networks, and the transnational press are attempting to discredit the legitimately constituted government, generate a crisis, and unleash violence in a stable, peaceful country.

President Correa and other leaders of the Alianza País movement have energetically denounced this new coup attempt, and have taken the lead in popular mobilizations in defense of the Citizens’ Revolution, and rejected a plan, which according to reports, could be receiving support from abroad.

Given the events, which appear to be following the same destabilization script used against other progressive governments in the region, the Revolutionary Government of the Republic of Cuba expresses its firm, unconditional solidarity and support to the sister people of Ecuador, to the government of the Citizens’ Revolution, and its leader, compañero Rafael Correa Delgado. At the same time, we insist on respect for Ecuador’s legal order, and energetically reject any interference in the country’s internal affairs, in accordance with the principles established in the Proclamation of Latin America and the Caribbean as a Zone of Peace.

6 key points about the opposition protests in Ecuador

Published on 13 June 2015 by TeleSUR English 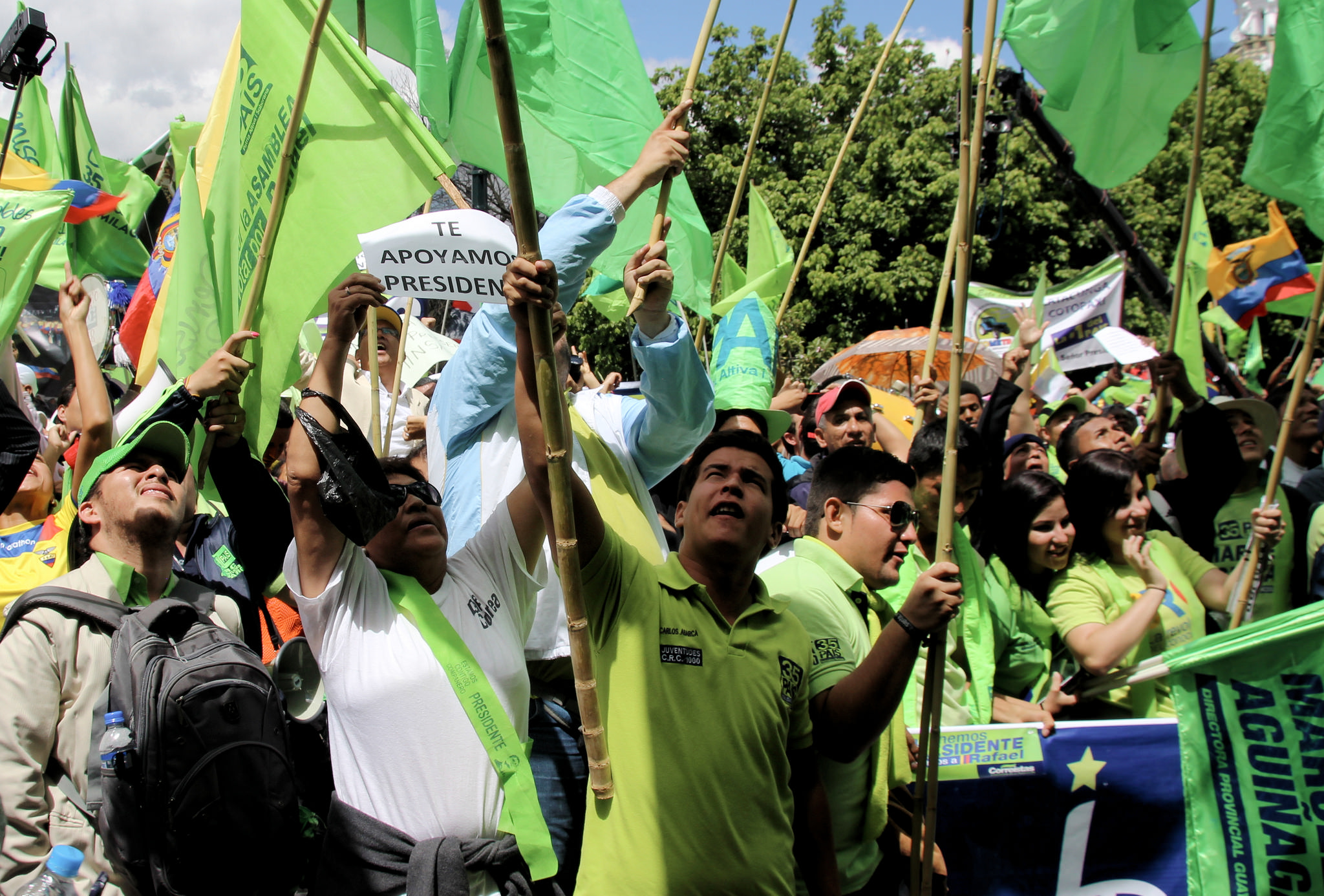 Privileged and right-wing sectors in Ecuador have been holding anti-government protests across the country since last Monday. Since June 8, right-wing opposition demonstrators have protested daily outside the headquarters of the Ecuador’s governing party in Quito. The protesters initially came out in the streets in response to proposed revisiones to legislation on inheritance and capital gains taxes, which would see the wealthy and upper middle classes paying more. However, the right-wing protesters are now openly calling for the ousting of the elected government of President Rafael Correa. Correa was elected in a landslide victory in 2013 with 57 percent of the vote. Meanwhile activists who support the Citizens revolution in Ecuador have mobilised to defend Correa and the social achievements gained under his presidency. (pictured)

1. This is a Rebellion of the Wealthy 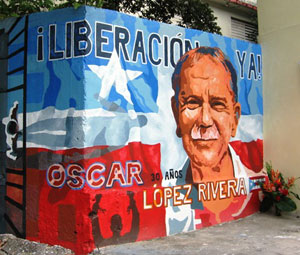 May 29, 2015 marks 32 years of imprisonment for Puerto Rican patriot Oscar Lopez Rivera, who is held as a political prisoner in US jails. During twelve of these 32 years he endured confinement in two control units of a program known as Super Max, located in Marion, Illinois and Florence, Colorado. In 1998 he was transferred to the maximum security prison in Terre Haute, Indiana, where he remains.

Lopez Rivera, now 70 years old, is the Latin American political prisoner who has served the most years in US prisons.

A veteran of the Vietnam War and decorated for valor in combat, Oscar Lopez Rivera was arrested in 1981 because of his struggles in defense of human rights and his affirmation of Puerto Rican national identity. He was sentenced to seventy years in prison.

This Puerto Rican patriot rejected the possibility of obtaining a parole offered during President Bill Clinton’s administration. Clinton pardoned most Puerto Rican prisoners who by then had served nearly 20 years in prison. Lopez Rivera did not accept his parole in solidarity with his fellow comrades Haydee Beltran and Carlos Torres who remained incarcerated at the time and are now out of prison.

Public outrage over the case of López Rivera is beginning to be the source of great protests. The colonialist authorities fear new demonstrations revealing how strongly Puerto Ricans uphold the idea of independence, despite the systematic and violent colonial coercion the US has been applying against that people since the early twentieth century.