Published on 8 June 2015 by www.venezuelanalysis.com

On 8 June, Venezuela was recognized by the United Nations Food and Agriculture Organization (FAO) for meeting the UN millennium goal of halving malnutrition.
The recognition was awarded during the 39th FAO conference in Rome which will last until June 13. It counts among its attendees representatives of 190 countries, including 130 ministers and 12 heads of state.
Attending on behalf of Venezuela, Bolivarian Vice-President Jorge Arreaza highlighted his nation's achievements in eradicating hunger under the socialist governments of Hugo Chavez and Nicolas Maduro.
"Under the Revolution, children are now served breakfast, lunch, and snacks in schools [...] We've seen a miracle in school nutrition, whereas in the past [children were served] only one glass of milk a day," stated the socialist vice-president in reference his country's School Food Program.
According to Arreaza, Venezuela has over the last decade invested $142 billion in food programs that have distributed over 25 million tons of food items to 65% of the population. Today, 95.4% of Venezuelans eat three meals a day.
Venezuela was also recognized for its role in providing technical assistance to other nations striving to similarly meet millennium targets for eradicating hunger.
"Venezuela can be considered one of the countries, like Brazil and China, that has contributed to South-South cooperation in the world," noted Laurent Thomas, FAO Director for Technical Cooperation.
The South American nation was recognized by the FAO first in 2012 for slashing extreme hunger and poverty by 50% and subsequently in 2013 for reducing hunger from almost 14% in 1992 to 5% in 2012.
Arreaza accepted the UN body's recognition on behalf of Venezuelan President Nicolas Maduro, who was compelled to cancel both his appearance at the conference as well as his much-anticipated meeting with the Pope for health reasons.

CELAC-EU Summit rejects blockade of Cuba and its extraterritorial impact

Published on 12 June by Granma 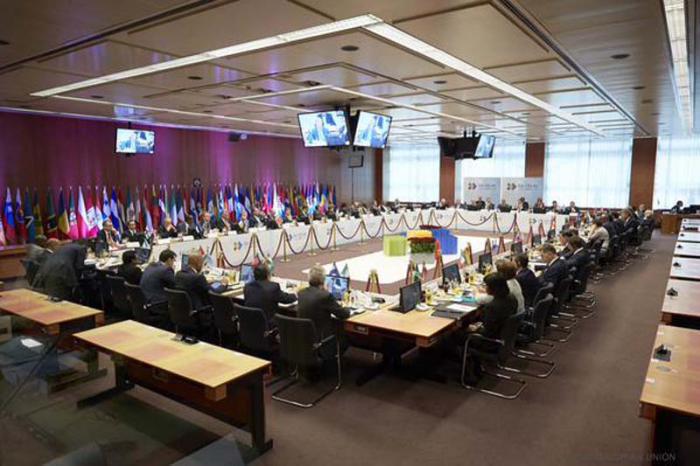 The final declaration of the Summit of the Community of Latin American and Caribbean States (CELAC) and the European Union (EU), which concluded June 11 in Brussels, rejected the U.S. blockade against Cuba and its extraterritorial impact. The 2nd CELAC-EU Summit was held over two days in the Justus Lipsius building, headquarters of the European Council, and saw the participation of more than 40 heads of state and government and high level delegations from 61 countries throughout the two regions.

The document highlighted that laws contained within the Helms-Burton Act cause human damages to the Cuban people and negatively impact the development of economic relations between the island, the EU and other countries. The unilateral coercive measures are a violation of international law, the text added.

The document also acknowledged CELAC’s Special Declaration opposing unilateral measures against Venezuela, adopted January 29, and its statement expressing solidarity with the country, approved on March 26. Likewise, the final declaration of the Summit praised the declaration of Latin America and the Caribbean as a Zone of Peace and the decision to resolve differences through peaceful means.

Furthermore, it welcomed the announcement made on December 17, 2014, by the Presidents of Cuba and the United States, Raúl Castro and Barack Obama, to advance toward re-establishing bilateral relations. The document noted, “In this context we expect all necessary steps to be taken towards an early end to the embargo [blockade].”

Published on 22 May by www.venezuelanalysis.com 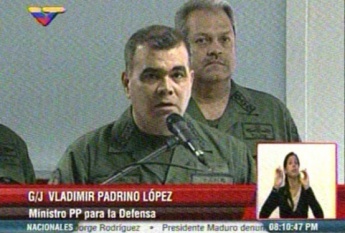 Venezuelan Defence Minister, Padrino Lopez, has denied international press reports that the cocaine filled plane which crashed off the coast of Colombia on Wednesday was originally bound from Venezuela.
At a press conference on Wednesday evening, Lopez stated that the small Hawker HS 800 aircraft had originally taken off from Central America and passed through Venezuela- where it loaded up on its illicit cargo- before being intercepted by the country’s National Anti-Drug Office (ONA).
The version of events appears to be supported by the discovery of a Mexican passport, seemingly belonging to the plane’s pilot, amongst the wreckage of the aircraft.

Published on 13 April 2015 by venezuelanalysis.com 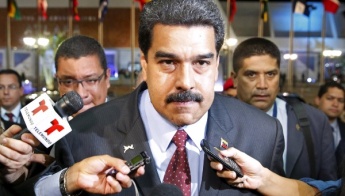 Regional leaders flocked to Panama City this past weekend for the VII Summit of the Americas, which has been widely hailed as a victory for left-leaning and progressive forces in the region, particularly Venezuela and Cuba.

The summit was marked by the historic presence of Cuba whose president Raul Castro addressed his counterparts and held face to face talks with Barack Obama, the first Cuban leader to do so since the socialist nation's US-imposed expulsion from the Organization of American States in 1962.

However, the much anticipated rapprochement between the two nations was largely upstaged by regional leaders' near uniform rejection of President Obama's March 9 Executive Order labeling Venezuela a "national security threat", which has been condemned by all 33 nations of the CELAC  (Community of Latin American and Caribbean States) and other regional bodies.

While positively noting the steps taken by Obama to reestablish bilateral ties with Cuba, Castro nonetheless criticized the US president for his aggressive measures against Venezuela.

"Venezuela is not and could never be a threat to the national security of a superpower like the US," declared the Cuban leader, calling on Obama to "repeal the Executive Order" and "lift unilateral sanctions".

"I must reaffirm all of our loyal and resolute support for the sister Bolivarian Republic of Venezuela, for the legitimate government and civil-military union headed by President Nicolas Maduro."

Colombia extends suspension of air raids on FARC by one month

Published on 10 April 2015 by teleSUR English 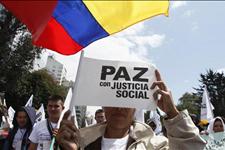 Colombian President Juan Manuel Santos announced Thursday that he would extend the suspending of air raids on camps used by the Revolutionary Armed Forces of Colombia for an additional month. President Santos originally issued the suspension of bombings of FARC camps on March 10, stating at the time that it was a temporary measure to help de-escalate the more than 50-year conflict in the country and help move the peace negotiations forward.

The FARC implemented a unilateral cease-fire in December 2014, which has been independently verified by human rights defenders. Santos added that the Ministry of Defense had also confirmed that the FARC was abiding by the unilateral cease-fire. “For this reason, I have decided to extend the suspension of bombings for one more month, I will continue to do so into the future,” said Santos.

However the decision to suspend bombings does not preclude the Colombian government from engaging in combat on the ground, which the FARC has warned threatens the peace process.

Published on 10 April 2015 by www.venezuelanalysis.com

The Venezuelan Committee for the Victims of the Barricades have branded a decision to deny them entry into a Summit of the America’s Forum as a “premeditated” attempt to silence them.

The victims of last year’s barricades, which were headed by Venezuelan opposition figures Leopoldo Lopez and Maria Corina Machado, had travelled out to Panama earlier this week to participate in the Civil Society and and Social Actors Forum, as well as in the “People’s Summit” - an accompanying event to the Organisation of American States (OAS) 7th “Summit of the Americas”.

“This is no coincidence, they want to silence our voices so that we can’t tell the stories of our family members who are now dead, thanks to who they are calling political heroes like Leopoldo Lopez,” said Yendry Velasquez, whose soldier husband was killed in the violence.

The exclusion of the committee, which was formed last year in a bid to highlight the stories of the 43 people who were killed and the hundreds who were injured in last year’s violence, is just one of many recent attempts to silence the group. They say that they have been discriminated against by the largely privately owned Venezuelan media and its international counterparts, which have prevented them from telling their stories.

“They want to shut us up, they don’t want us to tell the truth,” said Desirée Cabrera, whose infant daughter almost died in an arson attack during the barricades.

As part of its awareness raising work, the committee has submitted official documentation of their experiences to bodies such as the Spanish and U.S. embassies in Venezuela, as well as to a U.N. mission in Caracas. To date, they have received little in the way of a response.

Published on 9 April 2015 by www.venezuelanalysis.com 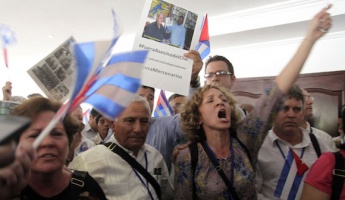 Caracas has joined Havana in withdrawing its delegation to the Civil Society Forum at the 7th Summit of the Americas this week, after Cuban delegates broke the news that at least 20 counter-revolutionary Cuban “mercenaries” had also been invited to participate in the event.

Among the highly controversial figures set to participate in the forum are the radical anti-Cuban government dissidents, Manuel Cuesta Morúa, Elizardo Sánchez and Rosa María Payá, as well as members of the Cuban exile community. All are known to have financial ties to U.S. funding agencies such as the National Endowment for Democracy (NED) and have a history of trying to subvert the Cuban government. Ex-CIA agent, Félix Rodríguez Mendigutía, better known for his role in the assassination of Argentinian revolutionary, Ernesto “Che” Guevara, is also participating in the summit.

Published on 18 March 2015 by Granma Internacional 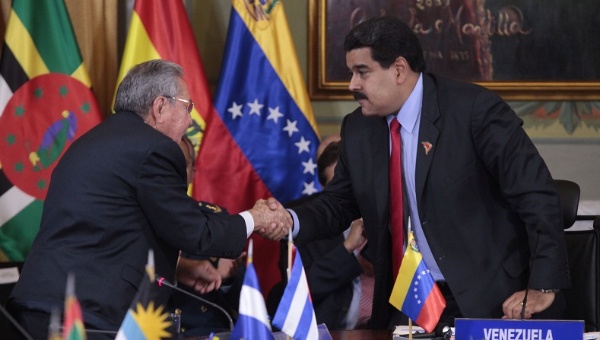 Speech by Army General Raúl Castro Ruz, First Secretary of the Central Committee of the Communist Party of Cuba and President of the Councils of State and Ministers, at the 9th Extraordinary Alba-TCP Summit, convened in solidarity with the sister nation of Venezuela, held in Caracas, the BolivarianRepublic of Venezuela, March 17, 2015

ALBA brings us together today to reaffirm our firmest support for the Bolivarian people and government in the face of the latest interventionist measures and threats from the U.S. government against Venezuela.

Published on 17 March 2015 by TeleSUR English 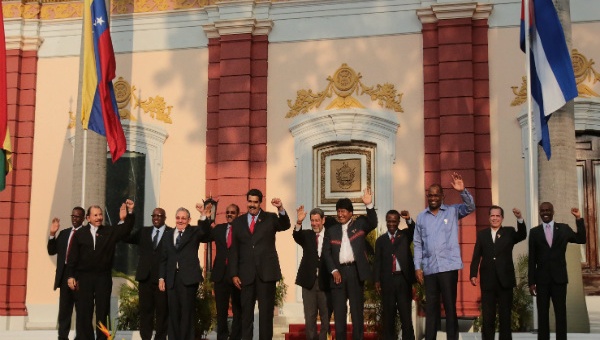 We, the heads of state and government, representatives of the member countries of ALBA, gathered on March 17, 2015 in Caracas, Bolivarian Republic of Venezuela, declare: