Paramilitarism on the rise in Venezuela 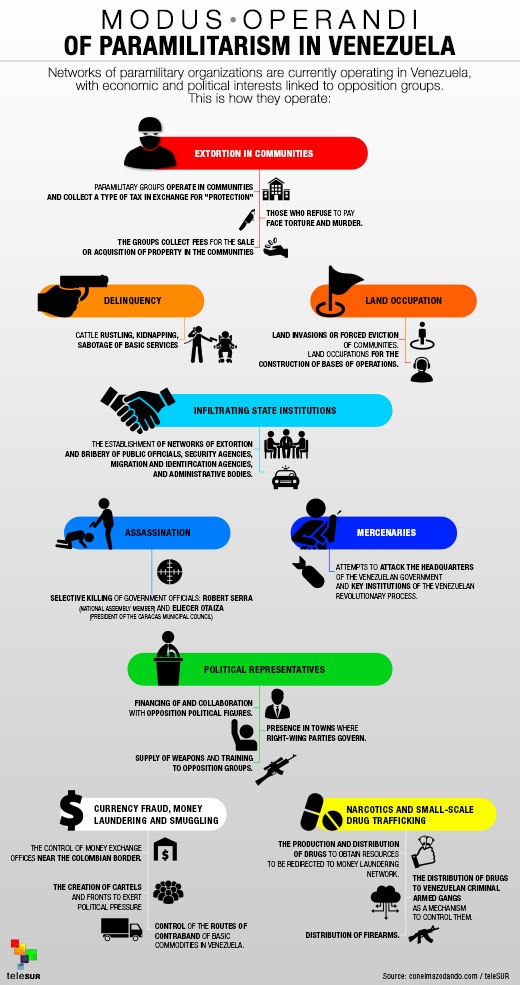 Paramilitary groups have mainly developed in Colombia, but the model was “exported” throughout the region during the Cold War. Today, paramilitary groups operate in Mexico, Honduras, and more recently in Paraguay

Venezuela, however, was relatively free from paramilitary forces – although there have been small guerrilla groups operating inside the country and land distribution issues – until 1997

In Febrary 1997, detained paramilitary groups were connected to wealthy landlords and had detailed maps of the border region of Apure. The men claimed they were hired by the Venezuelan Gen. Enrique Medina Gomez

Carlos Castaño, the leader of Colombia’s most famous paramilitary group, the United Defense Forces of Colombia (AUC), confirmed later that same year that he had met with 140 Venezuelan businesspeople and landlords to create a similar paramilitary structure as the one he led in Colombia, particularly in border regions

However, in 2002, a video emerged showing “Commander Antonio” announcing the birth of the United Self-Defense Forces of Venezuela (AUV), inspired by the Colombian AUC. In the video statement, the commander said his group had declared President Hugo Chavez a military target

By 2003, the AUC launched a series of attacks on Venezuelan territory, with as many as 500 Colombian paramilitaries entering the country

A report released by local human rights groups that year revealed that as many as 120 campesino and indigenous leaders had been killed since 1999. Almost all of them had been government sympathizers, mainly from Zulia state, which shares a border with Colombia

In 2004, Venezuelan authorities discovered a training camp in the outskirts of Caracas at Daktari farm, which belonged to the prominent opposition activist Robert Alonso. A group of 116 Colombian paramilitaries were arrested

He further estimated that around 2,500 Colombian paramilitaries were now inside the country.

In February and March 2010, a wave of political murders of leaders of the governing United Socialist Party of Venezuela, or PSUV, in Tachira state, further confirmed the presence of Colombian paramilitaries as a growing epidemic.

As several news reports confirm, paramilitary camps have since spread through the states of Merida and Baruta. Analysts believe many of the paramilitary members are awaiting orders and keeping a low profile

Venezuela's interior minister, Gustavo Gonzales, revealed in May this year that over 200 campesino and indigenous leaders have been murdered by paramilitary forces

This first period of paramilitary incursion coincided with Alvaro Uribe's presidency in Colombia. Uribe was an outspoken critic of President Chavez and vowed to put an end to his government. Shortly after leaving office, Uribe revealed that he would work as an adviser for the Venezuelan opposition.

Coincidentally, Zulia state, where there is a high paramilitary presence, signed an agreement with the Colombian police force to train its own state police. During Uribe's presidency, the Colombian military also sent 100 undercover agents to Zulia

Experts, politicians and even former paramilitary leaders have repeatedly singled out Uribe as a key figure in the creation of the infamous United Self-Defense Forces of Colombia and of paramilitary forces in general, especially during his term as governor of the Colombian state of Antioquia

Rafael Garcia, who was head of the information department Colombia’s DAS intelligence agency under Uribe, revealed that the AUC and other paramilitary groups had infiltrated the agency and were using classified information to target Uribe's opponents throughout the country.

He also corroborated reports that there were coordinated efforts with the AUC to oust and/or kill Venezuelan President Hugo Chavez.

Some poor neighborhoods within Caracas have experienced unexplainable peaks of violence, with many residents comparing the sporadic rise to situations experienced in neighboring Colombia.

The detention of the young opposition activist Lorent Saleh, who admitted to meeting with Uribe and his allies within Colombia, also confessed to being trained in armed struggle and making an effort to create paramilitary groups within Venezuela, confirming the political nature of paramilitary operations in the country.

Furthermore, the murder of PSUV lawmaker Robert Serra also made visible old links between Colombian paramilitaries and the right-wing opposition.

In 2014 alone – the same year that Serra was killed – another three government officials were murdered.