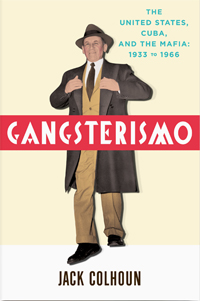 Jack Colhoun is a journalist and archive researcher with a distinguished record of investigating US foreign policy in Vietnam, Cambodia and the Middle East and publicising the impact of special interest lobbies on domestic politics like the Obama Healthcare legislation. He was the leader of the draft and military resistance registers exiled in Canada during the Vietnam War.

The author laboured for nineteen years over source material, primarily the US intelligence documents on Cuba from the John F. Kennedy Assassination Collection (JFKAC) at National Archives II in Maryland. This archive collection was created by the President Kennedy Act of 1992, which mandated the declassification of documents with possible relevance to Kennedy’s assassination in November 1963.i The declassified documents offer new insights into US policy making: from Eisenhower’s decision to seek the overthrow of the Cuban revolution in November 1959; to the CIA’s failed Bay of Pigs invasion in April 1961; to Kennedy’s provocative Operation Mongoose in 1962; to the Cuban missile crisis of October 1962; to Kennedy’s covert funding of ‘autonomous’ Cuban exile commando operations in 1963; to back-channel discussions between the Kennedy Administration and Castro in the weeks before President Kennedy’s assassination in November 1963; and President Lyndon Johnson’s de-escalation of US policy in Cuba .

The State Department and the U.S. Agency for International Development plan to spend $20 million to promote democracy in Cuba. Below is a breakdown of the budget: 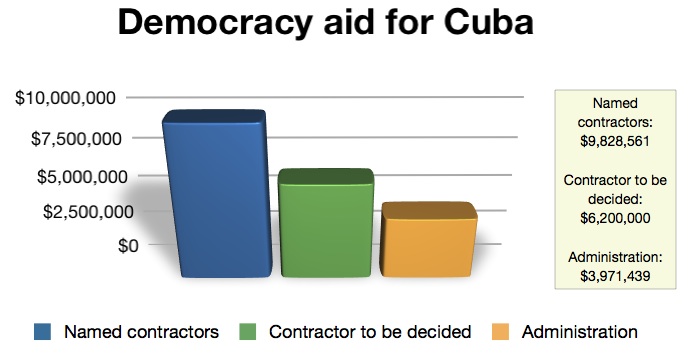 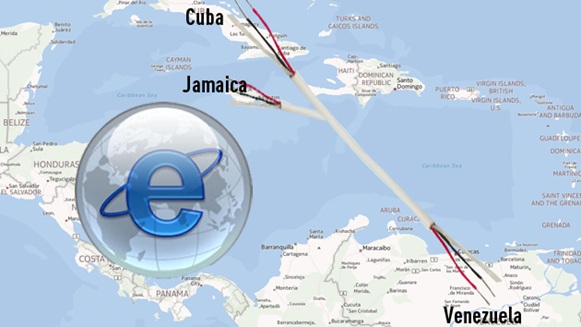 Cuba will expand public internet services during June in some 118 cyber centers operating throughout the country, according to a resolution issued by the island’s Communications Ministry.

The Internet services will be offered in all commercial offices of the Cuban Telecommunications Company ETECSA, which count on Internet rooms. With this aim a total of 118 facilities were set up on the island, particularly in main cities, while other similar facilities will progressively be opened.

First published 8 May 2013 by Jorge Martin

You couldn’t have made it up. A family of Cuban “dissidents” brought to Spain by the Spanish government over two years ago found themselves evicted from their home in Alicante by the police because they couldn’t afford to pay the rent. Now they say they want to go back to Cuba!

Gilberto Martínez, 50, and his family, arrived in Spain in 2011, as part of a group of a few hundred Cuban “dissidents” in an agreement between the Spanish Socialist Party government, the Cuban government and the Catholic Church. As part of the deal these so-called political exiles were entitled to receive benefits and financial help and they were also given accommodation.

Ironically, with the arrival of the right-wing Popular Party government in November 2011, some of the benefits they were receiving were abolished as part of the austerity cuts. Now, these opponents of the Cuban revolution found themselves in the middle of an acute capitalist crisis in which millions of workers have lost their jobs and as a consequence hundreds of thousands of families have been evicted from their homes. 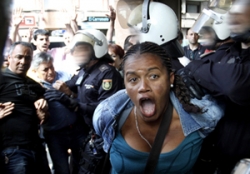 In July last year they stopped paying their rent of 400 euro a month and then from September they could no longer afford to pay for electricity or water. After the end of the special government subsidies, the exiles had had to rely on charity aid from the Red Cross and Caritas, but even that had dried up.

On May 7, the police arrived at their flat with the intention of enforcing an eviction order for non-payment of rent. Evictions and repossessions of homes have reached epidemic proportions in Spain as a result of the capitalist crisis. In dozens of cities and towns across the country people have organised anti-eviction campaigns (Plataformas de Afectados por las Hipotecas, StopDesahucios) and are using all means at their disposal to highlight the issue and resist evictions and repossessions.

A group of 80 activists had gathered outside the flat to try to prevent the Cuban family from being thrown out. There have been many small victories of the anti-evictions movement. This was not to be one of them, however. Two people were arrested, four were injured and a family of five found themselves out on the streets without a roof over their heads. This was the balance-sheet of a day in the life of capitalist democracy enforced by the armed bodies of men in defence of private property. Ah, but the democratic right of the owner of the flat to make a profit on it was dutifully protected. 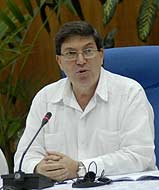 Statement by H.E. Bruno Rodríguez Parrilla, Minister for Foreign Affairs of the Republic of Cuba, during the presentation of the National Report to the Universal Periodic Review performed by the Human Rights Council. Geneva, May 1st, 2013

Cuba is honored to present its second National Report to the Universal Periodic Review Mechanism (UPR) performed by the Human Rights Council. It does so feeling proud of its humane work and its performance to ensure the enjoyment of all human rights by all its citizens.

The economic, political and media blockade imposed by the United States which Cuba has resisted undefeated for more than fifty years, is a mass, flagrant and systematic violation of human rights which causes damages, scarcities and hardships, but has not managed to hinder the provision of equal opportunities, the equitable distribution of wealth or the realization of social justice.

The relentless attempts by the United States to impose a “change of regime” on the Cuban people is a serious violation of its right to self-determination, which has failed to prevent the active, democratic and direct participation of its citizens in the construction of its constitutional order, the decisions adopted by its government or the election of its authorities.

This exercise is being held on the International Workers’ Day, which is being joyfully celebrated in Cuba by millions of compatriots and hundreds of friends from all over the world in all streets and squares. They do so as free men and women, in the defense of the rights they have achieved. They are not masses of people who are rightfully outraged, or workers who have lost their jobs, or students besieged by high costs or debts, or immigrants persecuted for reasons of selfishness, racism or xenophobia. May our solidarity go to all those who are struggling, anywhere in this planet, for human rights for all, for peace and development, for the survival of the human species, which is being threatened by colossal arsenals and climate change.

René González has been given permission to remain in Cuba! 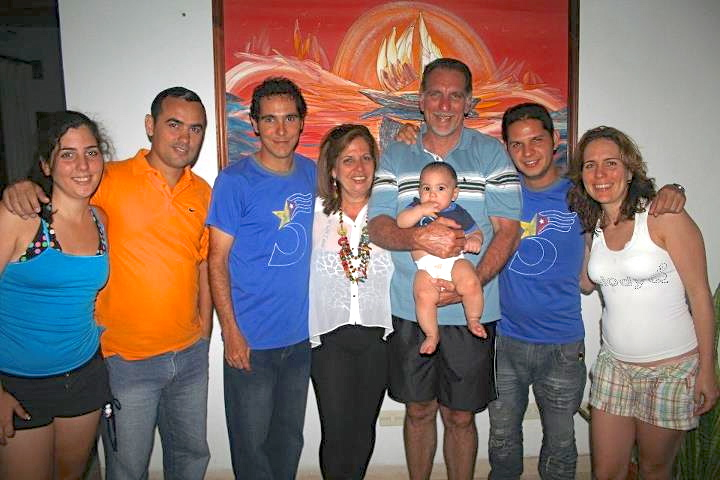 In a huge development in the case of the Cuban Five, the court has finally granted a motion, first made last June, to allow René González to serve the remaining portion of his three-year parole in Cuba, after which he will of course be able to remain in Cuba, outside the jurisdiction of the court. Until this time, the court has required him to spend that parole at an undisclosed location in Florida, requiring him to remain in virtual seclusion because of the danger to his life from the very terrorists whose plots he and the other members of the Five came to the U.S. to expose.

René has been in Cuba for two weeks to attend a memorial service for his father Cándido, who died recently.

Phil Horowitz, Rene's attorney, said: "Rene and I are happy that he will be able to be permanently reunited with his family. Rene's exemplary conduct shows that these are not individuals that the government has made them out to be. We are just so happy and will take all the steps pursuant to the court order."

The 7-page court order by Judge Joan Lenard (click to download), describes the requirements for his right to remain in Cuba. The principal requirement is that he renounce his citizenship, which he willingly offered to do previously (René held dual U.S.-Cuban citizenship). To renounce a U.S. citizenship, it must be done outside of the United States, as per U.S. federal code, Section 1481 a(5).

We are extremely happy for René, who has, along with his Cuban Five brothers, been unduly punished for being a proud defender of his people, his homeland and the Cuban Revolution.

This development must give all the Cuban Five supporters great inspiration to continue the fight so that Gerardo, Ramón, Antonio and Fernando can return home immediately 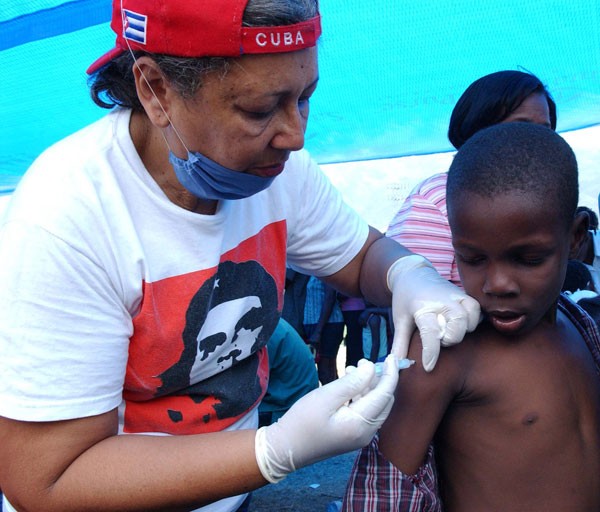 Cuba has become a world-class medical powerhouse with very limited resources, while “the US squanders perhaps 10 to 20 times what is needed for a good, affordable medical system.” As a result, the Cuban infant mortality rate is “below that of the US and less than half that of US Blacks,” and Americans can hardly claim to have a health care system.

Furious though it may be, the current debate over health care in the US is largely irrelevant to charting a path for poor countries of Africa, Latin America, Asia and the Pacific Islands. That is because the US squanders perhaps 10 to 20 times what is needed for a good, affordable medical system. The waste is far more than 30% overhead by private insurance companies. It includes an enormous amount of over-treatment, making the poor sicker by refusing them treatment, creation of illnesses, exposure to contagion through over-hospitalization, and disease-focused instead of prevention-focused research.

Poor countries simply cannot afford such a health system. Well over 100 countries are looking to the example of Cuba, which has the same 78-year life expectancy of the US while spending 4% per person annually of what the US does.

Cuban Women in Parliament: Beyond the figures

We wake up in the morning and the media tells us about the world. Among the deluge of headlines in recent days one figure stands out which defies simple mathematical analysis: 48.86% of deputies to the Cuban National Assembly are women. This is an event which cannot be overlooked by the National Secretariat of the Federation of Cuban Women (FMC) and one we wish to share with our people.

The 299 recently elected deputies did not reach their seats as the result of a quota policy, a strategy utilized in various countries of the world to promote gender equality. They are in the Assembly on the basis of their own merit and popular recognition of that merit. They are a reflection of the development achieved in all spheres of the country’s economic, political and social life set in motion by the Revolution within the Revolution, or the process for equality of rights, possibilities and opportunities between women and men.

An analysis of the 2012 World Map of Women in Politics allows us to appreciate the relevance of this fact beyond our borders: the average of women parliamentarians at the global level is below 20%. Thus, the 48.86% places us as one of the countries of the world with the highest female representation in Parliament.

Film review: MAESTRA: The march of the pencils

By Jane Franklin  www.janefranklin.info
“Maestra” is a celebration of the joy of teaching and learning despite all obstacles. The triumph of the Cuban Revolution in January 1959 opened the way for putting into practice the Revolution’s goals, the reasons for having a revolution in the first place. One aim was to educate everybody, including all those people who never before had a chance to read or even to write their names.
After two years of revolutionary practice, Cubans were ready to take education to everybody who had been left out by colonialism and dictatorship. On January 1, 1961, Cuba launched its National Literacy Campaign, which became a historical success and a model for other nations. What a revolution it was! About a million people mobilized to eliminate illiteracy in one year: more than 250,000 literacy workers and 707,000 adults who learned to read and write. More than 100,000 of these teachers were not yet 18 years old, and they are the center of this exciting documentary, directed and produced by Catherine Murphy.