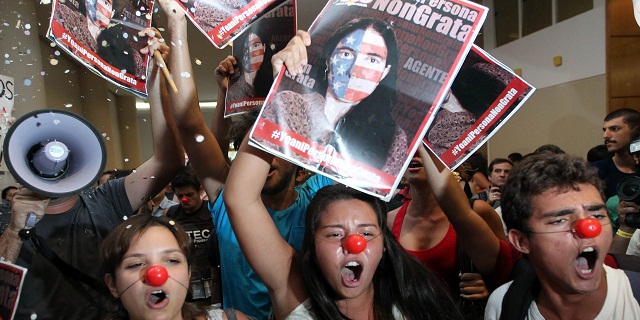 In 2002, despite already being married to a Cuban man, Yoani Sanchez married a German citizen and emigrated to wealthy Switzerland. Citing ‘economic difficulties’ in Switzerland as her motive, Sanchez returned to Cuba just two years later; a place she called ‘an immense ideological prison’, where ‘shadowy figures feed off our human joy, terrorising us with violence, threats and blackmail’. Her blog Generation Y began in 2007. The following year, Sanchez won numerous international journalism and ‘human rights’ awards, despite being unknown and with no track record, ‘from countries that have actively pursued polices of usurping Cuban sovereignty’ (Willis and Alfonso, ‘The Curious Case of Yoani Sanchez’,Counterpunch, 20 March 2013). These prizes earned her over $320,000, equivalent to 1,488 years of the minimum salary in Cuba. Sanchez also receives a monthly salary of $10,000, paid by SIP IAPA (a group of Latin American big media corporations) and the Spanish daily El Pais. In 2008 Time magazine listed Sanchez among its top 100 most influential people.

Sanchez cites denial of access to the internet as among the violations of human rights in Cuba. She blames the Cuban government, not the US government whose blockade prohibits Cuba connecting to 30 optic fibre cables which circle the island. Yet Sanchez blogs daily. Her blog accepts Paypal, displays a copyright notice and registers a domain through a US company – ‘freedoms’ prohibited to most Cubans by the US blockade. Sanchez frequently uses the US and other embassies to access the internet. Her blog is available in 18 languages: ‘No other website in the world – not even the sites of important international agencies, such as the UN, the World Bank, the IMF…offer this degree of linguistic support…Who finances the translations?’ asks Salim Lamrani, a lecturer in Paris and specialist on Cuba-US relations. Even more fantastic, Sanchez has 400,000 followers on Twitter (just 100 of them in Cuba) and follows 80,000 Twitter users. She claims to tweet via SMS connection without internet access. Her 400 messages a month in 2011, costing $1.25 each, cost Sanchez $7,000 in one year of tweeting alone. Followerwonk.com reveals that 50,000 of Sanchez’s followers are ‘ghost accounts’. ‘Who financed the creation of fictitious Twitter accounts?’, Lamrani asks.

Prolific she may be, but Sanchez does not blog about her regular meetings with US and European diplomats in Havana. Wikileaks revealed that Sanchez met secretly with US Assistant Secretary of State Bisa Williams in Havana in September 2010 and that former head of the US Interest Section in Havana, Michael Parmly, stated ‘I would be very distressed if the many conversations I have had with Yoani Sanchez were disclosed. She could suffer the consequences her entire life.’

On tour in 2013, Sanchez’s first stop was Brazil, where she was greeted at the airport and in the auditorium by protesters accusing her of being a CIA agent. Her visit was financed by the US embassy, sections of the Brazilian right and major media corporations. Next, in the Czech Republic, Sanchez met up with Eliecer Avila. This part of the tour was financed by People in Need, an organisation created and financed by the National Endowment for Democracy (NED), a front for the CIA, which is funded largely by the US Congress under the budget for USAID. Between 2006 and 2011, People in Need received over $675,000 from NED to disseminate material and organise events against Cuba. To avoid the protests that occurred in Brazil and threaten to undermine the circus, the university meeting in Prague was a closed event. Nonetheless, supporters of the Cuban Revolution were among the 50 participants and challenged Sanchez and Avila.

Protests followed Sanchez to Spain, where the meeting she addressed was almost empty and so many thousands of people tweeted critical questions that her links to the CIA became a ‘trending topic’. In Mexico, she was met by protesters on arrival at the meeting with SIP IAPA, who pay her $6,000 a month. Whilst appealing to the Mexican government to push Cuba on the question of human rights violations, she refused to meet the families of murdered Mexican journalists.

In New York in mid-March Sanchez was met by protests in the public meetings she addressed. In the New School, fed-up with the filtering of pre-written audience questions, protesters chanted, threw US dollar bills printed with Sanchez’s face on them and held up placards which were ripped up before protesters were physically removed. About her security on return to Cuba, Sanchez said ‘I'm sure the defamation, the firing squad, surveillance, control over my phone line, the oppression on my family will increase, but it was worth it.’ Ironically, the safest place for Sanchez is clearly in Cuba where she is paid little attention and attracts no protests.

In Mexico Sanchez had complained that: ‘Any opponent was dismissed as a US agent, a mercenary recruited by the CIA or the Pentagon’. In Washington, she demonstrated just how close she is to the imperialists. Sanchez visited the US Congress to a ‘rock star reception…worthy of a foreign dignity’ (Miami Herald, 19 March). She was received by TV cameras, and Cuban-Americans, Democrat Joe Garcia and Republicans Ileana Ros-Lehtinen and Mario Diaz-Balart, both arch-imperialists and supporters of terrorism who advocate tightening the illegal US blockade of Cuba. Earlier in her trip, Sanchez said the US blockade of Cuba should be ended; it served as an excuse by the Cuban government for its failings. Once in front of US lawmakers, however, she did not make this demand, but instead requested an increased US commitment to regime change: ‘we need you to rebuild our country’ she said. She said nothing about the one place in Cuba where human rights violations, including torture, are systematic – Guantanamo Naval Base, territory illegally occupied by the United States since 1903, where over 100 detainees are currently on hunger-strike. The Miami Herald reported that on 20 March Sanchez would meet with Cuban-American Senator Marco Rubio and members of the US government State Department. Appropriately, on April Fool’s Day she will take her diatribe against Cuban socialism to Miami’s Freedom Tower, the place where the Cuban bourgeoisie who fled into exile from revolutionary Cuba in the 1960s were received. The Sanchez circus will continue until late May.

Between 1 October 1995 and 30 September 2011, the US Congress allocated $205 million for programmes to overthrow the Cuban Revolution. In recent years these have been focussed on ‘information technology, particularly on supporting independent bloggers and developing social networking platforms on the island’ (US Government Accountability Office report ‘Cuba Assistance Democracy’, 25 January 2013). Yoani Sanchez is a beneficiary of this policy and she must be exposed as such.

* Thanks to Salim Lamrani from whose ‘40 questions for Yoani Sanchez’ this borrows heavily. See www.ratb.org.uk/news/cuba/298-40-questions-yoani-sanchez