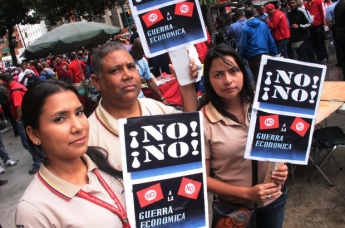 “This is about telling the pro-coup sectors of Fedecamaras, Venacham, the Polar Group [Venezuela’s largest private food producer] and the bankers that their time has come,” said Braulio Alvarez, a legislator of the government’s United Socialist Party of Venezuela (PSUV), who attended the demonstration.

Although the economy has continued to gradually grow this year and unemployment has remained relatively low, since January the country has experienced shortages in some basic foodstuffs such as milk and corn flour while annual inflation has spiked to 49.4%, the highest in recent years.

Further, on the black market the dollar is currently worth up to nine times the official value set by the government (6.3 bolivars = US $1), creating imbalances for importation and price-setting.

The Venezuelan government argues that these problems are due to an “economic war” being waged against it by business sectors aligned with the conservative opposition. Officials affirm that these sectors attack the bolivar currency, lower production, hoard products and speculate on prices in order to provoke scarcity, inflation, and political discontent.

Meanwhile the opposition claims that the economic situation is due to “government mismanagement”, arguing that state interventionist policies such as currency and price controls have damaged local production and affected imports.

Workers at Thursday’s march supported the government’s stance on the situation and accused business groups of purposefully destabilising the economy.

“We demand that Fedecamaras cease the economic war, speculation, and reduction of supply…the people are organised, [late president Hugo] Chavez awoke us to never again go to sleep or kneel before anyone,” declared Frank Quijada, president of the national union of Polar Group workers.

Since Maduro’s election in April the government has adopted a range of measures to combat shortages and inflation, such as boosting imports, stimulating agricultural production, raising some price controls, and setting up an Economic Commission to monitor private and state-owned companies’ production and supply chains.

The government has also set up an information line for citizens to denounce any incidents of “economic sabotage” in companies, suppliers or retailers.

“We workers say today to the world, to Fedecamaras, Venacham and all those businesspersons that are destabilising the nation, that we workers have become worker-inspectors, we’re training ourselves to accompany the government of President Nicolas Maduro in this struggle,” said Marco Antonio Diaz, vice president of the Bolivarian Central, to state media.

According to a recent survey by polling firm the Venezuelan Institute of Data Analysis (IVAD), opinion over the responsibility for shortages in the country appears to coincide with political affiliation.

In the poll, 75% of “Chavistas” agreed with the statement that economic sabotage is responsible for producing shortages, while 44% of independents and only 18% of pro-opposition respondents felt the same way.

Thursday’s march was one of several planned by the pro-government union movement around the country this month in protest of the “economic war”.