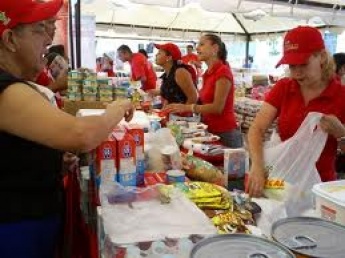 Not likely. In the opposition's analysis Venezuela is caught in an inflation-devaluation spiral, where rising prices domestically undermine confidence in the economy and currency, causing capital flight and driving up the black market price of the dollar. This adds to inflation, as does – in their theory – money creation by the government. And its price controls, nationalisations and other interventions have caused more structural problems. Hyperinflation, rising foreign debt and a balance-of-payments crisis will mark the end of this economic experiment.

But how can a government with more than $90bn in oil revenue end up with a balance-of-payments crisis? Well, the answer is: it can't, and won't. In 2012 Venezuela had $93.6bn in oil revenues, and total imports in the economy were $59.3bn. The current account was in surplus to the tune of $11bn, or 2.9% of GDP. Interest payments on the public foreign debt, the most important measure of public indebtedness, were just $3.7bn. This government is not going to run out of dollars. The Bank of America's analysis of Venezuela last month recognised this, and decided as a result that Venezuelan government bonds were a good buy.

The central bank currently holds $21.7bn in reserves, and opposition economists estimate that there is another $15bn held by other government agencies, for a total of $36.7bn. Normally, reserves that can cover three months of imports are considered sufficient; Venezuela has enough to cover at least eight months, and possibly more. And it has the capacity to borrow more internationally.

One problem is that most of the central bank's reserves are in gold. But gold can be sold, even if it is much less liquid than assets such as US treasury securities. It seems far-fetched that the government would suffer through a balance-of-payments crisis rather than sell its gold.

Hyperinflation is also a very remote possibility. For the first two years of the economic recovery that began in June 2010, inflation was falling even as economic growth accelerated to 5.7% for 2012. In the first quarter of 2012, it reached a monthly low of just 2.9%. This shows that the Venezuelan economy – despite its problems – is very capable of providing healthy growth even while bringing down inflation.

What really drove inflation up, beginning a year ago, was a cut in the supply of dollars to the foreign exchange market. These were reduced by half in October of 2012 and practically eliminated in February. This meant more importers had to purchase increasingly expensive dollars on the black market. This is where the burst of inflation came from.

Inflation peaked at a monthly rate of 6.2% in May, then fell steadily to 3% in August as the government began to provide more dollars to the market. It jumped to 4.4% monthly in September, but the government has since increased its auctions of dollars and announced a planned increase of food and other imports, which is likely to put some downward pressure on prices.

Of course Venezuela is facing serious economic problems. But they are not the kind suffered by Greece or Spain, trapped in an arrangement in which macroeconomic policy is determined by people who have objectives that conflict with the country's economic recovery. Venezuela has sufficient reserves and foreign exchange earnings to do whatever it wants, including driving down the black market value of the dollar and eliminating most shortages. These are problems that can be resolved relatively quickly with policy changes. Venezuela – like most economies in the world – also has long-term structural problems such as overdependence on oil, inadequate infrastructure, and limited administrative capacity. But these are not the cause of its current predicament.

Meanwhile, the poverty rate dropped by 20% in Venezuela last year – almost certainly the largest decline in poverty in the Americas for 2012, and one of the largest – if not the largest – in the world. The numbers are available on the website of the World Bank, but almost no journalists have made the arduous journey through cyberspace to find and report them. Ask them why they missed it.