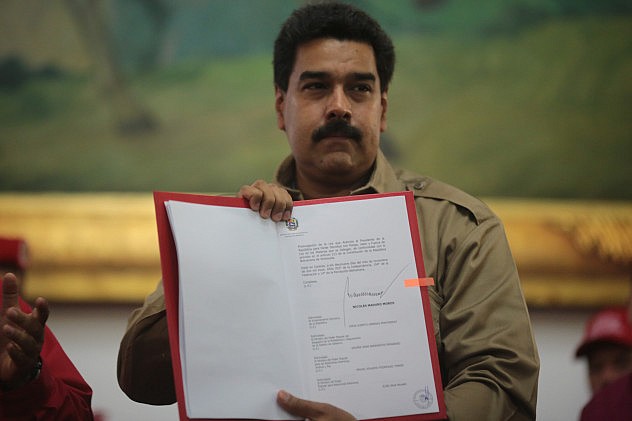 Price controls are already in place for many basic food and household goods to protect incomes from the effects of inflation.

“This law has one central objective: to protect the freedoms and economic rights of working people…we’ve been working to create a single law that brings together all existing laws on economic matters,” said Maduro while announcing the law.

As such, he said the law will be used to “order the national economy”, while also giving legal cover to the planned policy to regulate profit limits to a maximum of 30%.

The profit control measure seeks to combat the abuse of Venezuela’s state-controlled currency exchange system, under which companies are awarded with cheap dollars for imports. Many of these companies were recently found to be subsequently selling products for “grotesque” prices of over 1000% higher than the import cost.

The issue is important for the Venezuelan economy, where oil sales account for 95% of foreign earnings and consumption of many products is dependent on imports.

President Maduro said another aim of the new law is to protect small and medium businesses, which are often caught in the middle of being “victims and perpetrators” of speculation and overpricing. New policies to support such businesses will include guaranteeing lower supply costs and reducing rents for trading space in shopping centres.

These policies respond to the difficult economic situation Venezuela has experienced this year, with annual inflation in October at 54%, shortages in some food and household products, and a near tenfold gap between the value of the official and black market dollar, creating pricing distortions.

The government says this situation is due an “economic war” being waged by business sectors aligned with the conservative opposition, while the opposition argues that “government mismanagement” and interventionist regulatory policies are to blame.

The second law passed by Maduro yesterday was the creation of the National Centre of Foreign Trade and the Foreign Trade Corporation, which “have the objective of ordering all…activity in terms of imports and exports”.

Part of the remit of these new bodies is to “reorder” the mechanisms used to allocate foreign currency to citizens and businesses. The National Centre of Foreign Trade will be responsible for the state’s currency exchange body, Cadivi.

Currency controls have been in place since 2003 to prevent capital flight.

Part of the “reordering” of foreign currency exchange includes the creation of a new register of small and medium businesses. Any business found to have abused previous dollar grants will be excluded from the list, and thus from being able to access state-granted foreign currency.

Maduro said that the economic measures were necessary after inspections of 1,400 businesses in the last two weeks found that only five have their operations and costs “in order”.

“This is worrying, it means that we’re constructing a socialist state with neoliberal capitalism behind that has a lot of power, with which they [opposition forces] aspire to destroy the bases of the Bolivarian Republic of Venezuela,” said the Venezuelan president.

Venezuela will also import over 1.4 million electronic and domestic appliances in the coming weeks and months to ensure supply following the enforced sale of overpriced electronics items recently. A series of measures are also to be passed to boost national productions and exports.

“I have faith that due to the work that we’re going to do in the medium term, maybe in two years Venezuela will increase exports and income from sources other than oil,” Maduro announced.

Critics fear that increased regulation of prices and profits may cause more damage than good to economic activity. Lawyer Juan Manuel Raffali voiced such concerns at a recent forum of the Caracas Chamber of Commerce.

“Price controls failed. They [the government] couldn’t cover the whole economy and now they’re trying to limit profits,” he argued.

“The success of the strategy will reside in the capacity to periodically adjust [profit limits], but there’s fear that what happened [with price controls] will be repeated, because two years have passed without [price] increases in any [controlled] items,” the lawyer continued.

Controlled prices have been increased on some, but not all, consumer goods over the last two years. In April, the regulated prices of chicken, beef, milk and cheese were all increased by 20%.

On Wednesday the U.S. State Department said it was “concerned” about the granting of limited law-making powers to Maduro by the National Assembly.

"We believe the separation of powers and the presence of independent branches of government are essential elements of democracy," spokesperson Jen Psaki stated.

The Venezuela foreign ministry responded yesterday by expressing the Venezuelan government’s “most profound, categorical and energetic rejection” of the comments.

“These declarations are a new demonstration of the intervention of the United States in the internal affairs of our country,” read the statement, which also accused the Venezuela opposition of following the U.S. State Department’s “agenda”.

The foreign ministry statement said the U.S. comments further showed “ignorance of the reality of our country and its judicial system, especially our constitution”.

It concluded that Venezuela’s institutions “are sovereign, independent and free to act according to constitutional principles in order to protect Venezuelans”.