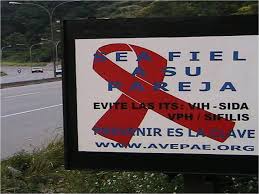 According to former health minister, Isabel Iturria, Venezuela is one of the few countries where HIV and AIDs medicine is guaranteed, due to the high cost of the medicine. One other country which provides the medicine for free is Brazil.

Iturria said that globally the medicine for HIV and AIDS is backed by patents that “generate extraordinary costs for specific products, because they are registered as luxury items.”

Experts from the health ministry also provide people with HIV and their family or friends with workshops, in order, the ministry says, to “help them understand the diagnosis and treatment and to develop prevention mechanisms”. In 2011 the government spent Bs 420 million per month on anti-retroviral medicine which was given to patients.

In order to have access to the medicine, patients provide identification and personal details to the health ministry, which then provides the information to the National AIDS Program. The program tabulates the necessary information then destroys the documents so that patient confidentiality is guaranteed. If the patient is in hospital, an authorised friend or family member can, with the medical report and a letter signed by the patient, obtain the medicine.

The program also works with the Negra Hipolita mission, in order to provide HIV information, diagnosis, and support to homeless people.

Scientists in the Venezuelan Scientific Investigations Institute (IVIC) are currently conducting research to establish the “molecular panorama” of HIV in Venezuela. A statement from the IVIC explained that the work aims to quantify the variants and genotypes that exist in the country in order to “facilitate diagnosis and treatment”.

With the information, doctors could “optimise” their monitoring of the patient “and in a certain way, control the development of both illnesses, as well as documenting the introduction of virus... in indigenous communities such as the Warao in Delta Amacuro state”.

“In Venezuela, the behaviour of the HIV virus is distinct, because other countries have more cases of Hepatitis C associated with HIV, owing to the use of intravenous drugs. However here there is higher co-infection with Hepatitis B,” said Flor Pujol, head of Molecular Virology in the IVIC.

According to Unicef, over 2.1 million people are living with HIV or AIDS in Latin America and the Caribbean.