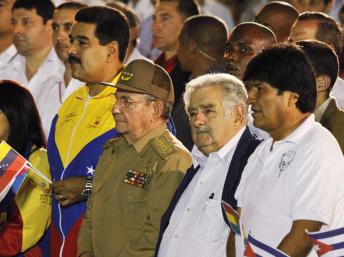 The Venezuelan president called on CELAC members to continue on the “path of unity, freedom and prosperity as Simon Bolivar dreamed”.

Other leftist leaders joined Maduro in calling for the Falklands/Malvinas to be handed over to Argentina and slamming the US on issues ranging from espionage to the ongoing embargo on the host country, Cuba.

“The only way to resist and get rid of the empire of capitalism is integration,” Ecuadorian President Rafael Correa told the summit.

“We have to make Latin America and the Caribbean a space of free men and women,” he stated.

Cuban President Raul Castro also called on the US to end its embargo of his country, and to close the military base at Guantanamo Bay.

The summit reissued a declaration of a “zone of peace” in Latin America and the Caribbean, and called for the peaceful resolution of international disputes and respect for the Charter of the United Nations.

“Latin America can join together based on its cultural, political, ideological...diversity,” Maduro stated on the second day of the summit.

During the event Maduro also signed a series of bilateral agreements with neighbouring countries, which he told press would “ensure the supply of capital, goods, services [and] food for our people”.

The Venezuelan head of state also inked a new energy trade agreement with Saint Lucia's prime minister Kenny Anthony under the Petrocaribe initiative. The head of another island nation, Grenada's Keith Mitchell, submitted a request for membership of the Bolivarian Alliance for the Peoples of Our America (ALBA) to Maduro.

Maduro also met with the presidents of Argentina, Uruguay and Cuba.

Tributes were also paid to Maduro's predecessor Hugo Chavez during the event. The summit opened with one minute of silence for Chavez, who was a key advocate of CELAC's creation.

“We deeply regret the physical absence of one of the great leaders of our America, the unforgettable Venezuelan President Hugo Chavez, an ardent and tireless promoter and fighter for independence, cooperation, solidarity and integration, Latin American and Caribbean unity and the very creation of this community,” Castro stated.

A museum dedicated to Chavez in the east of Havana was inaugurated during the conference. Opened during a ceremony on Wednesday, the museum's exhibit focuses on Chavez's life from childhood to his death last year.

CELAC member states also used the summit to hold talks on regional issues that have historically been discussed through the OAS; such as security and human rights.

Outgoing Chilean President Sebastian Piñera and his Peruvian counterpart Ollanta Humala used the conference to publicly issue a joint statement to end a long-running maritime border dispute. Earlier this week The Hague redrew the border, handing Peru a larger piece of the Pacific Ocean, though Chile held on to coastal fishing grounds.

“We are sure that by sharing experiences between the nations of Latin America and the Caribbean, we will be able to enrich public policy in every one of our nations,” Pinera stated.

President Danilo Medina of the Dominican Republic used his address to respond to criticism of a recent court ruling that critics say could strip thousands of Dominicans of Haitian descent of citizenship.

Attending the summit as an observer, UN Secretary-General Ban Ki-Moon backed calls for the strengthening of respect for human rights in the region. Ban also praised Cuba for its medical programs, progress in countering violence against women and girls, and cultural preservation efforts. However, the secretary-general also criticised “cases of arbitrary detention occurring in Cuba”.

Cuban dissident websites have claimed that authorities detained activists planning to hold a protest during the summit in Havana.

Ban stated that he hoped the country would continue “to work closely with the international community to further strengthen human rights”.

This year's summit ended with Cuba passing the rotating CELAC presidency to Costa Rica. President of Costa Rica Laura Chinchilla stated her country's presidency of the organisation will prioritise “respect for human rights and rule of law in their national and international dimensions as a basis for harmonious coexistence”. However, Chinchilla herself won’t be in office when the next CELAC summit takes place. Costa Rica is set to hold general elections on 2 February, and Chinchilla is unable to run for a second term.

“I turn over the responsibility of chairing CELAC in 2015 to...Ecuador,” Maduro stated.

CELAC's last annual summit was held in Santiago, Chile in January 2013. The organisation also held a ministerial summit last July to discuss strategies to tackle poverty and improve education and healthcare in the region. Representatives from the United Nations Organisation for Food and Agriculture (FAO) and the Economic Commission for Latin America and the Caribbean (ECLAC) also attended the July meeting.