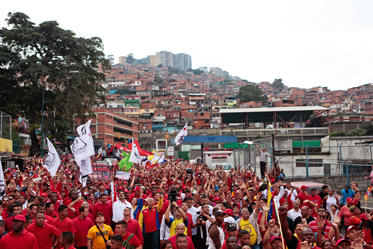 On 10 January, with Venezuelan President Hugo Chavez still recovering in Cuba from post-operative complications following surgery for cancer and unable to attend his inauguration ceremony, tens of thousands of Venezuelans took to the streets in his place. With their symbolic tri-colour presidential sashes and rallying cries of ‘Yo soy Chavez!’ – ‘I am Chavez!’ and ‘Chavez is the people’, the vast crowd was proof once again that the power of the Bolivarian Revolution lies not in the hands of a single revolutionary but in the vast mass of that same Venezuelan working class which swept Chavez to a fourth presidential term in the elections of October 2012. SAM MCGILL reports.

Leaders from 27 Latin American countries attended the event, a demonstration of the anti-imperialist solidarity built by Venezuela throughout the continent. As former Paraguayan president Fernando Lugo remarked, ‘Who said Hugo Chavez is absent?... Chavez is not only the patrimony of Venezuela, but of all Latin America.’ The event, organised by the leaders of the governing United Socialist Party of Venezuela (PSUV), was a triumphant rebuttal of attempts by the country’s counter-revolutionary opposition to destabilise the country by declaring Chavez’s absence unconstitutional – a timely reminder of where the real power in the country lies.

The political representatives of Venezuela’s capitalist elite, the MUD coalition (Roundtable of Democratic Unity) have inevitably attempted to exploit Chavez’s illness, claiming that allowing him to miss his official inauguration date amounted to a coup d’etat by the PSUV. The reactionary Catholic church weighed in: Bishop Diego Padron, president of the Venezuelan Episcopal Conference, made the widely-publicised claim that ‘the nation’s political and social stability is at serious risk’. The privately-owned media demanded fresh presidential elections, perhaps forgetting the opposition’s rout in the state governor elections of December 2012, in which the governing party won 20 out of 23 states. Although voter turnout was much lower than the 80% of October’s presidential election, it reaffirmed the country’s support for the PSUV which polled 4.8 million votes to opposition candidates’ 3.8 million. And while Henrique Capriles, the defeated opposition presidential candidate, held on to the key governorship of Miranda state, overall the opposition lost five seats.

In an attempt to foment division in the PSUV leadership, the opposition also called for the president of the National Assembly, Diosdado Cabello, to take over running the country from the man specifically named by Chavez as his second-in-command, Vice-President Nicolas Maduro. The opposition paper El Universal even claimed that the postponed inauguration could be ‘the worst crisis in the history of the republic’. Such crass hyperbole ignores of course the policy of state-sponsored slaughter and torture of peasants, students and revolutionaries during the so-called ‘model democracy’1 of the 1980s, culminating in the Caracazo riots of 1989, when soldiers were sent into the barrios to murder thousands. Nor, in the more recent past, does the opposition’s new-found love for democracy sit comfortably with the failed 48-hour coup it initiated against the Bolivarian Revolution in April 2002, when it kidnapped President Chavez, dissolved the National Assembly and declared the 1999 constitution void.

In reality, Venezuela’s constitution is clear. Article 233 states that a president can only be declared permanently absent, necessitating fresh elections, through ‘death, resignation, destitution decreed by the Supreme Court, mental or physical incapacity certified by a medical council designated by the Supreme Court with the approval of the National Assembly, abandonment of the post, (or) a popular recall of the mandate’. Currently Chavez’s status is ‘absence from the national territory’. If eventually declared a ‘temporary absence’ from the presidency, it remains legitimate for 90 days, which can be extended for a further 90 days.

The opposition’s attempts to destabilise the political process have, however, cut little ice, as an email from Primero Justicia, Capriles’ party, admits: ‘It is difficult to convince people that those who held power before October – and also won the election – are now governing thanks to a coup... We can’t be seen as trying to gain via a technicality what we have yet to achieve via the vote.’ 2

Nor have the opposition’s attempts to suggest division in the leadership of the PSUV – rumours eagerly seized upon by the international press – any basis in reality. Both men are long-serving revolutionaries in their own right. Cabello is a former member of the armed forces who played a key role in the first, failed military uprising led by Chavez in 1992 and was jailed alongside him for two years. Maduro, a former bus driver, has been a trade union activist since the 1970s, organising fellow workers within the Caracas Metro system. It was he who led the campaign that secured Chavez’s release from prison in 1994. Throughout Chavez’s presidency the two have worked closely together, playing a leading role in the Bolivarian Revolution and the PSUV. In late December, Maduro emphasised ‘We are brothers and sisters in Chavez... We are more united than ever’. Cabello denounced those who ‘are trying to take advantage of Chavez’s health’, adding: ‘In Nicolas we will not lose our revolution’. Their response to the machinations of the opposition and imperialist press has been that of socialists – to trust in the people.

Chavez is the people

The people of Venezuela are clear: to defend Chavez is to defend the gains that have been achieved so far through the Bolivarian Revolution, and the process of building socialism on the basis of the Programa Patria on which Chavez was re-elected. They identify with Chavez because he has so precisely and consistently reflected and met their needs and aspirations. As Minister for Foreign relations Elias Jaua explained: ‘Being Chavista is knowing that power belongs to us as a people and not to the rich.’

In the last ten years, Venezuela has achieved the lowest levels of inequality, as measured by the Gini coefficient, in the region; it has been declared an illiteracy free country; brought infant mortality down from 25 per 1,000 to 13 per 1,000 live births; slashed levels of extreme poverty; provided free health care and education for all; built hundreds of thousands of units of social housing; cut unemployment by half and tripled the number of people eligible for public pensions.

These are the very real gains that Chavistas are determined to defend – and have shown time and time again that they are willing to fight to do so. The tens of thousands who marched down from the barrios of Caracas in 2002 to risk their lives outside the Miraflores palace alongside loyal rank-and-file soldiers and defeat the US-backed coup against Chavez; the committed workers of the state-owned oil company PDVSA who defeated a bosses’ strike against the Bolivarian Revolution by restarting oil production; the volunteer members of the civilian Bolivarian militias, armed and ready to defend their sovereignty; the participants of over 30,000 communal councils building participatory democracy step-by-step…these remain the bedrock of the Bolivarian process and the guarantor of its momentum towards socialism.

The opposition and imperialist press like to portray the Venezuelan economy as having gone into freefall under Chavez. Moises Naim – who prior to being an executive director of the World Bank and an editor of the US’s Foreign Policy magazine, was a key minister in the bourgeois 1989 government whose devastating austerity measures sparked the Caracazo uprising – is no exception. He claimed in the New York Times in January that Venezuela faces an economic crisis which ‘includes a fiscal deficit approaching 20% of the economy, a black market where a US dollar costs four times more than the government-determined exchange rate, one of the world’s highest inflation rates, a swollen number of public sector jobs, debt ten times larger than it was in 2003, a fragile banking system and the freefall of the state-controlled oil industry, the country’s main source of revenue.’ In fact, this neoliberal economist is pulling his figures out of thin air. In September 2012, the International Monetary Fund estimated Venezuela’s fiscal deficit at 7.4% of GDP and its interest payments at 3% of export earnings. Venezuela’s ‘swollen’ public sector is actually around 18.4% of the workforce, lower than in most European countries; and Venezuela ended 2012 with GDP growth of 5.5% and an inflation rate of 19.9%, which although high, is a significant reduction from 27.2% in 2010, not to mention its peak of 103.2% in 1996, prior to Chavez’s first presidency.3

Meanwhile, the process of implementing Programa Patria, Chavez’s manifesto aimed at entrenching socialism within the country, has already begun. In his oath of office, Vice President Maduro swore ‘to defend…the right to build socialism in our country. I promise to carry out the programme of the country in every neighbourhood, in every factory, in every school, in every corner…’. By mid-January, Venezuela’s coalition of revolutionary social movements known as the Great Patriotic Pole (GPP) had begun this task, holding forums across the country to discuss the programme’s implementation. Step by step, the Bolivarian Revolution’s clear plan for implementing socialism is beginning to be put in place.

Such a programme is in direct opposition to Venezuela’s ruling class, and its imperialist backers; with Venezuela holding the largest known oil reserves in the world, a lot is at stake. The opposition is pulling out all the stops, complementing the media offensive with its signature strategies of civil disorder and economic sabotage. The Mendoza family, oligarch owners of the private food monopoly POLAR, has again been at the centre of an orchestrated campaign to stoke popular unrest by deliberately creating food shortages, hoarding of hundreds of tons of the maize flour that is a staple of Venezuelan diet in POLAR warehouses around the country. The product had been absent from supermarket shelves in key areas for weeks. In addition, 8,000 tons of refined sugar were found during a raid on a Pepsi-Cola warehouse in Aragua state.

There are also sinister signs of opposition attempts to foment violence on the streets. Most recently,

the right-wing student group ‘Manos Blancas’ staged violent demonstrations, particularly in Tachira state where the public buildings of the Family Foundation and Women’s Institute were attacked.

In response, the GPP has organised Patriotic Popular Assemblies to ‘maintain an agenda of permanent and constant mobilisation for the formation of blocks of revolutionary forces prepared to fight in defence of the homeland and the Commander President Hugo Chavez’. In the face of threats by the opposition to hold an anti-Chavez demonstration on 23 January, local collectives, the trade union federation and the Communist Party of Venezuela joined the PSUV in a counter-mobilisation to prevent the forces of reaction taking over the streets – forcing the opposition to back down. This kind of popular mobilisation, headed by the social movements and organised communities, exemplifies the determination of Venezuela’s revolutionaries to defend their gains. Of course there are inevitable divisions, debates and differences within these revolutionary forces as Venezuela moves from a struggle of national independence, to the struggle for socialism. Without such a process, there could be no progress. However, on the question of defending the gains of the last

14 years from counter-revolutionary threat, all Chavistas are absolutely united and prepared to fight tooth and nail. The battle lines are being drawn. Our role as communists in imperialist Britain is to stand with those defending the Bolivarian Revolution, to celebrate with them the legitimacy of the Chavez presidency and undermine the media war against Venezuela in its struggle to achieve socialism.

1 In reality, this government was anything but democratic, arising as it did out of an electoral pact, known as the Punto Fijo, formed in 1958 after the defeat of the military dictator Perez Jimenez with the sole aim of establishing political stability in the interests of the national bourgeoisie and multinational oil companies.