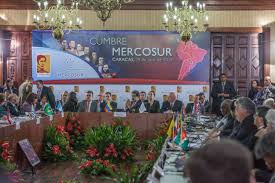 “For Venezuela Mercosur continues being the most consolidated bloc in our region from the commercial point of view, which has the greatest potential to keep advancing in the creation of a great economic zone in our Latin America and the Caribbean,” he said.

“Mercosur continues being the natural space for the promotion of a productive [economic] policy in Venezuela, a policy of exportation to which we will dedicate all our effort from this moment with the help of each member country,” the foreign minister stated.

Of behalf of the Venezuelan foreign ministry, Jaua gave a report on Mercosur’s progress during the past year. This included 220 meetings on social, political, economic and institutional issues, with new agreements and rules being created.

Significant joint statements by Mercosur countries were also issued during the past year, such as: the proposal to construct a complementary economic zone with other regional groupings; the condemnation of U.S. espionage of the region’s governments; negotiations between Mercosur and the European Union; support for the Venezuelan government during opposition destabilization earlier this year; and a special declaration supporting Argentina in its dispute with U.S. based speculative hedge funds.

Other Mercosur foreign ministers likewise mentioned their support for the performance and potential of the bloc.

Paraguayan foreign minister Eladio Loizaga expressed his country’s satisfaction at being able to participate in Mercosur once again, following the election of a new government in Paraguay and its acceptance of Venezuela’s membership of the bloc. Paraguay was suspended from Mercosur in June 2012 after liberal and conservative forces launched an “institutional coup” against then leftist president Fernando Lugo.

As a precursor to Tuesday’s presidential summit meeting, on Sunday almost 250 business figures from Venezuela and the wider region met to discuss strategies for further economic integration.

According to Venezuelan state media agency AVN, proposals were made on training, social responsibility and the need for a new regional financial architecture.

“Today more than ever, the political, social and economic consciousness of Latin American and Caribbean business has awoken. We can say that we support our presidents, their political decisions and that we are for regional integration and are with the development of the productive and technological capabilities of Venezuela,” said the president of the Venezuelan Federation of Small, Medium and Artisanal Industries, Miguel Perez Abad.