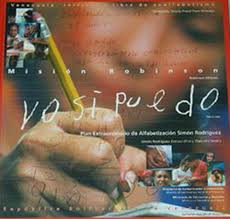 Bolivian deputy minister of Alternative and Special Education, Noel Aguirre, said Friday that his country's improvement could be largely attributed to Cuba's “Yes I can” (Yo Si Puedo, YSP) literacy method. Since the election of Evo Morales as President in 2006 the Bolivian government has used used the program to teach reading and writing to urban and rural populations.

Most of Bolivia's remaining illiterate population are elderly and live in remote locations, says the country's Institute for National Statistics (INE).

Bolivia is showing off its achievement with an exhibition at the National Art Museum in La Paz. Photos and testimonies on display will show the history of literacy in Bolivia and demonstrates, according to Aguirre, how much of a turning point the YSP program represents for the country.

The Venezuela also saw massive results from the YSP program, which has used its multimedia resources to help millions learn how to read and write. The adminstration of late Venezuelan President Hugo Chavez implemented the program in 2003, and by 2005 UNESCO declared the country illiteracy-free.

"Illiteracy was eradicated with the Revolution," Chavez said during his presidency. ?

International Literacy Day was established by the U.N. General Assembly in 1965 and happens annually on September 8.