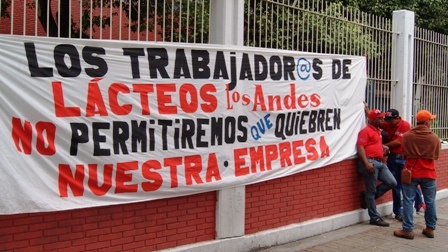 Since Diana Industries was nationalised in 2008, it has developed a production management system organised by its workers through assemblies and a ‘socialist workers’ council’. Diana produces cooking oil, margarine and by-products, 80% of which are sold at subsidised rates in state-run food distribution networks such as PDVAL and MERCAL. The workers’ council boasts a production boost of 160% since nationalisation, stating they have contributed over 35m bolivars (nearly $6m) for national investment. Despite these achievements, Food Minister Felix Osorio appointed without consultation businessman David Mendoza as head of the company. Mendoza owns five small private companies, three of which have gone bankrupt. He arrived at the plant to take on his management position accompanied by armed guards and refused to consult with the existing structures of worker control and management. On 31 July, workers evicted Mendoza and occupied Diana’s head offices. In response the Food Ministry froze company bank accounts and prevented distribution trucks from picking up produce. However, employees continued production throughout their three week protest, making it clear that they were working to defend Venezuela’s food supply. President Nicolas Maduro responded to public pressure by sacking Mendoza and appointing Dester Rodriguez, a former army brigadier, instead. Whilst Rodriguez is cooperative with Diana’s collective control model, the measure falls short of the workers’ demand to appoint their own company head and Food Minister Osorio remains in post. It will take many more such battles and popular pressure to force out opportunists like Mendoza with their armed security guards and connections to power in high places.

A further victory was won in the state-run milk company Lacteos Los Andes which was nationalised in 2008 following its role, as a private company, in creating scarcity and speculation on milk. On 19 August, Lacteos workers protested outside the National Assembly in Caracas, denouncing forced reductions in production due to a lack of inputs. They exposed the discovery of trucks waiting at La Guaira port, claiming that whilst Venezuela experienced milk shortages, these trucks were transporting milk production materials to be sold abroad at increased prices, a clear act of sabotage. Lacteos workers also demanded the company open the account books and ensure sufficient trucks to deliver their products. Following the protests, Maduro’s government agreed to dismiss the management and guarantee imports of the necessary resources; it supported a workers’ assembly which nominated and elected a new ‘worker president’ as part of developing collective management.

The ongoing battle at ‘Socialist company Pedro Camejo’ which coordinates agricultural machinery and transport, illustrates the powerful links that are being built between workers collectives, farmers and community organisations to combat food shortages and sabotage. On 26 August, workers began to occupy factories and close roads in the agro-industrial corridor of Urachiche in Yaracuy state, as the company was failing to provide the necessary parts for agricultural machinery in time for the coming harvest. If the situation is not resolved Yaracuy could lose 500,000 kilos of beans and 40 million kilos of corn, representing a disaster for food supplies for the whole country. Instead of cooperating to resolve the problem, national managers Ricardo Miranda and Laura Lorenzo threatened to dismiss all the workers involved in the protest. With the support of seven ‘Zamoran’ farmers collectives and activists from the ‘Hugo Chavez Frias’ comuna, workers recovered 25 engines and eight combine harvesters in order to begin the harvest. Whilst there has so far been no national governmental response, the protests have been backed by Nelbis Galindez, mayoral candidate and secretary of the local United Socialist Party of Venezuela (PSUV) branch. Galindez supported the workers in a meeting on 17 September with the Yaracuy state legislative council, where Legislator Angel Gamarra, the highest authority of the regional parliament, agreed to dismiss the current management of Pedro Camejo, begin a criminal investigation into allegations of abusive mismanagement, and begin the process of developing worker control of the company.1

These are fundamental victories for working class forces in Venezuela, demonstrating that the battle to guarantee food security is tied up in the battle for workers’ control. The current success at Pedro Camejo clearly depends on the unity between collectives, farmers and community organisations. As we have continually argued, it is this kind of grassroots organisation and determination which is the only guarantor of building socialism.

Throughout the year Venezuela has seen shortages in the supply of basic foodstuffs and other products. Data from the Central Bank of Venezuela reports that whilst the monthly inflation rate dropped to 3.2% in July – half of its peak rate in May – the food scarcity index has remained high at 20% and inflation reached 32.9% for the first eight months of 2013.2

In order to ‘fight the economic war’, President Nicolas Maduro has created a High Economic Commission, grouping together all ministers and departments connected to food production and distribution. Maduro, who will personally direct the commission, urged cooperation with communes and social movements through the formation of economic committees in order to ‘guarantee the Venezuelan economy from the grassroots’.

It is essential that the socialist leadership of PSUV and the Bolivarian government tackle economic sabotage, hoarding and speculation by private profiteers like POLAR; however it must also address opportunist elements within its own ranks, rooting out corruption and opportunism in state-run industries. This requires seizing control of private production, whilst developing and promoting worker participation and control. Maduro has explicitly stated that popular power is crucial for his ‘revolution of the revolution’. A census at the beginning of September which registered 1,150 comunas and 31,670 community councils, both established and under construction, is a welcome reflection of steps being taken towards this. However, the renewed push to construct comunas must be coupled with workplace mobilisations to guarantee success in the battle against food shortages. Such collective organisation is vital in the struggle for socialism in Venezuela.