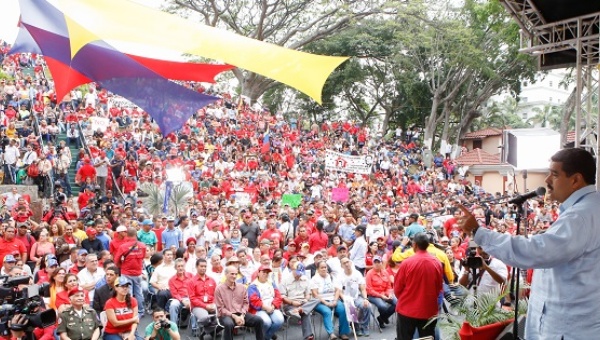 In only two days over two and half million Venezuelans have signed a petition expressing their rejection of a bill approved by the opposition-controlled National Assembly that aims to grant amnesty to a number of jailed opponents of the socialist government.

President Nicolas Maduro told a crowd of supporters Thursday that he believed the country's Supreme Court would declare the bill unconstitutional, which will now be sent to the country's highest court for final consideration.

“The people should rebel against unconstitutional laws,” exclaimed Maduro.

“It is my duty as head of state to ensure constitutionality (and) justice so there may be peace in Venezuela,” he added.

Supporters of the government will continue to collect signatures against the law for the next few days before presenting them to the Supreme Court.

The protest was convened by the United Socialist Party of Venezuela, or PSUV, and was joined by other social and political movements.

The so-called “Amnesty Law” covers the period beginning with the arrival of former President Hugo Chavez to the presidency in 1999 to the present.

The legislative measure seeks to release approximately 115 incarcerated convicted criminals, including some who participated in the coup against President Hugo Chavez in 2002, as well as many of those that both organized and participated in violent protests.