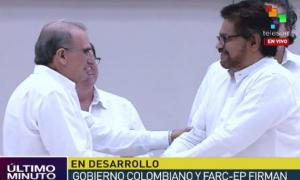 Representatives of the Revolutionary Armed Army of Colombia (FARC-EP) and the Colombian government forces signed an agreement this Tuesday on the issue of victims of armed conflict, within the framework of the peace talks.

The pact is the fourth major agreement between the parties during the peace negotiations in Havana since 2012. Other big deals covered land issues and rural development, political participation of the insurgency and drug trafficking.

A delegation composed of 10 representatives affected by the armed conflict left for Havana on Monday to sign the agreement on Tuesday, which touches on truth, reparation and guarantees to not repeat violence, as well as a system of transitional justice.

Before signing the final deal on the peace dialogue, the talks will entered their final stage aimed to cement the end the conflict. Both parties will also discuss mechanisms to ratify, implement and ascertain a possible final consensus.

The representative delegation of the FARC-EP presented a 10-point proposal on Monday to ensure an end to the war and make a significant contribution to building a stable and lasting peace.

The text, published on the website of the insurgency group, detailed initiatives on two agenda items currently discussed with the government of President Juan Manuel Santos, including a bilateral ceasefire and the disarmament of the rebels and the end of armed operations against them.

Last September, the two parties signed a preliminary 13-point agreement to achieve an end to the conflict that has gripped the country for over 50 years.

One of the most important points for the FARC-EP has been recognition as a political movement in Colombia, as well as an end to paramilitarism, which has led to thousands of internal displacements, especially in the countryside.

The parties aim to sign the final peace agreement before March 23, 2016.