Published on 29 January 2016 by Telesur English 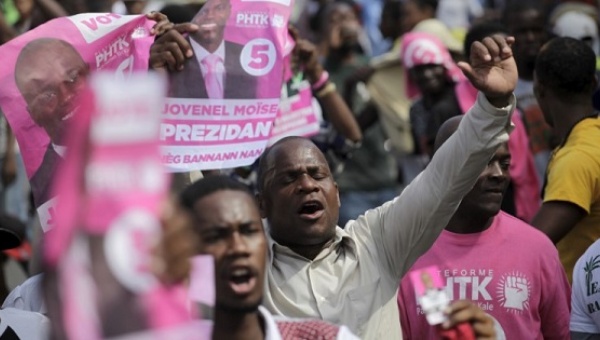 Haiti's President Michel Martelly announced that he will not leave his post in government next week if another leader is not elected into office, saying he will not leave the country “in the midst of uncertainty.”

The announcement comes after widespread protests over alleged electoral fraud in October's presidential elections led to the indefinite suspension of the second round of voting.

Despite the election suspension, there was some speculation that Martelly would still leave office by his Feb. 7 deadline with an interim government installed in his place, however the president shot down these plans Thursday.

“I will not accept handing over power to those who do not want to go to elections,” said Martelly. “After February 7, if you have not reached an agreement, I will not leave the country in the midst of uncertainty,” added the Haitian president.

The current political crisis goes back many years, however, according to Haitian historian Susy Castor, talking to teleSUR. “Its an expression of situations that haven’t been solved for over a century, from when we had the North American occupation in 1915 … and the post occupation system hasn’t solved our problems.”

Amidst the political crisis, it was also revealed Friday that President of the Electoral Council, Pierre-Louis Opont, was resigning from his post.Opont announced his decision to the president via a letter Thursday, which was leaked to the press Friday. The resignation had long been demanded by the opposition and Haiti's economic forum who accused the former electoral president of fraud in the first round of the presidential elections in October.

The future of Haiti's elections are unclear, but the opposition wants Martelly to step down and the president of the Supreme Court to lead an interim government in his stead. They have also asked the top court to investigate allegations of electoral fraud as well as replace the members of the country's electoral authority and set a new date for elections.