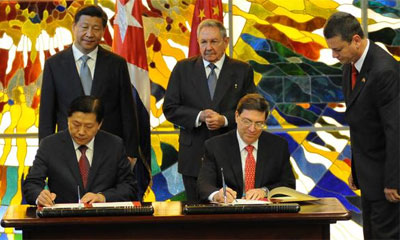 The accords, aimed at further strengthening economic, commercial, cultural relations included a frame agreement of collaboration in the cyberspace, the granting by China of a line of credit to build a multi-purpose terminal at the Santiago de Cuba harbor, a free-of-interest credit line and a donation.

Other documents signed focused on transfer of technology, the development of renewable energies, biotechnology, environment monitoring, and the setting up of a Cuba-China pilot farm.

The two parties also signed protocols to control the quality of tobacco and sugar being exported to China, the increase of participation in the oils sector and the setting up of a corporation to be named Bello Monte S.A. Bilateral exchange in the education sector was also included in the accords.

Previous to the signing of the accords, Xi Jinping was granted the Jose Marti Order in acknowledgement of his friendship and solidarity with the Cuban people. Xi said he was honored to have been granted such high distinction.