A hero returns to his homeland 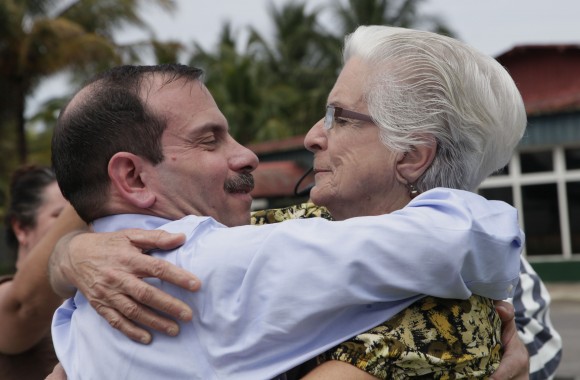 On February 28, just after noon Havana time, Fernando Gonzalez Llort, one of the Five Cuban patriots arrived in his homeland  after having served every minute of his unjust sentence in U.S. prisons.
Fernando who was handcuffed until the moment that the plane touched down was finally able to embrace his mother Magali Llort and sisters, and his wife Rosa Aurora on Cuban soil.

Receiving Fernando at the airport was President Raúl Castro and high level figures of the Cuban Government. This was followed by an emotional embrace of Rene who he had not seen since the time of the trial in Miami in 2001.

Also receiving Fernando with open arms were the mothers of the Cuban 5 and the wives of his brothers Gerardo and Ramon. In all of those embraces were the presence of Gerardo, Ramon and Antonio.
For all of us in the solidarity movement for their cause we celebrate the dignity and the adherence to the principles of resistance that Fernando maintained. During all these years of incarceration he never wavered or lost the smile on his face.
The shared joy of seeing Fernando together with his family, his people and  the leadership of the Cuban Revolution strengthens the hope that through international solidarity we will achieve freedom for Gerardo, Ramón and Antonio sooner than the obscene lengths of their sentences.
The arrival of Fernando back on Cuban soil commits us all to continue the struggle until the return of each of the five is complete.


International Committee for the Freedom of the Cuban 5