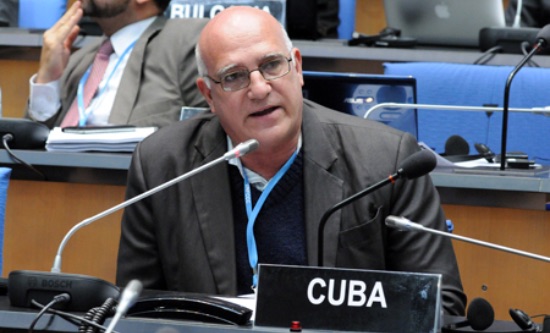 FRFI speaks to Orlando Ernesto Rey Santos, lead negotiator for Cuba at COP26 and Climate Advisor in Cuba’s Ministry of Science, Technology and the Environment. He discussed the island’s participation in the United Nations Climate Change Conference and its evaluation of COP26 which he attended in Glasgow from 1-12 November 2021.

FRFI: Cuba participated in COP26 within different multilateral blocs and associations. What are those institutions and coalitions and why is it necessary for developing and underdeveloped countries to collaborate in international forums?

Cuba participates in the negotiations as part of the Alliance of Small Island Developing States (SIDS-AOSIS), as part of a coalition of ALBA (Bolivarian Alliance for the Americas)countries and is also a member of the Like-Minded Developing Countries (LMDC) Group.* All these groups, in turn, participate in a larger coalition, which is the Group of 77 and China, which integrates all the developing countries.

Participation and negotiation in groups is vital. On the one hand, it makes it possible to cover topics that cannot be addressed with small delegations. For example, on this occasion Cuba had four delegates participating in the negotiations, but there were about 70 items on the agenda. Very important aspects, such as climate finance, are in turn divided into many sub-themes, in each of which independent decisions are negotiated. The only way to have an overview and give attention to the negotiation issues is through these groups. For example, the group of Small Island Developing States (SIDS) has very solid positions on adaptation and issues of loss and damage. Therefore, Cuba has defended its national positions through the work of that group and can focus its small delegation on aspects that are less well covered or where there may be different positions. Each group contributes different positions. In the case of the LMDC Group, its position on the historical responsibilities of developed countries, differentiated responsibilities and the right to development is very solid, all of which is very consistent with the positions Cuba holds. The other point is that when positions are presented by a group, they are much more solid and achieve greater support in the negotiation.

FRFI: What were the main conflicts of interest inside the conference?

Conflicts of interest in climate negotiations are unchanged since the outset. It is interesting to see how, since 1991, when the text of what is today the United Nations Framework Convention on Climate Change was being negotiated, essentially the same differences have remained, and only nuances and circumstances have changed. The main point is that the developed nations, which are historically responsible for climate change – the United States being most responsible – refuse to fully assume responsibility and want to transfer part of that burden to developing countries.

For their part, developing countries are aware that we must all cooperate in confronting climate change but argue that this must occur in a differentiated way. To sustain this, there is a principle in the negotiations, which comes from the Rio Summit in 1992, according to which the developed countries must bear the greatest burden of obligations, as those historically responsible and those with the financial means and technology to do so. One aspect of this principle is that industrialised countries must provide developing nations with financial resources and technologies, and contribute to capacity building. However, the developed countries not only fail, as a group, in the expected contribution to reducing emissions, but they also do not provide the financial resources agreed. In 2010, they pledged that from 2020 they would provide $100bn annually for the adaptation and mitigation needs of developing countries. However, we are in 2021 and the figures that they themselves present do not reach $80bn. It is important to emphasise that these are their figures. Independent analyses indicate that the real amounts are much lower, since important sums are loans and not donations, so the real amount could be around $40bn. If we add to that the fact that some analyses of financing needs of developing countries indicate that between $700bn and more than $1 trillion are required, it is clear that there is an immense gap in financial support, which is now aggravated under the conditions created by the Covid-19 pandemic.

FRFI: What is Cuba’s assessment of the agreements and statements to come out of COP26? What do these mean in terms of the global climate emergency?

A realistic analysis indicates that these results are acceptable. The meeting complied with resolving all pending issues from COP24 and COP25, and launched important new processes. Our impression is that part of the problem is that the media helps to create unfounded expectations for meetings of this type. No meeting in itself is going to ‘save the planet’.

The difficulties and conflicts that afflict the modern world go far beyond the climate debate; we live in a profoundly unequal world, with growing gaps between rich and poor. Before defaulting on climate finance commitments, developed nations had been defaulting on Official Development Assistance for decades. It is enough to observe the handling of the Covid-19 crisis, the unequal access to vaccines, the deepening of indebtedness of developing countries. It is in this environment that COP26 takes place. The responsibility for producing a perfect and ambitious result cannot be placed on the shoulders of the developing countries, in a world so unfair and unbalanced.

It is also dealing with tremendously sensitive issues; if the use of fossil fuels has led us to the growing threat of climate change, it is also true that more than a billion people in the world today lack access to adequate energy. This transition from the current situation to a world where every human being has equitable access to clean energy requires a political commitment that developed nations are not willing to assume.

FRFI: How much interest is there from other nations in Cuba’s unique contribution to climate change adaptation and mitigation – the State Plan to Confront Climate Change, known as Tarea Vida (‘Life Task’).

There is definitely a lot of interest. It draws recognition and even some amazement, that in the national circumstances of a country so harassed, which suffers a [US] blockade of more than 60 years at the hands of the most powerful nation in the world, we can structure and implement a State Plan of that dimension, with a solid scientific foundation. It is also what happens with other achievements of the Cuban Revolution, such as our national vaccines for Covid-19.

The ‘Life Task’ has distinctive elements that strengthen international interest. First of all, it is a fully national product. It was Cuban scientists who provided the foundations, and the public administration that prepared the text and conducted the consultations that led to its adoption. Since the process was first proposed at the end of 2016, until today, the country’s top leadership has continued to pay it permanent attention. The flexibility of the ‘Life Task’ has also been very important. Each sector and each territory have adapted it to their specificities and needs; there is a plan for health, another for the organisation of the territory, for transport, agriculture, and so on. The ‘Life Task’ establishes founding principles, but there is great scope to work flexibly and incorporate all local visions. The time scale is another important element, ‘Life Task’ aims to project its actions throughout this century. We know that climate problems are evolving, and that many of the worst consequences have yet to manifest themselves, so a long-term vision is required, because what we do today will have repercussions for decades to come. All these factors make the ‘Life Task’ very attractive and generate interest in it. Cuba has been very pleased to share these experiences and aspires to expand this joint work with developing countries, and in particular with the most vulnerable.

FRFI: Is there anything you want to add?

Confronting climate change is today the most important global challenge facing humanity, which is why it also constitutes a key scenario for the political fight against capitalist ideology. Scientific evidence today eliminates any possibility of repeating climate denialism and supports the thesis that it is necessary to move away from capitalism today in order not to surpass planetary limits. Faced with these defining challenges for the future, the debate and ideological confrontation go beyond the scope of multilateral negotiations to also encompass the academic sphere and that of social movements. For the social sciences, it is a real challenge to build a new global paradigm that fosters shared prosperity and poverty reduction while preserving the balance and respecting the limits of the planet.

* LMDC group is made up of around 24 countries which represent more than 50% of the world’s population.