Details
Written by Other sources
Created: 16 May 2016 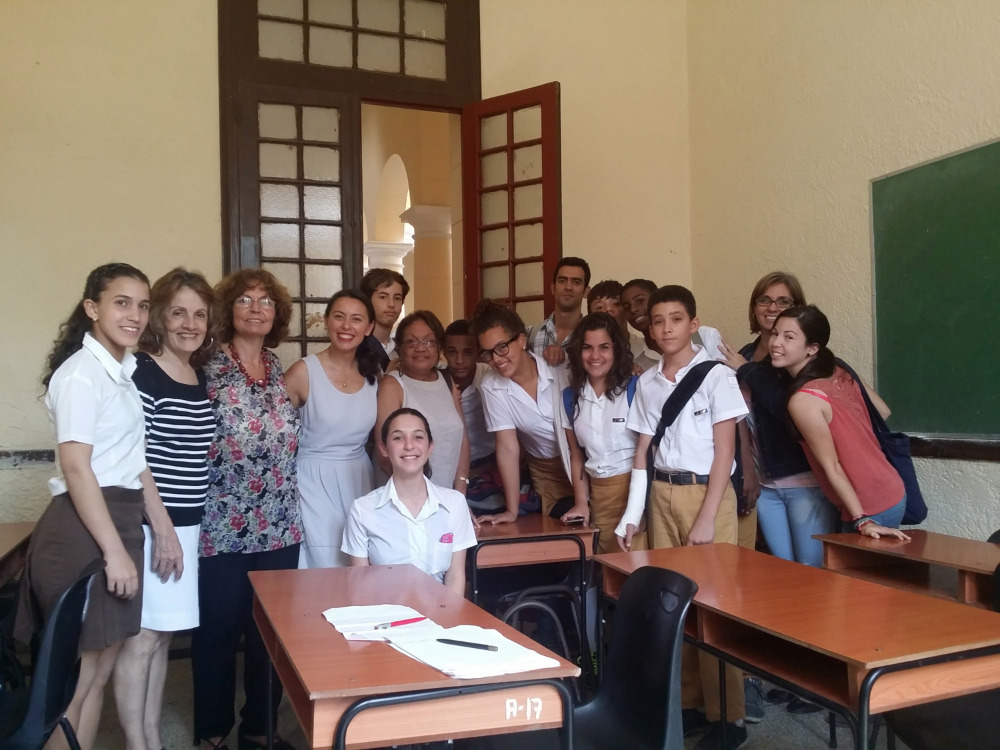 Published on 12 May by counterpunch.org by Helen Yaffe

In late April 2016, British Foreign Secretary Philip Hammond became the highest-ranking British government minister to visit revolutionary Cuba. He signed four memorandums of understanding for cooperation in higher education, energy, culture and in the financial and professional services sector, including an agreement to restructure Cuba’s debt to Britain. Hammond affirmed that Britain, and the European Union, are in favour of lifting the 55-year old United States blockade of island.

As a sign of just how punitive the blockade remains, earlier that month a group of Cuban musicians based in Britain had their money withheld by Eventbrite, a US website-based company. Cuban pianist Eralys Fernandez, who lives in London, had used the ticket sales website for a classical music concert held in an East London church in mid-March.

The concert, supported by a group called Cubans in the UK was a fundraiser for a project to ‘send a piano to Cuba’, which aims to raise £10,000 to buy a second hand concert piano to send to the Conservatory Amadeo Roldan in Havana. Despite being one of the most prestigious institutions in Cuba, its existing grand pianos are in a poor condition. The Conservatory has struggled to get access to new pianos, largely because of the US blockade, and there are no piano producers or retailers in Cuba. The project has been endorsed by Sting and now has Cuban musicians throughout Europe signed up to support.

After the concert, Eventbrite informed the organisers that ‘we were contacted by our bank to let us know that the payout we initiated on 17 March 2016 for £360 has been temporarily held’. They wanted to know of ‘any direct or indirect benefit to Cuba or a Cuban in this transaction’. The organisers, who have dual British and Cuban citizenship, answered in the affirmative; it was obvious from the name and description of the event that it was fundraising to send a piano to Cuba. A month later, Eventbrite confirmed that the ticket money was withheld ‘pursuant to US Department of Treasury, Office of Foreign Asset Controls (OFAC) regulations and sanctions program’ – in other words the US blockade. ‘In order to have the funds released’, advised Eventbrite, ‘you will need to obtain a license from the US Treasury Department’.

Director of Cubans in the UK, Daniesky Acosta, said they had no intention of applying for an OFAC licence. ‘It would mean legitimising the 55-year old US blockade, which has cost our country over (US) $1 billion and which almost every country in the world opposes in the annual UN General Assembly vote on it.’ They were already seeking legal advice on the matter.

It is extraordinarily intrusive for OFAC to regulate how or where British, Cuban or any other citizens can spend their money. The concert tickets were sold to the British public in pounds sterling, not in US dollars. The organisers did not event know they were using a US company, as the website appeared to be based in Britain. However, under EU regulations, Eventbrite should be mandated to abide by British rules, which include no such sanctions against Cuba. The fact that they are not shows the extraterritorial impact of the US blockade and the weakness of Hammond’s assertion that Britain wants improved relations with Cuba.

Acosta said: ‘We do not need a license to send money to Cuba from the United Kingdom, We do not have one and we are not going to apply for one in order help our own people. In fact, we are not sending money to Cuba; we are raising money to buy a piano from a UK retailer.’ For these British-based Cuban artists it seems that the US blockade has been tightened for non-US citizens and companies since diplomatic relations were restored between Cuba and the US. They are not alone. The Cuba Solidarity Campaign recently has its Cooperative Bank account closed and the group Rock around the Blockade had its Paypal account shut down, both under OFAC regulations, even while the head of Paypal joined Obama’s 1,200-strong delegation to Havana. Is this part of a US soft-power strategy; to strengthen US engagement with Cuba, while constricting trade and exchange from third countries?

In December 2015, Lord Hutton, chairman of Cuba Initiative, an independent, bi-lateral, non-governmental organisation to promote British-Cuban relations, put a formal question to the British Treasury: ‘To ask Her Majesty’s Government what advice has been given to UK banks regarding business and personal financial transactions between UK individuals or UK-registered companies and Cuban counterparties based in Cuba.’ The answer he received is cited in full below.

Cuba has previously been subject to the Financial Action Task Force (FATF)’s on-going Global AML/CFT Compliance Process due to concerns over strategic deficiencies in its systems for anti-money laundering (AML) and combatting terrorist financing (CTF). HM Government notifies the financial sector of FATF’s decision to list countries and the risks associated with transactions with identified countries. In October 2014, the UK welcomed Cuba’s significant progress in improving its controls and noted that Cuba was no longer subject to the FATF’s monitoring process. This was also communicated to industry.

There are no UK, EU or UN sanctions regimes restricting transactions between the UK and Cuba. The US has economic sanctions against Cuba. EU legislation (Council Regulation (EC) No 2271/96) provides protection against and counteracts the effects of the extra-territorial application of US Cuba sanctions within the EU. The Government does not provide advice on sanctions regimes outside UK jurisdiction and does not intervene in the decisions of banks or other financial firms when made on the basis of their internal risk assessments.

Three months later, on 15 March 2016, OFAC announced amendments to controls on financial transactions, including permitting US banks to process Cuba related US dollar denominated transactions where neither the sender not the beneficiary of the transactions are subject to US jurisdiction. Nonetheless, the frequently asked questions related to Cuba section of their website, states clearly that ‘sanctions’ are still imposed on Cuba, despite the restoration of diplomatic relations between the countries.

‘Most transactions between the United States, or persons subject to U.S. jurisdiction, and Cuba continue to be prohibited, and OFAC continues to enforce the prohibitions of the CACR [Cuban Assets Control Regulations]. The regulatory changes, effective in January, June, and September 2015, as well as in January and March 2016, respectively, are targeted to further engage and empower the Cuban people by facilitating authorized travel to Cuba by persons subject to U.S. jurisdiction; certain authorized commerce and financial transactions; and the flow of information to, from, and within Cuba.’

There are signs that authorities in Europe are starting to hit back against the extraterritorial character of the US blockade. In April 2016, it was reported that a district court in Dortmund, Germany, issued an order against PayPal for applying US laws in the country. Just like the situation with Eventbrite and the piano project in Britain, the German case involved ticket sales through a website-based company PROticket for a musical comedy ‘Soy de Cuba’ (I am from Cuba) and a concert by Cuban signer Addys Mercedes in late 2015. In November, PayPal blockade the PROticket account, citing OFAC regulations. In this case, however, PROticket complained to the German court, which ordered PayPal’s European subsidiary, located in Luxenbourg, to unfreeze the account with immediate effect or pay out 250,000 euros to PROticket if they fail to so. The judges also prohibited PayPal from freezing their clients’ accounts because they use the words ‘Cuba’ or ‘Cuban’.

News about this ruling has not appeared in the British press despite its relevance to similar cases in Britain. The question remains: what will Eventbrite do with the money it has confiscated from Eralys Fernandez, who just wants to help out the music school from which she had the privilege of graduating for free? The next fundraising concert takes place on July 2nd in London. How can the organisers avoid confiscation of their ticket sales money? Let’s hope Philip Hammond honours his declarations in Havana and takes up the case. Only when European authorities take retaliatory action against OFAC regulations will the expropriation of billions of dollars in frozen funds and punitive fines meted out to individuals, groups and businesses around the world for interacting with Cuba be halted. This is, after all, what US President Obama himself has called for.

A Response From Evenbrite, Inc.

As a US company, Eventbrite and its subsidiaries are subject to OFAC. Under OFAC, Cuba remains a restricted country, which means we cannot facilitate any transactions that provide any direct or indirect benefit to Cuba.

We continually monitor and screen our listings to ensure compliance with our legal obligations. If issues arise, we work directly with the organizer.

The Eventbrite Merchant Agreement states that merchants must comply with US law related to restricted countries.

Helen Yaffe is an Economic History Fellow at the London School of Economics and the author of Che Guevara: The Economics of Revolution published by Palgrave Macmillan, 2009. Between 2011 and 2014, she was a Research Associate at Leicester University on a project investigating the history of the anti-apartheid movement in Britain. Her recent commentaries for BBC and Sky News on US President Obama and British Foreign Secretary Philip Hammond’s visits to Cuba can be seen at: http://palgrave.typepad.com/yaffe/