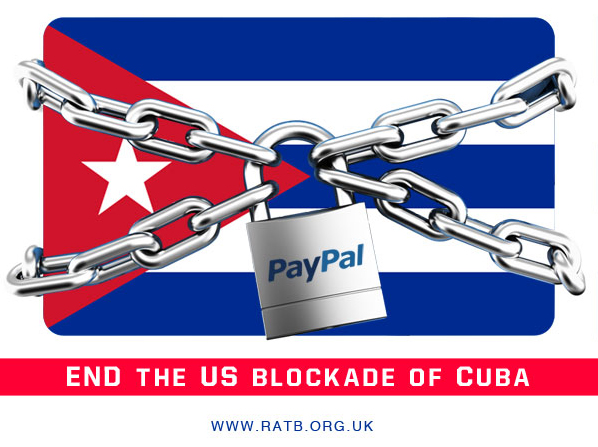 Rock Around the Blockade (RATB) is a campaign of the Revolutionary Communist Group in solidarity with socialist Cuba, which uses its example as part of the struggle for socialism and against imperialism here in Britain and worldwide. This month RATB celebrates its 20th anniversary.

The US blockade has cost the Cuban economy an estimated $1.126 trillion since 1961. For 23 consecutive years the UN General Assembly has voted overwhelmingly to condemn the blockade, with 191 out of 193 nations voting against it this year. On 11 September this year, in contradiction to hypocritical US rhetoric about 'normalising relations', President Obama signed a document to extend Cuba's designation as an 'enemy' under the 'Trading with the Enemy Act' for another year.

RATB uses PayPal to process payments and donations via our website,www.ratb.org.uk The funds raised from merchandise sold go towards our activities in Britain. RATB organises political and educational discussions, film showings, street rallies and cultural celebrations, about Cuban socialism.

Without warning or communication, PayPal has blocked our account, for the second time in two years.

When challenged on the phone, the man we spoke to at the PayPal headquarters in Ireland, gave their reasoning as follows: 'The account is receiving money for Rock Around the Blockade, a campaign in defence of socialist Cuba (this is allowed), selling books and t-shirts (this is allowed). RATB takes donations to send to solidarity brigades to Cuba and proceeds from t-shirt and book sales are used to support the cause and travel to Cuba and this activity is not allowed.'

He went on to say that the account is barred, that no resolution would be possible, that there will be no lifting of the limitation, and that the right to appeal is denied.

Previously, in 2013, the account was blocked due to links with Cuba (citing 'possible trade with Cuba',) but following an investigation which showed that RATB was not trying to send donations to Cuba from our PayPal account, it was unblocked. We had never used our PayPal account to send donations to Cuba, knowing this to be impossible anyway because of the US blockade of Cuba, which we have been writing about extensively for years in our paper, Fight Racism! Fight Imperialism!

At the end of 2014, PayPal was forced to apologise to a small coffee shop in Perth, Scotland, after reporting them to US authorities and threatening to suspend their account if they did not sign an affidavit promising not to contravene US laws. Such is the reach of the illegal US blockade against a socialist country. In a public apology, PayPal said that it was wrong to suggest that Scottish customers may be breaking any laws by buying or selling Cuban coffee. A similar thing happened to the Revolver co-operative in Wolverhampton last year, which imports Cuban coffee and as a result had its PayPal account frozen for several months, damaging the business substantially.

PayPal continues to proactively and aggressively enforce the US blockade, despite the recent loosening of trade restrictions contained within the 'Cuban Assets Control Regulations' and 'Export Administration Regulations', which now allow US financial institutions to open correspondent accounts with financial institutions in Cuba (see FRFI 247). However, these regulations still prohibit Cuba from using US dollars in international transactions, and the US government continues to fine foreign banks for engaging in transactions with Cuba. For example, in 2014 US authorities fined French bank BNP Paribas $8.97bn for breaking sanctions on Cuba, Iran and Sudan, and in March this year fined Commerzbank of Germany more than $2.28mn for violating regulations on Cuba and three other countries.

RATB will fight for the ban on the PayPal account to be lifted, as part of the continuing campaign against the US blockade. Please complain to Paypal using the methods below:

Smash the US blockade! US out of Guantanamo! ¡Viva Cuba socialista!

See also: 'RATB challenges PayPal's block on its account due to US blockade'.