Solidarity events for the Cuban 5 continue 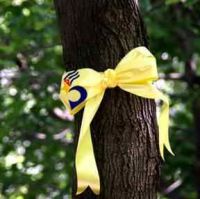 September 2013 sees the fifteenth year of the unjust imprisonment of the Cuban Five. Incarcerated after infiltrating right-wing groups in Miami in order to prevent terrorist attacks on Cuba, the Five and the injustice forced upon them by the US exemplifies imperialist hypocrisy at its finest. More than 3,400 Cubans have been murdered since 1959 as a result of US attacks, but whilst Obama is free to continue the blockade and conceal these acts of terror planned, funded and launched by his government, the Five, under convictions of espionage, remain in US gaols for defending their people. Anti-terrorists, their freedom is being denied by a state that actively promotes terrorism.

Rene Gonzalez, a National Hero of the Republic of Cuba and the first of the Five to be freed from the US, has called for the people to decorate themselves, their homes and their surroundings with yellow ribbons to mark the fifteenth year of incarceration. However he makes it clear that these displays are much more than anniversary observations; they aim to “make it impossible for visitors and the foreign media to ignore the fact that the Cuban people are still waiting for four of their sons who are imprisoned in the United States.”

His speech urged the spread of awareness about the Cuban Five and the exposure of the truth. To show solidarity, to demand the return of the remaining imprisoned and to continue to expose US terrorism, events adorned with yellow ribbons are happening worldwide. The  colourful rallies, demonstrations and marches will extend solidarity to the Five and the people of Cuba, a sign that yet another attack on the Revolution will not be ignored.

Public meeting- Assange, Manning and the Cuban 5, the cost of exposing US terrorism.

Street Rally: Justice for the Cuban 5! Free them now!

Street Rally: Justice for the Cuban 5!