The Cuban 5 are innocent! Free them now! 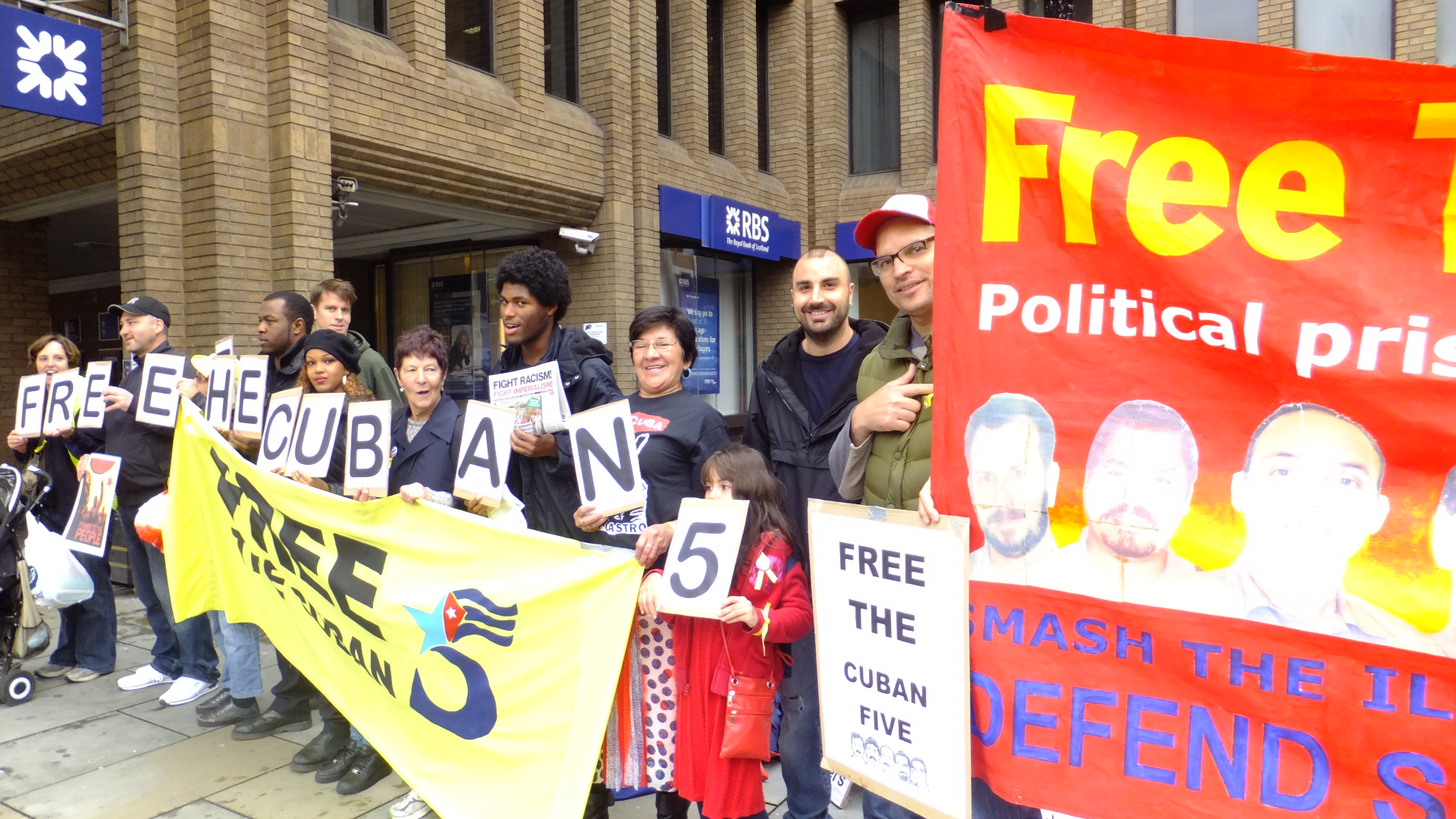 In London on 14 September, comrades and supporters of Rock around the Blockade a campaign of the Revolutionary Communist Group held a street rally demanding justice for political prisoners, 'the Cuban 5'. The event marked the 15th anniversary of their unjust incarceration in US prisons and joined hundreds of solidarity actions as part of the international campaign to release the Cuban 5.

With a Cuban revival of the 1970s hit song 'Tie a Yellow Ribbon round an Old Oak Tree' about a prisoner returning to his loved ones, Rene Gonzalez, one of the Cuban 5 recently freed from gaol in the US and back in Cuba, called for people to wear yellow ribbons to ‘make it impossible for visitors and the foreign media to ignore the fact that the Cuban people are still waiting for four of their sons who are imprisoned in the United States.’

Unjustly convicted for espionage and murder, the five had infiltrated right-wing exile groups in Miami in order to prevent terrorist attacks against Cuba. The US has never prosecuted any of these groups since a trial would expose their own role in the funding and training of terrorist organisations. Ex CIA agent Luis Posada Carriles, who boasts about bombing a Cuban passenger plane in 1976, killing 73 people, walks free in the streets of Miami.

As Ricardo Alarcon, former president of Cuba’s National Assembly, emphazises, ‘Our main strength is the complete innocence of our comrades, and the complicity with terrorism of those who accused and convicted them, in a judicial farce, whose only purpose was to justify terrorist actions against Cuba and to openly defend terrorists.’

Gerardo Hernández, Ramón Labañino, Antonio Guerrero, Fernando González still remain in gaol in the US. Breaking the media blockade and the deliberate censorship around the case is part of our struggle to secure their freedom. Taking up the call from Rene Gonzalez, we took to the streets with a yellow banner and yellow ribbons on our arms. With music and speeches we highlighted the history of the Cuban 5, their dignity and principled revolutionary stand and their significance in the struggle against state terrorism. The Cuban 5 are in prison for defending the Cuban Revolution and its extraordinary gains for humanity. Both at home and through it's international humanitarian missions, Socialist Cuba places human needs above capitalist profits, standing against imperialist war and exploitation, developing international solidarity and mutual cooperation, exporting healthcare and education as opposed to arms and finance capital Contrast this with the austerity measures imposed on the poor and most vulnerable in imperialist countries like Britain, by governments whose only solution to the economic crisis is further cuts, war and repression. Socialist Cuba, the Bolivarian Revolution in Venezuela and ALBA (the Bolivarian Alliance for Latin America) show us that another world is not only possible, but is being built in Latin America today.

As part of the international solidarity action with the Cuban 5, Rock around the Blockade is holding a meeting, Assange, Manning and the Cuban 5, the cost of exposing US terrorism. Thursday 19 September 7.30pm Cathorpe Arms, 252 Grays Inn road, London WC1X 8JR (Nearest tubes Kings Cross or Chancery Lane, buses 46,45,17)

All welcome as we discuss the relevance of these cases t the fight against imperialism.

See our website for further details of our events and join us to demand the immediate release of all the Cuban 5, their return to Cuba and victory against US imperialism and the US blockade.