Cuba, the blockade and the struggle for housing 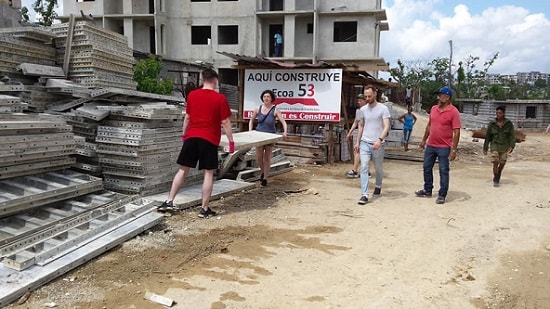 Our brigade volunteered at a construction site in Guanabacoa, Havana that was working to rebuild over 8,000 homes destroyed by a tornado in January. Astoundingly, by the time of our visit in April, over 80% of the homes had already been rebuilt and the aim is to complete the rebuilding process by November! Where is the equivalent process for Grenfell? Plans for the new homes were made by the Ministry of construction in consultation with the community. Volunteer labour brigades are guided and trained by professional workers whilst municipalities are supported to produce whatever building materials they can. We saw first-hand, how recovered materials were being reused in building, whilst other workers produced cement.

The blockade and historic technical underdevelopment make building housing in Cuba expensive and labour intensive. Even basic materials can be three or four times the cost and large tools and machinery are almost impossible to come by. If it were to be imported, concrete, steel, glass and any machinery would have to be shipped from major trading partners like China; this alone adds to the costs in logistics. It would be much cheaper to buy materials from their close neighbour, the US. But the complex legal and trade restrictions that make up the US blockade against Cuba, and the patrolling US naval ships and transaction surveillance that enforce it, prevent any such trade. The US government has never forgiven the Cuban revolution for taking back their property from imperialism, for constructing socialism 90 miles off its shores. And so they seek to frustrate the development of Cuban socialism which since the revolution in 1959 has fought to address inherited housing shortages and infrastructure deficits. The US is determined to reimpose control in its ‘backyard’ by keeping recipients of its finance capital as monocrop, super-exploited and economically crippled nations. The recent tightening of the US blockade against Cuba and the escalation in hostile rhetoric from the US State department is testimony to this.

Over time Cuba's housing infrastructure has begun to crumble, In Havana, centuries old buildings either partially or totally collapse every week. So, although the government ensures no-one is left homeless, some Cubans, especially in Havana, live in crowded conditions. Added to this is the impact of extreme weather events like hurricanes, regularly destroying homes. However, our brigade was able to see how work is undertaken at both a grassroots and state level to address the issue, even with the intensification of the illegal US blockade which already costs Cuba a criminal $12 million each and every day. Despite restricted access to high-tech tools and materials, Cuba’s national house building programme aims to build up one house per municipality per month. 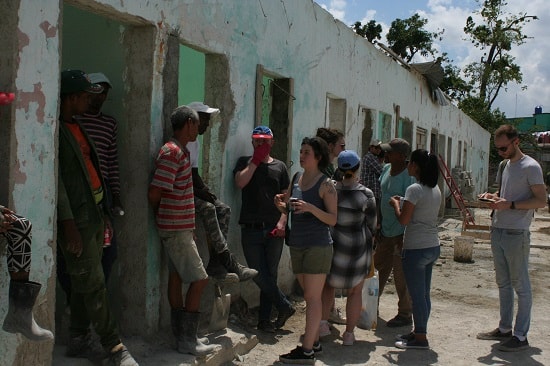 Brigadistas interview construction workers at a site where homes damaged by the tornado in Jantuary 2019 are being repaired and upgraded.

Teresa also pointed out the strength of socialist organisation in rebuilding. A lot of housing was destroyed by natural disasters in the past few years, including several hurricanes and a rare tornado that hit Havana in January. ‘With the effects of the tornado, we have grown and we have made it possible to build more homes. Right now, we are talking about all the people who lost their homes earlier this year. 83% of the cases have already been solved.’ This achievement is highlighted when compared to nearby Puerto Rico which was similarly affected by adverse weather. Bloomberg reported that as of March only 67% of reconstruction projects are even underway. And their government is having to struggle for every cent it can get from the US.

On a macro-economic level, the state has been working to renegotiate and clear old debts since the introduction of new economic guidelines in 2011. This will give them a better position to encourage favourable foreign direct investment (FDI) that will be aimed at raising living standards. The full implementation of the US blockade’s Helms Burton act Elements is specifically geared to frighten away this type of investment.

Nevertheless, some investment projects are underway, including 20 new plants that will produce LC3, low carbon cement. These plants will largely be imported from Portugal but will be the only ones in the world to exclusively produce this type of more environmentally sustainable cement. The process of making this cement produces 35% less carbon dioxide and is also 15% cheaper, according to Dr José Fernando Martirena Hernández from the Central University of Las Villas.

These investments are then being used to increase local production and reduce costly imports. There are plans underway to create 230 mini plants to serve residents in Cuba’s 230 neighbourhood People's Councils. Development plans will be supported through geological research and geo-chemical mapping being conducted with help from China's geological service, helping the island utilise its mineral resources and map variables that will aid it with agricultural production and environmental protection. Additionally, Russian made train wagons will help distribute these locally produced resources around the country. Russia and China of course have their own economic interests, but the Cuban government is working hard to ensure favourable terms for their people. All this will help the Cuban people achieve their goal of reducing the housing deficit.

Volunteer labour in Cuba's socialist housing construction has a proud but complex history. In the 1960s to mid-1970s 'micro-brigades' were a popular form of housing construction. Organised workers would plan to build with state purchased materials. Remaining workers would help maintain production levels. But building knowledge and skills had no way to be built up or maintained between different brigades. In the 1980s a more centralised, standardised approach from the Ministry of Construction was preferred. This did see rapid construction, but also led to types of prefab housing that wasn't appropriate, especially in rural regions.

So on the construction site it was inspiring to see a process that made use of skilled labour of the Ministry of Construction, in consultation with the community and enabling them to take part in the rebuilding of their homes. This is a great example of what can be achieved with a close relationship between the mass of people and the socialist state they control. In April 2018, the newspaper of the Cuban Communist Party, Granma, applauded the people of Baracoa, Guantanamo since 77% of the 3,600 homes that had been repaired there were fixed by residents and people from surrounding areas.

Housing in Cuba is a right not a commodity. Participatory democracy, decentralised municipal control and utilising the productive power of the community are central to the house building programme. Imagine what Cuba could do if the blockade were lifted. Or what we could do here with an empowered working-class directing housing policy!