Violence in Venezuela: The Myths Versus Facts 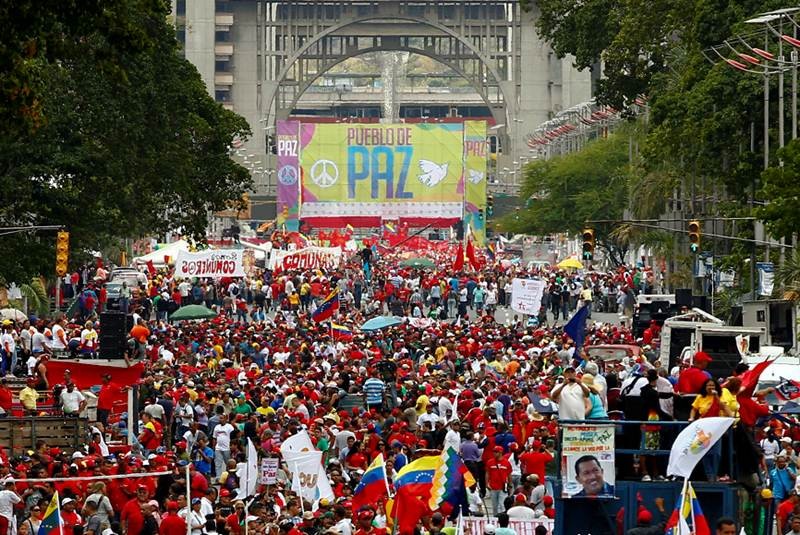 Is recent unrest in Venezuela due to government repression against peaceful protests?

No. This version of events, widely disseminated by the media, ignores the fact that security forces only acted after groups within the protests initiated violent actions. In the case of the first of the current round of protests that gained media attention, in Tachira on February 6, police only moved in after small groups of protesters attacked local governorship offices and home of the local governor.http://www.eluniversal.com/nacional-y-politica/140206/maduro-quieren-apl...

When protests took place in Merida the next day, security forces intervened only after armed protesters had carried out actions such as hijacking trucks carrying food and medicine.http://www.eluniversal.com/nacional-y-politica/140207/herido-estudiante-...

During protests in Caracas on February 12, which gained international media attention due to deaths on the day, there is clear evidence security forces only moved into action after a small group of protesters had them, destroyed the attorney-general’s office and burned five police trucks.http://www.elsoldemargarita.com.ve/posts/post/id:128117

None of this is to deny there were incidents of heavy-handed action by security forces, or to excuse the death of protesters. One fact the media has studious ignored is that 11 members of Venezuela’s security forces and three Bolivarian National Guard soldiers have been arrested and charged after evidence of wrongdoing.

In relation to the two deaths on February 12 (an opposition student and government supporter), eight SEBIN (intelligence) officers who violated strict orders to not confront protesters were arrested. The head of SEBIN has been replaced.http://www.ultimasnoticias.com.ve/noticias/actualidad/sucesos/ocho-funci...

The pattern is clear: small groups of protesters have consciously tried to incite violence and provoke security forces.

The pattern is all the more obvious when we look at the death toll.

As of March 5, there had been 19 deaths that could be directly attributed to the protests. Of these, three have been attributed to state security forces (including that of a government supporter). http://www.cepr.net/index.php/blogs/the-americas-blog/venezuela-who-are-...

In comparison, opposition protesters have shot death two National Guard soldiers and a brother of a national assembly deputy.

A further six have been killed as a result of the opposition road blockades (including two motorbike riders nearly decapitated by barbed wire strung across roadways by protesters).

At least 30 people have indirectly died due to the roadblocks blocking access to emergency medical treatment or other vital services.

It is important to recall that far-right opposition force have continuous used violence against pro-government supporters. In the wake of presidential elections in April last year, 11 people — all government supporters — were killed during days of violent protest. None received the media coverage we see today.

Are these protests in response to legitimate grievances?

Not even President Nicolas Maduro’s government denies Venezuela faces crucial challenges regarding crime and the economy. But it is clear these protests have been organised by right-wing forces who, unable to defeat socialist candidates in elections, are seeking to depose the government via violent means.

Just two months before the recent unrest began, pro-government candidates won 54% of the vote in nation-wide municipal elections recognised as legitimate by the opposition. http://www.americaeconomia.com/analisis-opinion/elecciones-municipales-e...

That is why key opposition leaders, such as Leopoldo Lopez from the Popular Will party, have said repeatedly that the only way to get rid of Maduro’s government is via the streets. http://www.eluniversal.com/nacional-y-politica/140124/dirigentes-invitan...

On February 2, four days before the student protests began in Tachira, Lopez and the opposition-aligned student federation president at the Central University of Venezuela held a public rally.

Lopez called for opposition supporters to take to the streets of Caracas on February 12, National Youth Day, by saying: “The problem is not just Maduro, it is the heads of all the public powers … all of the have to go”. http://www.laverdad.com/politica/45606-la-oposicion-retoma-las-calles-co...

With this in mind, student leaders aligned with Popular Will instigated protests on February 4 in Tachira. They provoked confrontations with police and used images of “repression” to build momentum for the February 12 rally.

Far from being spontaneous protests over social or economic issues, these protests represented a bid by opposition forces to by-pass the democratic process to bring down the elected government.

Who is Leopoldo Lopez?

Lopez is a former mayor of Chacao, a municipality that covers some of the wealthiest suburbs of Caracas and where most of the recent protests have taken place. As mayor, he actively supported the 2002 military coup that briefly ousted president Hugo Chavez and led the arrest of then-interior minister Ramon Rodriguez Chacin. http://www.npr.org/blogs/thetwo-way/2014/02/20/280207441/5-things-to-kno...

Lopez was found guilty of charges of corruption dating back to his time as an employee of the state oil company PDVSA, when he siphoned money towards starting up a new political party.

Despite this, it is clear Lopez and other opposition figures have received financial support from the US to help their campaign to get rid of first Chavez and now Maduro.

US embassy cables made public by WikiLeaks describe Lopez as “a divisive figure within the opposition … He is often described as arrogant, vindictive, and power-hungry …” http://www.cablegatesearch.net/cable.php?id=09CARACAS1408&q=leopoldo-lopez

Nevertheless, the cables reveal a concerted campaign by Washington to promote and maintain unity among opposition spokespeople, including Lopez. http://venezuelanalysis.com/analysis/10388

Embassy cables also reveal US government funding of opposition parties, including Lopez’s. Just this year, the US government earmarked a further US$5 million towards opposition groups. http://www.wikileaks.org/plusd/cables/04CARACAS2224_a.html

Does the Venezuela government control all the media?

No. More than 70% of the media in Venezuela is privately owned, with 25% being in community hands and only about 5% being controlled by the state. http://www.bbc.co.uk/news/world-latin-america-19368807

Almost all private media have shown bias towards the opposition. A study of the three main private TV stations conducted by the Carter Centre during the 2013 presidential elections, found they dedicated 79% of their election coverage to opposition candidate Capriles.https://www.cartercenter.org/news/pr/venezuela-070313.html

These same media outlets have ran constant coverage of the recent protests and statements made by opposition leaders.http://www.cepr.net/index.php/blogs/the-americas-blog/does-venezuelan-te...

There have been many cases of media outlets deliberately misreporting what is occurring in Venezuela. One example is the continued misrepresentation of media ownership in Venezuela. http://www.fair.org/blog/2014/02/27/nyt-corrects-venezuela-tv-falsehood/

The more brazen example is the continued claim by media outlets in Venezuela and internationally (such as El Universal and the New York Times , to give two examples) that a young man was killed as a result of police actions in Tachira.
http://www.eluniversal.com/nacional-y-politica/140228/fallecidos-durante...
http://www.nytimes.com/2014/02/25/world/americas/in-venezuela-middle-cla...

This is despite video evidence showing that he had fallen off a building. No correction has been issued by any of these outlets.http://venezuelanalysis.com/news/10410

But is the Maduro government is a dictatorship? How is it possible to bring him down if not via street protests?

Maduro is democratically elected. The political movement he represents has won 17 out of 18 national elections since Chavez was first elected in 1998.

Despite some opposition claims, Venezuela’s electoral system has been described by former US president Jimmy Carter, whose Cater Center observes elections in many countries, as “the best in the world”. http://www.youtube.com/watch?v=fBwQ40TtCFA

Since October 2012 alone, Venezuelans have gone to the polls four times. Each time the election results have been verified by numerous international election observer teams.

Opposition forces claimed fraud after Maduro narrowly won elections last April, but no actual evidence of fraud was ever presented. A recount demonstrated the results were accurate. Moreover, opposition candidates made no complaints when the same voting system was used in the December municipal council elections.

What elections have repeatedly shown is that the “Chavista” movement remains the largest political force in the country.

It is precisely because the right-wing opposition has failed to win elections that they have turned towards violence, just as they did in 2002 with the failed coup against Chavez.

Protests to bring down an illegitimate government is one thing. Violent protests aimed at imposing a government against the will of the majority are another.

How serious is the economic crisis facing the country?

Few, least of all the Maduro government, deny Venezuela is facing some serious economic problems. However, they are nothing like what the private media portrays.

Last June, the UN Food and Agriculture Organization praised Venezuela for making great strides in lowering malnutrition. Venezuela’s daily rate of calories consumption per person is almost 60% above the FAO’s proposed minimum intake (3182 calories per day in Venezuela, as compared to 1800 calories). http://www.rlc.fao.org/es/paises/venezuela/noticias/venezuela-sera-recon...

Last year, inflation was a very high 56, compared with 23.4% average during the time of Chavez’s presidency (1999-2012). But inflation is not a new problem in Venezuela.

Media outlets have not noted that in the decade prior to Chavez’s elections, the average inflation rate was 52%, with peaks of 81% (1989) and 103% (1996). http://www.elmundo.com.ve/firmas/blagdimir-labrador/la-inflacion-en-vene...

These and many other figures indicate that the picture is far more complex than media portrayals suggest.

Rather than shed light on the situation, the media prefers to highlight selective facts and blame the government for problems. This enables the media to accomplish two things.

First, it conceals the real role that Venezuela’s rich elites are playing in provoking economic problems. In November last year, the Venezuelan government carried out an audit of thousands of private-owned stores and found almost all of them were involved in marking-up prices by 500%-10,000%.

Since then, the government has enacted a new law that would set a 15%-30% limit on profit margins. This law came into effect around the same time the recent unrest began.

Second, the media’s role is to reinforce the idea that any attempt to change the status quo will result in disaster.

From his first days in office, Chavez was vilified by the media and opposed by the elite. They rejected his proposal that the Venezuelan state should control the country’s oil riches and redistribute its wealth n order to more equitably.

Such policies led to a dramatic fall in poverty and contributed to record economic growth rates. It funded a huge expansion of free, accessible public services (health, education, etc) and community empowerment via funding for grassroots neighbourhood committees.

This is why the Maduro government continues to enjoy popular support — as shown in elections and large pro-government demonstrations.

This is also why the rich elites, and the media outlets they own, are continuously working to bring down the government. Part of this campaign involves discrediting the very idea that people’s needs could take priority over the market.

That is also why it’s not a question of defending a government versus protesters. It’s about defending a political movement of the poor against the violent reaction of the old elites.