Published on 6 March 2015 by www.venezuelanalysis.com 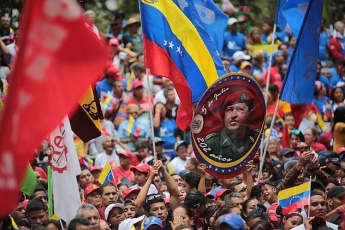 Thousands of Venezuelans gathered in the Plaza Bolívar in the center of Caracas yesterday to commemorate the second anniversary of the death of late president Hugo Rafael Chávez Frías with an 'Anti-Imperialist Peoples' Court.'

Although the occasion was solemn, the mood was joyous, as innumerable red-clothed bodies celebrated with smiles, laughter, and boisterous chants the life and legacy of the leader they call the 'Eternal Comandante.'

As thousands assembled beside the statue of Simon Bolívar, the public square echoed with cries of "Chávez lives, the struggle goes on."

"I'm here for the commemoration of the giant of Latin America and the world, the great Hugo Chávez Frias, who raised the banner of Bolívar and the Latin American nations. I'm from Colombia, I've lived in Venezuela 39 years, but I feel revolutionary at heart, because my first vote was for Hugo Chávez, and I'll keep voting for the Venezuelan Revolution. "

The late Venezuelan leader also touched the hearts of a generation of young people born during the Revolution.

"We've liberated ourselves thanks to Hugo Rafael Chávez Frías, who wasn't just a president, but a father, a friend, he was someone who woke us up," affirms Nody Borgés, 21, a student of Agroecology at the Bolivarian University, one of the thirteen universities created under Chávez.

At approximately 2 pm, the President of the Republic Nicolas Maduro arrived at the plaza to inaugurate an "anti-imperialist peoples' court" in honor of the late Comandante, who was renowned for his fierce rejection of neo-colonialism in Latin America and around the world.

"Chávez left us a giant legacy. Never before did a leader succeed in perfectly embodying, as did Chávez, the historic ideals of Bolívar, of the whole nation, of 500 years of resistance," the Venezuelan Head of State declared.

The peoples' court was organized to examine evidence of a coup plot uncovered in February meaning to topple the Maduro government, a threat which the Venezuelan Supreme Court has not officially recognized. The practice began after the 2002 coup against Chavez himself, which was classified as a simple "void" in leadership by the country's conservative Supreme Court.

Maduro, who has repeatedly accused the US of having a hand in February's thwarted coup, took the stage on Thursday to reiterate his defiant stance.

The sentiment was echoed in shouts of approval from the crowd gathered.

"It's contradictory for Obama to say that he wants peace, and then intervene in the political processes of other sovereign countries when in his own country, they discriminate against Black people, they violate human rights, they support war, what's happening in Palestine."

This view is shared by 62% of Venezuelans, who according to a poll by Hinterlaces, believe that the U.S. should not be permitted to release statements concerning Venezuela's internal affairs. The White House issued 103 such statements critical of Venezuela in 2014 and already 65 in the first two months of 2015.

The thousands of Venezuelans present at the rally were also joined by several dozen international delegates, including a contingent of Palestinian medical students currently studying at the Salvador Allende Medical School, thanks to scholarships awarded by the Venezuelan government under Hugo Chávez.

"The legacy of Hugo Chávez [...] our Revolution. His Revolution is our Revolution, against imperialism. The empire has caused us a lot of pain, to the poor people. But Hugo Chávez stood against all of this, he made a revolution for these people who also deserve to live. The Venezuelans and Palestinians are together in one struggle against imperialism," explained Muhammad Ghazi, 24, who hails from Nablus in the occupied West Bank.

Although Hugo Chávez was not physically present, his ardent spirit was felt across the length of Plaza Bolivar.

"The Yankees want to come here to Venezuela and take control of the oil that Chávez liberated [...]" Alwaneza told venezuelanalysis.com. "And they're not going to succeed, because the people are here on their feet, and at 51 years old, I feel that I have the courage to stand up and face the situation presented."