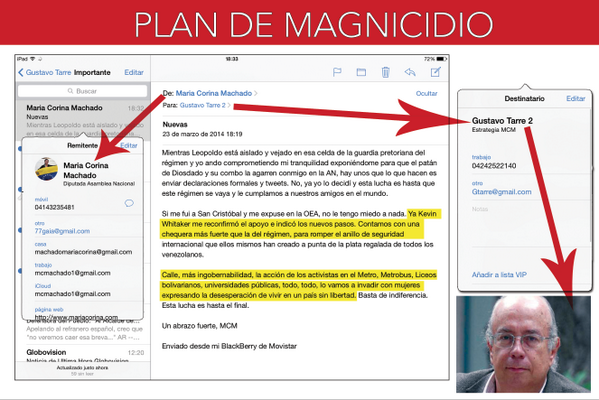 In March, Machado began to petition for foreign intervention against Venezuela in numerous press conferences from Washington to Brasilia. She has asked for similar interference by the Organization of American States (OAS) and the European Union, on the grounds that the Maduro government is committing “severe crimes against humanity” regarding its treatment of anti-government protestors.

In a May 23rd email, Machado reportedly complained that the international strategy was not working, because it was “taking too long.” The email read; “I’m fed up with waiting. We have to take out this trash- starting with the one heading it and by taking advantage of the world situation with Ukraine and Thailand as soon as possible.”

The message was sent to former Venezuelan diplomat Diego Arria, once a member of the pro-U.S. conservative government that preceded Hugo Chavez, known as the Fourth Republic.

In correspondence with Gustavo Tarre Briceño, former leader of the right-wing Social Christian Party (COPEI), Machado cited the US ambassador to Colombia as an ally.

“[Ambassador] Kevin Whitaker has already reconfirmed his support and he pointed out the new steps.” When it comes to “breaking international security,” she said “We have a bigger checkbook than the government … thanks to their giving away Venezuelan peoples’ money like presents.”

Mayor Rodriguez publicly called upon the U.S. government to clarify whether it was aware of Whitaker's contacts or if the official encouraged Machado of his own.

In the same email Machado touted her own importance by claiming that hardline opposition ally, the imprisoned Leopoldo Lopez, was “isolated and humiliated.” Other politicians, she said, are just sending formal statements and tweets, while she is “exposing herself” and intends to “struggle until the end.”

Her plans for struggle rely on continued street action, and “ungovernable activist action in the subway, Metrobus, Bolivarian high schools, public universities, and everywhere... We will invade everywhere with women expressing despair at living in a country with no freedom.”

Mayor Rodriguez released additional emails that pointed to the involvement of a number of other people in the plot. They include former US ambassador in Venezuela, William Brownfield, former exterior director of PDVSA Pedro Mario Burelli (now based in Washington), house deputy and ex-governor of Carabobo state Henrique Salas Romer, and numerous self-exiled Venezuelan businessmen, some of whom left to avoid arrest for fraud charges, or arrest for previous coup attempts, such as Eligio Cedeño and Robert Alonso.

At first, Machado denied she wrote the emails. Still maintaining that position, she later pressed charges against the government for unlawful spying, slander, violation of civil liberties and for the framing her for treason.

Although Venezuelan law requires that no information procured by security agencies may be released to the general public, Ortega said the data in question is a matter of national security, and therefore must be treated differently.

“We cannot continue unaware of an attempt on the stability and peace of this country,” Diaz said.

Ramon Aveledo, spokesperson for opposition alliance, Democratic Unity Roundtable (MUD), challenged the validity of the accusations, asking “How are we to know if these emails are true or false?”

“Although yesterday’s announcement was more of a farce than an operetta, the theatrical setting was equally appropriate for such a spectacle,” said Aveledo, referring to Rodriguez’s announcement, which took place in Caracas’ National Theater.

Meanwhile Maduro extended his gratitude to the “Twenty governors and 255 mayors who today formally rejected the plan for my assassination.”

Venezuelan Foreign Minister Elias Jaua noted the parallels between the crisis in Ukraine and the protests and Venezuela,  “The United States’ plan to isolate and manipulate Russia… and Venezuela will not succeed, given that the US government no longer has the capacity to determine the fate of the majority of the world’s countries.”

Jaua took a similar stance in response to the sanctions approved by the United States Senate on Wednesday.

“They are completely illegal,” he emphasized yesterday to reporters, while on a diplomatic visit to Moscow. “There is nothing in international law that authorizes the US government and its legislature to employ unilateral sanctions, the only body authorized to so is the Security Council of the United Nations.”

However, the significance of the measures, which include frozen assets and US travel bans for select Venezuelans, are more symbolic than anything else, said Jaua. “These are psychological messages they [the US government] try to send to countries that have taken a path toward independence, toward sovereignty, toward self-determination.”

He recalled the vision of democracy that inspired late Venezuelan leader Hugo Chavez, entailing; “a balanced world, with many poles of power, so that nobody can exercise imperial hegemony over another, as the United States still believes it employs.”