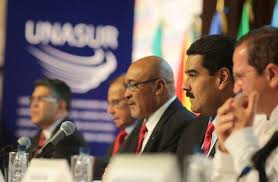 At the end of the five hour session it was proposed that the government and opposition meet again next Tuesday. Maduro designated his vice president, Jorge Arreaza, foreign minister Elias Jaua, and mayor of Caracas Jorge Rodriguez as points of contact with the opposition to prepare the meeting’s agenda.

Protests, riots and street barricades began in early February after a hard-line sector of the opposition called for a strategy of government resistance called “The Exit”. Protests were lead by Machado, Ledezma, and Leopoldo Lopez, the latter now in jail and under investigation for incitement to violence.

Other peaceful protests were organized by mainly middle class opposition supporters and students, citing a list of problems such as high crime, shortages and inflation.

Forty people have been killed in the political violence that has occurred since the protests began, including opposition activists, government supporters, other civilians and National Guard officers.

President Maduro repeatedly called for dialogue during this time, however only a few moderate opposition politicians attended “Peace Conference” talks that saw the participation of business, religious, and other groups.

However recent visits from a delegation of the Union of South American Nations (UNASUR), of which Venezuela is a member, laid the groundwork for a fresh round of talks, which the MUD has now decided to participate in.

In his opening speech at yesterday’s meeting, Maduro spoke of the importance of conducting politics within the framework of the constitution and without resorting to violence to achieve political aims. As such, the president requested that all government and opposition figures issue a joint rejection of the violence.

Maduro called upon the sectors of the opposition that support “The Exit” to reflect, admitting that when the unrest began the government had “underestimated” the hard-line opposition’s strategy.

“If we had been weak and the street barricades had ousted us, who were you going to put in my place? Is violence the way? No one would win anything with this path, we’d all lose,” stated Maduro.

The president also argued that while “like any other country” Venezuela has problems, these cannot be used to justify the violence and other anti-democratic actions.

Elias Jaua, foreign minister, argued that dialogue and co-existence depended on the opposition recognising the government’s legitimacy and the results of elections. “We should begin from the recognition of the people’s will,” he said, in reference to the opposition’s rejection of the April 2013 presidential election results, when Maduro won with 50.61% of the vote.

Government officials also spoke of the changes that Chavismo had brought to Venezuela, such as a sharp reduction in poverty and the promotion of a more participatory democratic system.

Citing violence by presumed opposition militants such as the destruction of a public university faculty and the firebombing of the housing ministry offices and kindergarten, the president argued that “peace with justice” was necessary.

Speaking for the opposition, MUD secretary Ramon Aveledo issued his personal rejection of the violence, however argued that pro-government vigilante groups must be investigated.

In a criticism of the country’s political polarisation, the opposition representative said it was “worrying” that dialogue between the government and opposition should be “extraordinary news” in Venezuela and not “a perfectly normal event”.

Aveledo also mentioned a range of opposition grievances, including the need to replace Supreme Court and electoral council officials with expired terms of office, and for the release of what the opposition calls “political prisoners”, which include Leopoldo Lopez.

Finally, he said the opposition planned to talk about crime and economic problems during the talks.

Opposition leader and former presidential candidate Henrique Capriles meanwhile argued that the country was in a “very critical situation” and asked Maduro to “respect” the opposition.

Directly addressing Maduro, the state governor said, “While you’re in that [presidential] seat you have to respect and recognise Venezuelans; now, if you don’t want that seat, say so”.

However Capriles also committed himself to attending further talks, stating that, “If there’s going to be work for our people’s security, I’m going to be there”.

The decision to hold the talk was widely welcomed internationally, from the Carter Centre to the Vatican. After the session, Ecuadorian foreign minister Ricardo Patiño said that the meeting had been “very positive”.

“Differences were clearly shown but all showed a willingness to advance in the peace process and find solutions to structural problems,” he said to press.

The meeting came on the same day that private Venezuelan polling firm Hinterlaces released the findings of its latest national survey of citizen opinion.

According to the poll, 51% of Venezuelans approve of the Maduro administration, versus 48% who do not, suggesting that the president enjoys the same level of support as when he was elected in April last year.

Further, 52% of Venezuelans believe the government has the capacity to resolve the country’s main problem (cited as the economy), versus 46% who don’t agree with this statement.

In terms of the recent unrest, 85% of Venezuelans reject “violent protests and street barricades” and 87% want the perpetrators of these actions to be punished.

79% of Venezuelans support the mediation of the Pope in the conflict, arguing that this would be effective in resolving the dispute.