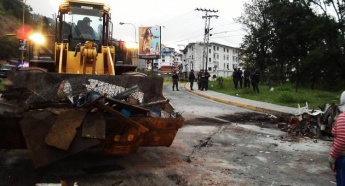 Another agreement which is advancing is the replacement of 11 Supreme Court (TSJ) judges and 3 National Electoral Council (CNE) rectors whose terms of office have expired. New appointments will be nominated by a parliamentary committee which will have both government and opposition representatives. The nominations will then need to be approved by a two-thirds majority in the National Assembly.

Some radical opposition groupings are boycotting the process. The Project Venezuela party, which has 3 of the opposition’s 66 National Assembly seats, has said it doesn’t want to “legitimise totalitarianism”.

There are areas where the government and opposition have not reached agreement in the dialogue sessions, which began earlier this month after the Union of South American Nations (UNASUR) laid the groundwork for the opposition to agree to peace talks.

The opposition has been pushing for an amnesty law for what it terms “political” prisoners and exiles. A key case is that of Ivan Simonovis, the former head of the Caracas police who was convicted in 2009 for his role in civilian killings during the opposition’s short-lived coup attempt in 2002. The opposition maintains that Simonovis is innocent.

While it was agreed to form a medical commission to evaluate Simonovis’ current state of health, Maduro last night rejected the idea of amnesty for Simonovis and similar figures.

“The opposition insists that we free the person who directed the killings. A fair trial was conducted with the right to defence…and there are the recordings of when he [Simonovis] gave the orders to fire,” said Maduro last night, while also reminding the country that 19 people had died and many were wounded in the events leading up to the coup.

Members of the Organisation of Victims of 11 April 2002 also participated in the dialogue meeting last night, and likewise rejected the idea of an amnesty law for figures such as Simonovis.

“We don’t believe in an amnesty law…we can’t accept any law that leads to impunity,” said Edgar Marquez, a university professor and spokesperson for the victims group.

Nevertheless both the government and the moderate opposition remain committed to the talks, with MUD spokesperson Ramon Aveledo saying that dialogue is necessary.

“In today’s meeting both sides coincided in the need to generate results. Dialogue is the legitimate and democratic way between people with different opinions…we need to advance more quickly,” he told the press last night.

However the radical wing of the opposition continues to call for protests and street activity, has rejected the talks and criticised more moderate opposition figures for taking part in them.

The unrest began in early February after right-wing leaders Maria Corina Machado and Leopoldo Lopez called for resistance to the government in a strategy called “The Exit”.

The opposition protest movement that then emerged was marked by both peaceful demonstrations around problems such as high crime and inflation, and a violent strategy of street barricades in an effort to force President Maduro’s resignation. 41 have been killed and hundreds wounded so far, with the majority of deaths apparently linked to the street barricades.

Meanwhile the president’s approval rating has remained above 50% according to a recent poll. According to another poll, 90% of Venezuelans support the dialogue between the government and opposition as a means to end the current political conflict.

Yesterday Venezuelan armed forces and police dismantled the majority of remaining barricades in the Andean city of Mérida, one of the focal points of the unrest. The barricades had shut off schools, universities, medical centres, supermarkets and the main bus terminal. All four of the deaths to occur in the city during the unrest also appear linked to the barricades.

Nearly two thousand officers and hundreds of volunteers were involved in the operation, while residents clapped the effort on. A few local residents were also filmed holding up placards in opposition to the action.

Mérida is one of the last urban areas still affected by the barricades, which at their peak affected the functioning of normal life in up to eight Venezuelan cities.

Army and police units will maintain a deployment in the city in the coming days to prevent the barricades from being re-erected.

The Venezuelan president also accused the opposition of having “tried to sabotage my first year in government every day…without truce,” but described the previous year as one of “permanent work with the people”.