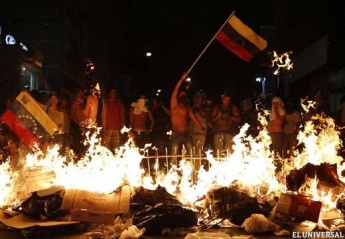 As we reported in FRFI 236 (www.revolutionarycommunist.org/index.php/latin-america/3238-venezuela-economic-battlelines-are-drawn-in-run-up-to-elections), failed opposition presidential candidate Henrique Capriles tried to use the December municipal elections as a plebiscite against President Maduro's Bolivarian government, unleashing an economic war that saw hoarding and speculation by the ruling class translate into shortages and inflation for the majority. In the election itself, the opposition were roundly defeated as the United Socialist Party of Venezuela (PSUV) took 54% of the popular vote and won 76% of the contested positions.

Since the new year, key opposition leaders like Leopold Lopez of the powerful Mendoza Group business conglomerate have made calls to ‘go out into the street’' in order to achieve the ‘exit’ of the Maduro government. In recent weeks opposition students, particularly from the elite Universities of the Andes in Merida, have staged several violent protests with no purpose other than to cause injury and provoke disruption. Opposition students have often been at the centre of reaction in Venezuela in the past and have benefited from considerable funds from organisations like USAID. The ‘manos blancos’ (white hands) protests in 2010 were a key part of this strategy
(see www.revolutionarycommunist.org/index.php/latin-america/1709-the-real-bolivarian-youth).

Denouncing the violence, President Maduro said that around 200 violent thugs had been involved in the attack on Miraflores Palace after hitting the Attorney General's office. He concluded: ‘In Venezuela, we are confronting a Nazi-Fascist resurgence, and we are going to defeat it. There will not be another coup in Venezuela ... we will secure democracy and secure the revolution for the whole world to know.’

Following the disorder, the national security forces have been stationed in Venezuela's principal cities, with organised revolutionaries in communities like Barrio 23 de Enero (23 January) pledging to defend their streets. Attorney General Luisa Ortega Diaz hasissued arrest warrants against Carratu Ivan Molina, head of the military under former President Carlos Andres Perez, and Fernando Gerbasi, a former diplomat. An audio tape of the two discussing ‘opposition plans ... similar to those that occurred on 11 April 2002’ for the Day of Youth celebration suggests involvement in plotting another coup against the Bolivarian Revolution.

Yet again, Venezuela's ruling class, backed and directed by US and European imperialism, is organising to block the progress of the Bolivarian Revolution and the fight for socialism. With further opposition actions planned, the violence may continue in coming days. Follow www.venezuelanalysis.com , www.correodelorinocco.gob.ve andwww.telesurtv.net for more regular updates.

Victory to the Bolivarian Revolution!