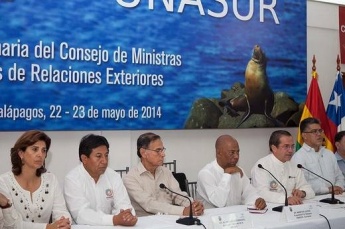 Earlier, during the meeting held on Thursday and Friday, the Unasur foreign ministers received a report from the regional bloc's taskforce mediating in the government-opposition talks in Venezuela, which comprises the foreign ministers of Ecuador, Ricardo Patiño; Brazil, Luiz Alberto Figueiredo, and Colombia, María Ángela Holguín.

Meanwhile, Venezuelan Foreign Minister Elías Jaua said the US initiative has been approved by the Foreign Relations Committee of the Senate to punish "officials who have been leading the restoration of public order and the guaranteeing of peace and stability for the Venezuelan people." Protests and violent unrest in Venezuela over the last three months have left more than 40 people dead.

The targeted officials include military and police officers, governors of Venezuelan states and Venezuela's Attorney General Luisa Ortega Díaz, Jaua said during a press conference at the end of the ministerial meeting.

He added that the US initiative also provides for USD 15 million to fund Venezuelan opposition groups, regardless of "whether they engage in politics peacefully" or act violently.

A recent national opinion poll by private firm Hinterlaces suggested that between 67 – 73% of Venezuelans oppose the proposed U.S. sanctions.