Thousands March in Caracas to Commemorate Fall of Dictator

Published on 24 January by www.venezuelanalysis.com 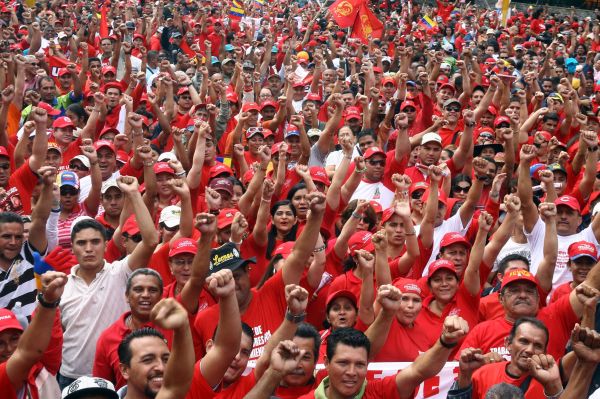 On Friday, thousands took to the streets of the Venezuelan capital to commemorate the 57th anniversary of the toppling of the Pérez Jiménez dictatorship as well as to voice their support for the government of President Nicolás Maduro in the face of economic war and political destabilization.

Setting out in the morning from Plaza Fabricio Ojeda in the historic 23 de Enero neighborhood, a combative barrio itself named after the date of Pérez Jiménez’s ousting, the march concluded in the Plaza O’Leary in El Calvario, where the President spoke and led a spirited rally, amidst a sea of red banners.

Shortages and the “Economic War”

Friday’s march comes in the midst of severe inflation and widespread shortages of basic goods, which President Maduro has termed an “economic war” that is reportedly being waged against the Bolivarian government by elements of the opposition. The President accused distributors of hoarding everyday products and presented them with an ultimatum to cooperate or face “tough measures.”

In the face of this economic war, to which many attribute the reported drop in President Maduro’s approval ratings to 22%, Yulixa Jiménez, like thousands of others at Friday’s march, remains defiant.

“We as a revolutionary people are conscious of what the Right is doing to us, because it’s part of their fascist plan,” says the 20-year old student at the Bolivarian University of Venezuela. “We have to be conscious of what is happening, and we have to advance in the struggle to produce our own products and not depend so much on income from oil.”

Carlos Martínez, 30, of La Parroquía Sucre, similarly notes the gravity of the current political and economic situation: “The economic war is affecting us. This is a small group of bourgeois who control the economic market of the country. It’s a real monster we’re fighting. we want to make it so the people can produce our own resources and we don’t depend on the monopolies.”

Despite these immense challenges, many like Francine Montorola are nevertheless optimistic: “We are conscious that we are at war, but we’re going to come out victorious,” she said. “We know who our enemies are, and we are organizing ourselves and struggling to come out of this. These are difficult moments, but no one said people’s struggle was easy.”

These responses to the economic war are met by freshly uncovered evidence of its depth and scope. While thousands marched through the streets on Friday, Caracas police discovered in Catia a cache of 33 tons of household products, including rice, diapers, dishwash soap, mayonnaise, tooth paste, deodorant, among other everyday items.

Commemorating the Fall of the Dictatorship and the Martyrs of Democracy

The 23rd of January is an historic date in which Venezuelans annually take to the streets to honor those fallen in the struggle against the Péres Jiménez dictatorship. However, for the thousands assembled in El Calvario on Friday, the 23rd of January is also a date which commemorates the  more than 5000 revolutionaries assassinated by the governments that succeeded Pérez Jiménez during Venezuela’s 40-year long era of “pacted democracy,” known as the Fourth Republic, which only came to a close with Hugo Chávez’s election in 1998. A significant proportion of these political killings occurred during the 1989 rebellion by the popular classes against neoliberal austerity measures, known as the Caracazo, in which as many as 3,000 people were gunned down by the Venezuelan army.

Nonetheless, for those attending Friday’s march, this commemoration is anything but merely historical, but, on the contrary, has real implications for the present conjuncture. For Antonia Díaz, 40, the stakes are high: “If we allow this revolution to be lost, the same people [in power] during those years [of dictatorship] will come after us, the people, of Chávez…We will defend this process to the death.”

According to PSUV (United Socialist Party of Venezuela) youth leader Brian Mirandés, 21, the danger of returning to this not-so-distant past of brutal state repression is hardly abstract:

“In the past, many comrades died as a consequence of the repression of the Fourth Republic, comrades disappeared, one of the closest [fallen comrades], that we have now is Robert Serra, with whom I had the opportunity to work alongside, who was assassinated by the Right, by Imperialism.”

In the eyes of the thousands attending Friday’s rally, Robert Serra, the youngest ever National Assembly deputy who was assassinated by Colombian paramilitaries in October at the age of 27, is a symbol both of hope and of what is at stake in the Bolivarian Revolution. President Maduro himself underscored Serra’s inspirational legacy when he proposed that the slain deputy’s mother, Zulay Aguirre, run for her son’s National Assembly seat in the elections this coming December.

In his speech at Friday’s rally, President Nicolás Maduro denounced the visit by Sebastián Piñera, Andrés Pastrana, and Felipe Calderón, the ex-presidents of Chile, Colombia, and Mexico, respectively, who will be attending a forum organized by the Venezuelan opposition on Monday. The Venezuelan leader stated that these ex-presidents’ hands would be “forever stained in blood” in the event of a coup d'état in Venezuela.

The President underscored that the guests of the forum revealed the extreme rightwing character of the Venezuelan opposition, referencing Piñera’s role in the privatization of Chilean education and repression of the struggles by the indigenous Mapuche people as well as Calderón’s responsibility for the disastrous Mexican drug war and links to the drug cartels.