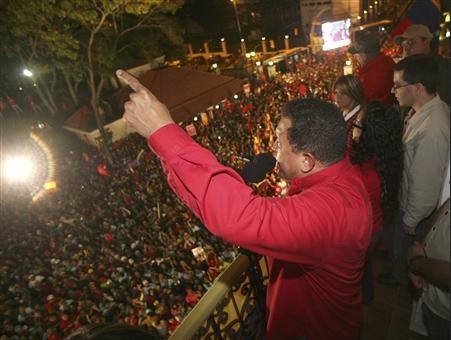 [RCG 06.03.12] The battle to defend Chavez's legacy, and the Venezuelan revolution, has begun. As socialists, communists and progressive anti-imperialists in this country we can not stand by whilst the bourgeois press in Britain - the enemy of any progressive movement - slander and lie about the concrete achievements and developments towards a socialist model in Venezuela and away from capitalist exploitation and misery.
Below is a letter sent by Sam McGill, leading Viva Venezuela and Fight Racism! Fight Imperialism! correspondent, sent to The Independent newspaper to counter the lies spread by David Usbourne (US editor) recent piece Death of Venezuelan President Hugo Chavez leaves tears and a nation divided

How fitting that this utterly reactionary piece dancing on the freshly dead corpse of world renowned and respected President Hugo Chavez is written by David Usborne the US editor of the Independent.
As the director of the website vivavenezuela.co.uk and our 2012 delegation to Venezuela, I urge readers to seek out a more informed perspective on the process in Venezuela.
The fact that Usborne quotes Republican Foreign Affairs committee leader Ed Royce as declaring '"Hugo Chavez was a tyrant who forced the people of Venezuela to live in fear," shows his political allegiances. Of course no mention is made of the series of tyrants who ruled Venezuela in the interests of the US economy, from military dictator Pérez Jiménez who ruled via military junta between 1952 and 1958, nor president Carlos Andrés Pérez, who in response to the 1989 Caracazo uprisings against IMF imposed austerity measures, unleashed the full force of the army and police force to assassinate between 300-3000 citizens in the most impoverished barrios of Caracas.
Nor is any mention made of the tyrants who have governed from the White House during Hugo Chavez's presidency who are responsible for sending in US troops to Afghanistan and Iraq, presided over drone attacks in Libya, Pakistan and Somalia, murdering millions in the Middle East and North Africa. In reality, Hugo Chavez has given his life to improving the lives of ordinary Venezuelans, In the last ten years, Venezuela has achieved the lowest levels of inequality in the region (excluding Cuba); under the presidency of Chavez, it has wiped out illiteracy, brought infant mortality down from 25 per 1,000 to 13 per 1,000 live births, slashed levels of extreme poverty, provided free health care and education for all, built hundreds of thousands of units of social housing and ensured that no child goes to school hungry in the morning.
Chavez built anti-imperialist alliances, first with Cuba and then, through ALBA and other trade and cooperation treaties, more widely across Latin America and the Caribbean, to challenge the hegemony of the United States and begin to create a new anti-imperialist bloc on the world stage. The ALBA alliance has been central to eradicating illiteracy in no less than four countries, providing millions with free cataract operations and providing subsidised oil and funding for infrastructure across the continent. Hardly the actions of a tyrant.
We only have to look to the example of Haiti to understand the very real human impact of Chavez's drive for Latin American development. In stark contrast to centuries of colonialism followed by US-backed coups and exploitation, ALBA has been a beacon of solidarity in Haiti, playing a vital role following the devastating earthquake in 2010. Cuban medical brigades have been working in Haiti since Hurricane George in 1998 and Haitian medical students have been studying on scholarships in Havana’s Latin American School of Medicine since 1999. By 2007, Cuba was providing 75% of Haiti’s health care: infant mortality dropped from 80 per 1,000 live births to 33 and life expectancy increased from 54 to 61 years.
In 2007 Venezuela funded agreements including $80 million for an oil refinery, $56 million for three electricity plants, $4 million for a liquid gas plant, and $3 million for a waste collection programme. Following the earthquake Venezuela cancelled all of Haiti’s $400 million debt with PetroCaribe and pledged $2.4 billion in reconstruction and relief aid. Furthermore, the February 2012 ALBA summit produced a ‘roadmap’ for sustainable reconstruction focusing on building infrastructure and increasing independence in energy, agriculture, health care and education in Haiti.
The distinction couldn’t be clearer. On the one hand we have US-led initiatives in the region, pushing free trade, monopoly capitalism, military bases and sweatshops whilst paying lip-service to development, freedom and democracy. On the other, ALBA and the recently created Community for Latin American and Caribbean States (CELAC) have already demonstrated their outstanding commitment to meeting the needs of people south of the US border.
The Venezuelan people will not allow these vital gains and achievements to be lost and it is clear that the majority not only supported Chavez as a charismatic leader, but actively support and participate in consolidating the policies of his project to build socialism. The tremendous popularity of the governing United Socialist Party of Venezuela (PSUV) was demonstrated again in December’s regional elections, where the party won 20 out of 23 states. Under the stewardship of vice-president Nicolas Maduro and National Assembly leader Diosdado Cabello, Bolivarian revolutionaries in their own right, the Venezuelan government has begun to implement the Programa Patria manifesto on which Chavez was elected.
No wonder that Usborne and his friends in the Republican Party can't wait even one day to undermine the revolutionary legacy of Chavez. They are quaking in their boots as they realise their hopes of the fall of the Bolivarian Revolution will not materialise.......that far from the fate of Venezuela riding on the life and death of Chavez, this has never been about one man.
As my friend and long term community activist Rafael Angulo in La Salinas, Vargas State, Venezuela stated this morning ''Chavez's death, without a doubt overwhelms us with great pain by physical separation but we are happy to have his spiritual presence in the hearts of millions and millions of us Venezuelans, we are grateful for him teaching us the way of relating to each other in order to consolidate this Bolivarian revolution. Lots of love, discipline, passion will continue the path we've been travelling for many years. Chavez lives in each and all of us!
Sam McGill director of solidarity website www.vivavenezuela.co.uk