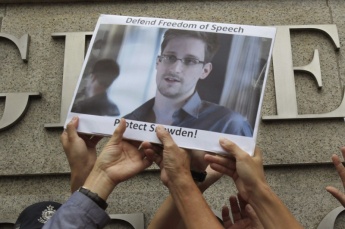 'What would happen if it was discovered that Venezuela, a humble country, were spying on the whole world? All the organisations, the [U.N.] Security Council would come down on Venezuela straight away,' Maduro said.

He emphasised that Ecuador is evaluating possible political asylum for Snowden, and that no one has requested asylum in Venezuelan in relation to the case, but that if they were to do so, 'we would evaluate it as well'.

The Venezuelan president went on to remember the case of Nelson Mandela, 'who was internationally persecuted and characterised as one of the most wanted terrorists by the United States'. On the other hand, he argued, the U.S. government protects 'terrorists' such as Venezuelan Luis Posada Carriles, 'who flew the Cubana de Aviacion plane and killed over 70 people'.

'Who deserves protection, the young Snowden, or those who plant bombs? It’s a reflection that we make to the people of the United States and of the world. We defend [Snowden] because ... the denunciations he has made in a very brave way, serve to change the world,' Maduro said.

Further, he argued that the United States 'should continue to be a great nation, but more for helping the world than for wanting to control it. There needs to be definitive change. The people of the United States agree with their country having a new role in the world and with the denunciations made by Julian Assange and Snowden'.

'No one should spy on anyone,' Maduro concluded.

In August last year the Venezuelan government also supported Ecuador against 'threats' from Britain, after it granted Wikileaks founder Julian Assange diplomatic asylum in the Ecuadorian embassy in London. Venezuela called for Ecuador’s decision to be respected, and criticised the British government’s conduct over the issue.

Moreover, late President Hugo Chavez supported 'the people of Wikileaks', congratulating them in 2010, and saying the documents they leaked showed the U.S. to be a 'failed state that throws overboard all ethical principles and respect for even its own allies'. He said Washington owed 'answers to the world'.