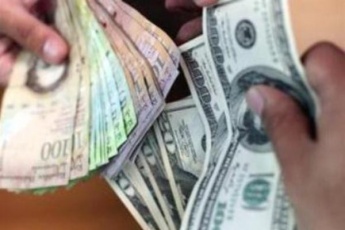 Nevertheless, the importation of goods to Venezuela reduced by 1.4%, mainly due to a decrease in private sector foreign purchases of 12.3%. This was compensated by an increase in public sector imports. Throughout 2014 private companies complained that they were unable to get access to sufficient dollars through currency controls to import the necessary products from abroad to satisfy demand in their respective markets.

The BCV statement cited continuing positive trends in certain social indicators, including that unemployment is at a low of 5.9% and that extreme household poverty measured by Unsatisfied Basic Needs had fallen slightly to 5.4%.

The Venezuelan government argues that the economic problems are due to an “economic war” being waged by hostile business elites, the conservative opposition, and the U.S. government. They cite the violent opposition protests which shut down several Venezuelan cities earlier this year, and widespread practices of contraband, hoarding and price speculation as evidence to support their position.

Critics meanwhile say government economic policy is largely to blame, pointing the finger at distortions created by “strict” foreign currency exchange controls, price controls, and domestic subsidies such as on the sale of gasoline.

In a special press conference at Miraflores presidential palace in Caracas, President Nicolas Maduro said that significant changes to Venezuela’s economic model and currency control regime where being planned for early 2015.

“This recovery program is focused on maintaining social investment and recuperating production. The plan will have three phases, of six months, two years and four years,” Maduro told journalists.

The Venezuelan president said that an increase in the price of domestic gasoline, which is the cheapest in the world and is sold at below production cost, would not be implemented in the short time, as “today it wouldn’t help”. However both the currency control and price control systems are set to be reformed, with details to be announced in early January.

While Maduro underlined the government’s position that an “economic war” was responsible for the situation in the country, mentioning the violent “guarimba” protests and various destabilising economic practices, he also stated that his government had made mistakes which must be corrected.

“It is necessary to rectify the mistakes in models, in management, in the direction of important [nationalised] companies and productive facilities, and in the Venezuelan fields which are in the hands of the Bolivarian revolution. When I say this, I say it with absolute knowledge and responsibility,” he said.

Below, Venezuelanalysis.com prints the seven objectives and eight actions that President Maduro announced as part of the “economic recovery plan” in 2015 and beyond.

1) Perfect the economic and social model of wealth distribution, including optimising investment in social programs, housing and technology.

3) Guarantee the (financial) resources for the real economy. This includes reforming currency controls and importation systems to “optimise” their functioning.

4) Adjust (improve) the efficiency of policies, actions and institutions to neutralise contraband, hoarding and speculation in order to maintain fair prices. Advance in the application of the Fair Prices Law.

5) Forge a wide productive alliance with national and international capital for development in special economic zones.

6) Implement a new productive management model in the occupied and nationalised companies.

7) Activate the Greater Economic Staff body (which brings together top officials from economic policymaking areas) to monitor and implement the recovery plan. The body will operate out of Miraflores presidential palace from 3 January, and will be headed by President Maduro.

Key Actions for the Implementation of the Plan

1) The creation of a new currency exchange system to perfect the servicing of the needs of different economic sectors.

2) Fiscal reform to increase the amount raised in taxes.

3) The streamlining of public spending to reduce “wasteful” or “luxurious” expenses, in order to focus on social spending and productive investment.

4) The strengthening of international reserves, especially the strategic dollar and strategic bolivar funds.

5) The efficient application of the establishment of price controls to ensure “balanced and fair” prices to confront the “economic war”.

6) Initiatives for investment and economic growth in different areas of national production.

7) Initiatives to address the savings and excess liquidity (in bolivars) in the productive sector as an anti-inflationary strategy.

8) The establishment of special economic zones along the Colombian border and oil producing areas to strengthen anti-contraband efforts.