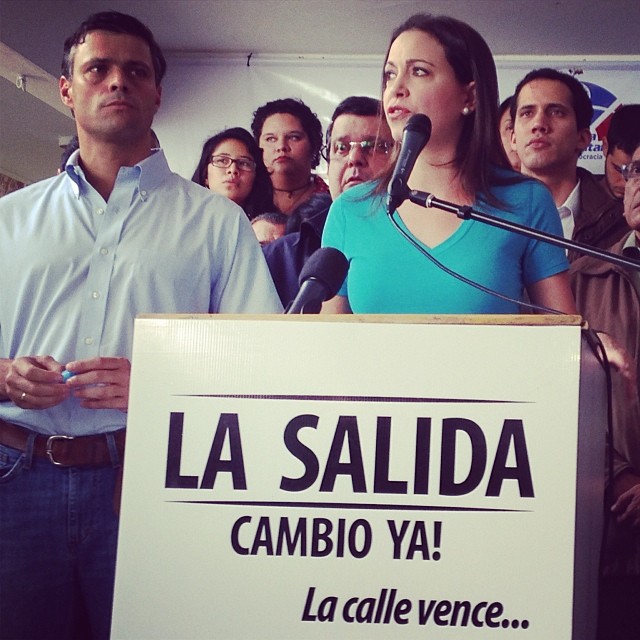 Since the opposition's electoral defeat in the 8 December municipal elections, 'Champions of democracy' Leopoldo Lopez and Maria Corina Machado have repeatedly called protests on the streets of Venezuela, supporting violent tactics in order to force 'an exit' of Maduro's elected Chavista government.
Leopoldo Lopez is current head of opposition party Voluntad Popular, and is charged with corruption for receiving an illegal donation more than $160,000 from the state oil company PDVSA in 1998 when his mother was head of public relations in the company. Lopez was Mayor of Chacao during the April 2002 coup d’etat against Hugo Chavez and instigated opposition demonstrators to march on Miraflores Presidential Palace. In the short 48 hours of the failed coup, Lopez was one of the signatories of the 'Carmona Decree' dissolving the country’s democratic institutions including its National Assembly, Supreme Court, Attorney General, and Public Defender.
Maria Corina Machado is a key opposition member of the National Assembly. In 2001 she founded Sumate, a volunteer civil organisation which led the failed constitutional presidential recall of Hugo Chavez in 2004. A Freedom of Information Act (FOIA) subsequently exposed that Sumate had received millions of US dollars from Washington-based Endowment for Democracy (NED) to fund the Venezuelan opposition. Machado also signed the 'Carmona decree' and her signature appears on the ‘Strategic Venezuelan Plan’, leaked in November 2013. The Strategic plan was drawn up by a cabal of international, US and Colombian organisations, including the viciously right-wing former Colombian president Alvaro Uribe, key leaders of the MUD coalition and the director of USAID for Latin America, Mark Feierstein. It states baldly that its objectives are to
'maintain and increase the sabotages that affect public services, particularly the electrical system, that will enable responsibility to be placed on the government for supposed inefficiencies and negligence;
• emphasise social problems, provoking social discontent;
• increase problems with supply of basic consumer products;
• create ‘situations of crisis in the streets that will facilitate US intervention, as well as NATO forces, with the support of the Colombian government. Whenever possible, the violence should result in deaths or injuries’.
The violence currently being seen on the streets of Venezuela is part of a drawn out plan of destabilisation, the protesting students are one of the many pawns in this game.
The full plan can be found :http://www.chavezcode.com/2013/11/document-evidences-destabilization-plan.html
Sam McGill, editor of www.vivavenezuela.co.uk