Introduction to the Communal Economic System in Venezuela

Helen Yaffe, author of 'Che Guevara: the economics of revolution' and long standing supporter of Rock Around the Blockade, is currently blogging from Venezuela on invitation of Vice Ministry of the Communal Economy, part of the Ministry of Communes and Social Movements. In the run up to the screenings of our new documentary 'Viva Venezuela: Fighting for Socialism' the insights she provides on the struggles to build the communal economy in Venezuela are fascinating. Be sure to keep up to date with her blog here 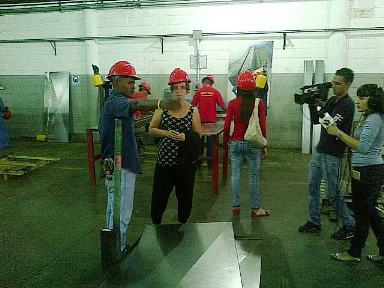 'The invitation to Venezuela came from the Vice Ministry of the Communal Economy, part of the Ministry of Communes and Social Movements. The Vice Ministry is responsible for fomenting production and services within grassroots communities to accompany their political organisation through communal councils and communes. Having read my book, Che Guevara: the economics of revolution (published in Cuba as Che Guevara: economía en revolución) they were interested in discussing whether elements of Che´s Budgetary Finance System could serve as useful tools in Communal Economic System (Sistema  Económico Comunal – SEC) and in other sectors or branches in the Venezuelan economy.
In just five days we have already participated in seminars, discussions, and visits to Enterprises of Social Production (Empresas de Producción Social – EPS) which along with the Family Productive Units, constitute the Communal Economic System.The morning after arriving, we travelled to a mountainous region of Aragua State to join over 70 participants at a two week seminar on Latin American political theory, named after Peruvian Marxist José Mariategui. Most of the participants (still) there are Venezuelans, representing multiple different social movements, communes, EPS, and institutions of people’s power (poder popular). The participants are divided into self-coordinating groups which share responsibility for the functioning of the seminar, thus empowering and training them in the organisational and political challenges involved in this type of theoretical work. Once the seminar has finished, the participants will organise similar seminars in their grassroots constituencies, as part of the process of multiplying the knowledge and skills necessary to empower the population.
On Sunday 22 September, I gave a presentation about Che’s approach to political formation in the transition to socialism. It covered his vision of the role of education: education as culture, political education and education for production; as well as his attitude towards the political and material position of technical personnel and explained how the new salary structure created in revolutionary Cuba served to break the link between work and remuneration, undermining the operation of the law of value in the transition to socialism, and linking personal improvements to national development.The audience engaged with the presentation and appropriated the theoretical and practical principles to their own reality in Venezuela today, discussing contradictions which emerge and the extent to which it would be possible to adopt similar policies in Venezuela – especially those promoting technical training and education for production in general.
The presentation and discussion went on for four hours, with informal discussions continuing on to the following day.On Wednesday 25 September I accompanied the Vice Minister of the Communal Economy, Ana Maldonado to two EPS in Guarenas, 45 minutes outside of Caracas. There are two forms of EPS, one is DIRECT social property – which means that the community in which they are established own, as well as manages, the means of production. The other is INDIRECT social property, where the state (the viceministry) owns the means of production, but the workers manage it. These tend to be larger and more strategic units of production but the intention is that as the workers capacity and commitment increase, these will be transferred under ownership of the community, becoming enterprises of DIRECT social property.In both forms of EPS, the producers elect representatives to administrative positions from among themselves on a two year rotational basis, so that all the workers have the opportunity to develop managerial, organisational and accounting, as well as productive or manual skills.
According to those I met, these administrative workers continue to participate in the productive process when their administrative tasks are completed or when there is a specific need.The enterprises we visited were a carpenters and an ironworks, both of them producing for the Great Housing Mission Venezuela (Gran Misión Vivienda Venezuela) which has already built nearly 500,000 housing units since 2011 and has a goal of constructing 2.6 million new homes by 2019. Both EPS were located within a large warehouse which had been empty for 30 years prior to its rehabilitation for these projects. The nearly 60 workers in these two enterprises are local residents who were unemployed before they joined the EPS. In both enterprises the workers received three months of training on site when they began. They have seen the fruits of their labour as new homes have been erected in their own neighbourhoods and in surrounding states.There are 32 carpenters, half of them women, and including disabled workers.
In a discussion following the tour of the workshop, their “vocera”, their woman spokesperson, explained to the Vice Minister that their production process was being jeopardized because the private company which supplied the specific nails they needed for their production had refused to provide more. This led to a discussion about the problems of dependence on private interests which are politically opposed to the Bolivarian Revolution. The Vice Minister and her team immediately began coordinating with the workers to find a solution.
There are 24 workers in the ironworks, many of them young men, but with a smaller proportion of women. They produce iron doors for the construction of homes under the housing mission. They were clearly very proud of their work and the fact that they had repaid the initial start-up credit provided through a government funding institution and had also generated an ‘excedente’ – a surplus which would permit them to purchase additional machinery.Having read about the EPS and the Communal Economic System it was extremely useful to start visiting those productive units and talking to their workers about what this new productive model means for them today in Venezuela.'