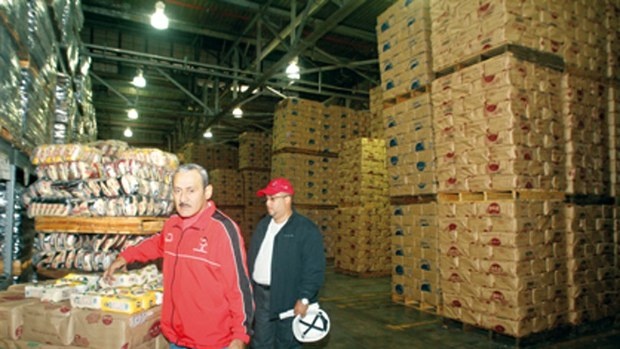 (www.venezuelanalysis.com) Admidst an international media frenzy, desperate to portray Venezuela in crisis, the Mendoza family, oligarch owners of the private food monopoly POLAR, have again been the centre of an orchestrated campaign to create food scarcity and popular dissatisfaction. The opposition are pulling out all the stops in their attempts to destabilize the Bolivarian Revolution.

Following a situation of some minor food shortages, combined with a private media campaign to present the situation as more serious, Venezuelan government representatives have met with private producers in order to resolve the situation.

In Merida city, sugar has been completely unavailable for the last two months, while pre-cooked corn flour, used for Venezuela’s arepas, has only been available sometimes.

Other staples, regulated foods, and commercial foods have been readily and easily available, and the situation is similar in the rest of the country. Most private businesses did take advantage of the end of year holiday period to put food prices up by as much as 10% to 40%.

Some private Venezuelan and overseas media however have made the situation out to be worse than what it is, and have blamed the government. Rightwing Venezuelan newspaper, Tal Cual, claimed today that, “[food scarcity] is the government’s responsibility, the state can’t sustain the amount of imports because of the scarcity of foreign currency. Policies of expropriation and excessive control don’t allow for increasing internal production”.

On Monday, the minister for justice, Nestor Reverol, said 9,000 tonnes of refined sugar that were being hoarded in storehouses in the industrial area of La Victoria, Aragua state, were confiscated. Reverol explained that the raid of the warehouse was thanks to reports from the community.

On Saturday vice-president Nicolas Maduro also said that the government had conducted an inspection of one of Polar’s storehouses in Caracas and found 490 tonnes of pre-cooked corn flour. Polar is the biggest private producer of food supplies in Venezuela.

The discoveries of hoarded goods form part of the government’s current National Plan of Inspection and Auditing that it is carrying out on commercial establishments.

Last month the government, through its goods and services monitoring institute, Indepabis, carried out 1,542 inspections, which resulted in 212 fines and 47 closures of premises, for violating rules.

“Look at the little campaign that some media have waged recently, [saying] that there’s not enough sugar, flour, rice. Why do they do it? In order to create a feeling of nervousness that something is going to happen,” Maduro said.

He said the agreement aimed to prevent products from being hoarded, then sold on the informal market above regulated prices. Maduro added that the meetings also aimed to verify available food supplies, in order to intensify measures against hoarding.

The minister for agriculture and land, Juan Loyo, said that that the meetings will continue next week in order to analyse issues such as prices,  a livestock plan, and importation proportions.

Maduro said that the government’s  strategy in dealing with hoarding was to go “with the law in our hands”, to the food companies and verify their inventories.

“And there’s another way of acting: Once the crime of hoarding is proven, with popular [people’s organisations] intelligence, with an investigation,  then we go, with the law...and with the National Guard, to open the warehouses and to bring out the hoarders in handcuffs, to put them in prison for committing this crime against the people,” Maduro said.

“At the moment we have three months worth of guaranteed food reserves for our country...but the consciousness of people is important, we shouldn’t let them make us go crazy, we shouldn’t go out and buy four packets of each item, every time they tell us that there isn’t any,” the vice-president concluded.

Following the meetings, Polar owner Manuel Larrazal also told the press that his company has “enough primary material to guarantee and to continue producing at full capacity”.

Representative of the private red meat sector, Gonzalo Azuaje also said there was a “full supply” of meat nationally. “We guarantee the supply of this product, which is so important to the Venezuelan diet,” he said.

Food production up and other government measures

On Sunday Loyo told AVN that in 2012 the proportion of Venezuela’s food produced within the country reached 71%. He said the main imported foods were wheat flour and soya flour.

“We ended the year with some good achievements in terms of growth in cereals, especially rice and white corn. [Production of] these two products grew by 7%,” Loyo said.

Local production of red meat was 65% last year, and chicken was 100%, though Loyo said that there was a “deficit in November and December as the national producers had said in August they had full production possibilities but then had problems with chicken feed. This problem was solved with the necessary imports”.

The Venezuelan government created the subsidised food program, Mercal, in 2003, to combat hoarding and price speculation following such measures by food producers and retailers in the aftermath of the 2002 oil strike.

The budget for this year passed by the national assembly at the end of last year also increased funding to these sorts of food programs by 41% from 2012. Also, in 2011 the assembly passed the Law of Fair Prices, enabling the government to put price caps on certain goods and to apply penalties for price speculation.