Published on 12 February 2014 by TeleSUR English 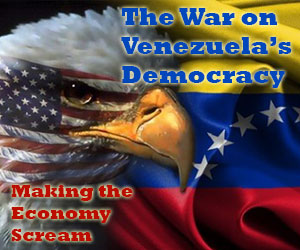 'The War on Venezuela's democracy'

A coup plot against the Venezuelan government has been foiled, with both civilians and members of the military detained, President Nicolas Maduro revealed Thursday in a televised address.

Those involved were being paid in U.S. dollars, and one of the suspects had been granted a visa to enter the United States should the plot fail, Maduro said.

Venezuela’s president stated that the coup plotters already had a “transitional” government and program lined up once the plan, which included bombings on the Miraflores Palace and the teleSUR offices in Caracas, as well as assassinations of members of the opposition, Maduro and others, was carried out.

Maduro explained that a video of masked military officials speaking out against the government had been recorded, which was set to be released after the planned assassination was carried out.

Venezuelan Minister of Defense Vladimir Padrino Lopez stated via his Twitter account that the armed forces remain loyal to the constitutional government.

“The Bolivarian National Armed Forces remain resolute in their democratic beliefs and reject coup schemes that threaten the peace of the republic,” said Padrino.

The four-stage plan involved creating an economic assault on the country, creating an international debate around a supposed humanitarian crisis, a political coup involving officials who would turn on the government, and finally a military coup that would lead to the installation of the transitional program.

Maduro stated that the plot, which was scheduled to coincide with anti-government demonstrations planned for the one-year anniversary of the start of violent, opposition-led demonstrations which began last Feb. 12, was uncovered after military officials who had been approached to participate reported the schemes to authorities.

Maduro called on the Venezuelan people to be on alert and prepared to maintain peace in the country in the face of continued attempts by sectors of the right wing who seek to overthrow the democratically-elected government. 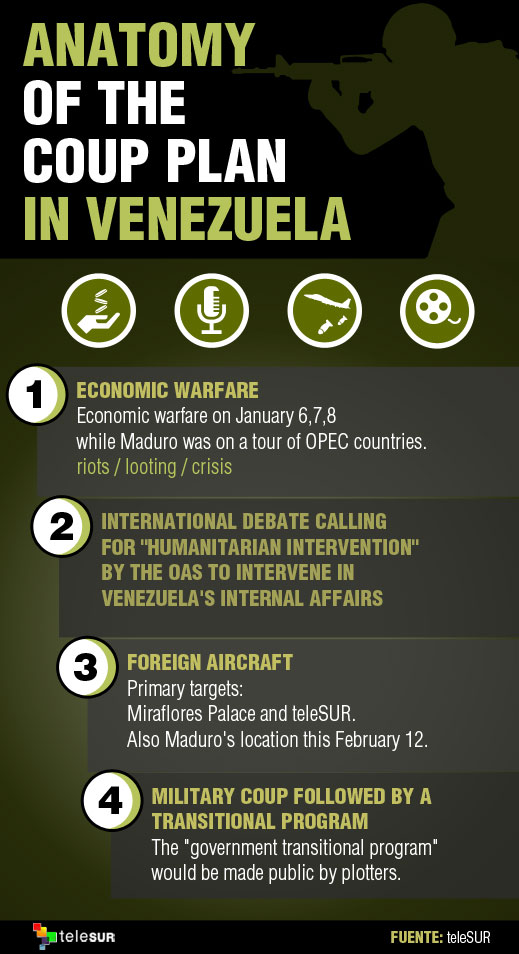 Below is a timeline of how the coup plotters hoped their plan would play out provided by TeleSUR Engish, Anatomy of a Coup.

January 6-8: Coup plotters planned to conduct nationwide operations aimed at creating unrest in the streets. Queues outside commercial stores such as supermarkets were set to be among the primary targets, where operatives hoped to set off violence. Elsewhere, various groups planned to engage in other activities aimed at fomenting destabilization in the streets.

January 9-February: Over the weeks, plotters hoped the country would descend into a state of turmoil, paving the way for the violent overthrow of the Maduro administration.

February 3: Officials at the U.S. Embassy in Caracas tried to bribe people in strategic positions to participate in a coup, said President Nicolas Maduro at the time.

February 12: The coup was scheduled to begin this day. Chavista and opposition rallies commemorating Youth Day were slated as the first targets. Coup plotters planned on attacking the marches to provoke panic in the streets. Then, strategic sites across the capital were to be bombed in a series of coordinated attacks, carried out using a Tucano attack aircraft. The Tucano is a small, highly maneuverable military aircraft manufactured in Brazil, though the U.S. military has purchased a handful for counterinsurgency operations. The sites targeted for bombing included public transport, government offices, mass media and open areas, such as the grandiose Plaza Venezuela. The full list of targets included:

- Headquartes of the Military Intelligence (DIM)

- Ministry of Defense (center of Caracas)

Members of both the opposition and the government – including Maduro – were expected to be assassinated during the ensuing chaos.

Amid the turmoil, media outlets would be forced to broadcast a statement announcing the collapse of the government.

February 13: The coup government was expected to be firmly in control of the country and free to begin rolling back Venezuela's socialist revolution.