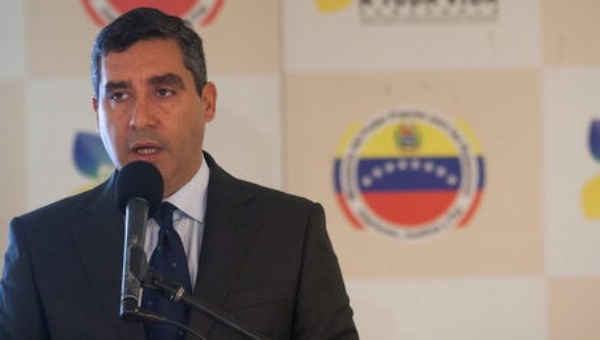 In the interview, the minister explained that this improvement was due to governmental programs, in addition to cooperative opposition mayors and governors of the country. Yet the improvement is still “circumstantial” - it relates only to 2014, and should be converted into a structural one, with a goal of 40 percent reduction of crime over the four next years, he said.

He highlighted the achievements of President Nicolas Maduro's government, among which the implementation of a true policy of citizen security for the first time in the country.

The minister didn´t provide details on the crime figures, arguing they could be used in the media to increase a feeling of insecurity that would not coincide with reality. Nevertheless, he said that in 2012, the homicide rate reached 57 per 100,000 inhabitants (roughly coinciding with the UN records of 53), and this figure has continuously decreased, according to his available data, to 39 at the end of 2013, and to an expected 32 to 35 by the end of this year –  while an acceptable goal would be 10 homicides for 100,000 inhabitants, he added.

The minister emphasized that 76 percent of total homicides were caused by confrontations between criminal groups or criminal groups with the police forces, and did not consist in “insecurity” - that is, attacks and murder of citizens not involved in gangs- but were part of another issue: the culture of violence and guns, especially in poor urban areas. Therefore only 24 percent of homicides occured during a robbery or a kidnapping, and should be considered as part citizen insecurity, in his opinion.

According to his official figures though, the 2014 kidnapping rate would have lowered by over 60 percent, homicides by 18.2 percent, and rapes by almost 50 percent compared to last year. He denied that a reduction of denunciations could be the cause of this drop, arguing that people trust the security forces more than in the past. He admitted that robberies and rapes were still less likely to be denounced.

The minister also called on society as a whole to help solve the security problem, advocating for the participation of citizens, as well as the political opposition in the elaboration of a better security policy.

Addressing the causes of insecurity in Venezuela

Even after a few years of progressive policies reducing poverty and inequality under President Hugo Chavez (1999-2013) – perceived then as the “roots” of violence, the crime rates continued increasing dramatically. During his second mandate, Chavez then initiated a different approach. In 2006, a commission started to work on the elaboration of a new security policy, which resulted in the creation of a centralized national police in 2009, in a bid to address the corruption and lack of accountability of the previous governmental and municipal police forces. This new police force now receives national training based on the principles of a reduced use of force, prevention, and more cooperation with communities.

More recently, the government of Maduro promoted a new disarmament law in June 2013, but the results are uncertain. The daily paper El Nacional reported that one year after its implementation, only 12,603 illegal weapons had been forcefully seized and 84,158 destroyed, according to official figures. This would represent about seven percent of the 1.2 million recorded by the Presidential Commission of Disarmament, while the local NGO Venezuelan Observatory of Violence (OVV) counts 6 million of them.

The director of OVV Roberto Briceño Leon regularly blames a lack of political will as the main factor of criminality in Venezuela, alleging particularly an implicit governmental support of so-called “collectives” of poor urban areas. Most of the opposition media have also echoed this point of view, according to which every social organizations helping communities in the poor suburbs of Caracas (mainly left-winged, and supporting Chavez) is responsible for crime in the country.