'No Volveran!' - ‘They (The Bourgeoisie) Will Not Return!

[RCG 01.10.2012] 'Our greatest weapon is the people, organised and conscious' With this Freddy Bernal, National executive of the PSUV and Deputy of the National assembly, closed his speech to the '7th October, a chance to ensure victory' forum in Parque Central, Caracas. 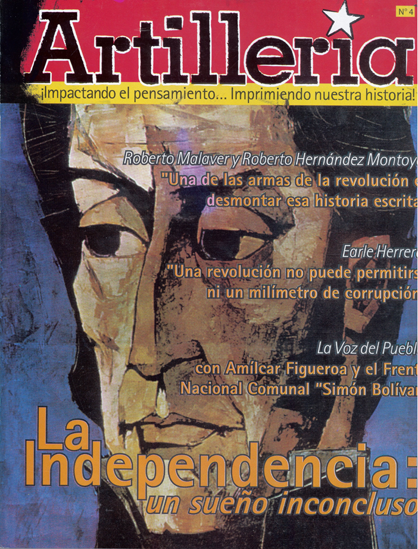 The forum had been organised by 'Artilleria' a magazine produced by the 28 March Movement created to advance critical thought and analyse the revolutionary process. The forum was full of Chavez supporters wearing the familiar red t-shirts, filling the space with chants of 'Uh Ah Chavez no se va' and 'No volveran' demonstrating their firm commitment to advancing the revolution 'past the point of no return' crushing the opposition in the presidential elections this Sunday.

Antonia Muñoz who is also on the national executive of the the PSUV, as well as being a teacher and social activist, also attended the forum and spoke of the need to build the revolution 'with consciousness and heart, we need to change and transform the consciousness of the people, if we can't put the needs of the collective ahead of personal desires, then people will turn to the right wing, for this we need to arm ourselves with political thought'

As Stevenson Delgado, student activist of the 28 March movement emphasised 'the revolution can't just be at the moment of the electons, we have to develop and deepen it, we need to work to develop popular power, in the workers, the students, to continue fighting, Chavez is securing our future, we have to think in order to liberate ourselves'

It was exciting to be part of the popular forum, to exchange our newspaper Fight Racism! Fight Imperialism! with the students who have produced 'Artilleria', the fact that the forum took place in open air, open to all, where members of the government spoke directly to the public with minimal security, shows the connection between the government and the people. People were even passing Freddy Bernal notes, pieces of paper to pass to Chavez.

Bernal left us with this message for the people of Britain:

'Its important the the people of Britain understand whats happening in Latin America and especially in Venezuela, we have a revolution, that is peaceful, constitutional, reaffirmed by the people in 15 opportunities through direct and secret elections, the best in the world. The right calls us a dictatorship, they say we don't respect human rights, that we harbour terrorists.....yet Hugo Chavez, is the best interpreter of the needs of the people that we've seen in the last 200 years of our republic, because Hugo Chavez has taken the oil and placed it in the service of the poor, with health, education, security, inclusion, housing, fundamentally Hugo Chavez has recuperated the dignity of the people......We have retaken our independence, our sovereignty, our liberty,... fundamentally we have developed the inclusion of the great majority. Sometimes it is difficult, from Britain and Europe, to understand the process of change in Latin America, you have to come to Venezuela and speak with the men, women, children, ….to hear the people who have been abandoned, persecuted...thousands of times in the past....how they are now emancipated. We're going to have an electoral process in the next few days, and there will be a confrontation again, with the right who want to return to the past, and ourselves who are defending Bolivarian Socialism, I don't have any doubts, that our people are going to reaffirm a victory this 7 October.'